Victoria has unceremoniously farewelled its daily COVID-19 press conferences, which have punctuated our mornings for 19 months of the pandemic.

Instead, he was joined by Emergency Management Commissioner Andrew Crisp to provide updates on the destructive storms that swept through Melbourne this week.

The deaths of 11 people were announced on Saturday, but Melburnians were out shopping for the first time in months as the state closed in on its target to fully vaccinate 80 per cent of people over 16.

“For the vast majority of the public, people are now moving into a COVID-normal situation where we need to continue to practise good things, but we’re not going to be riveted to the screen or to the online updates of these events in the same way we were,” Mr Weimar said to journalists gathered at the Department of Health offices on Lonsdale Street.

“We’d all love to see less of the COVID commander.”

Mr Weimar stood at the lectern in front of a familiar blue background emblazoned with the words: “Your vaccination is your ticket.”

Not two months ago, then-NSW premier Gladys Berejiklian outraged the public when she walked away from daily updates as the state entered its toughest period. Nine deaths were reported on the day of her announcement, along with 1542 cases.

On Saturday, Victoria was notified of 1355 new cases, although health officials hope we have passed the peak with the lowest daily caseload in more than three weeks.

In August, a handful of cases forced Victoria into its sixth lockdown and jump-started the state’s vaccination rate – along with the infectious Delta variant, which forced health officials to shift tack in early September, in what Mr Weimar identified as one of the most challenging moments of the pandemic.

The Andrews government will still front the media most days on other matters but health officials such as Professor Sutton will not join them except for major COVID-19 news days.

The Department of Health will continue to publish COVID-19 numbers on Twitter and Professor Sutton will send out more details to the media each morning.

Last year, in the depths of Victoria’s extended second wave, hampered by contact tracing, Mr Andrews addressed the media and the public for 120 days straight and became known for his now-infamous North Face jacket. 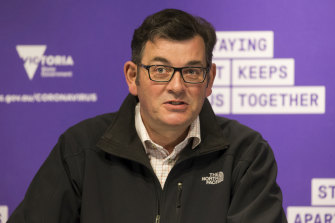 Mr Weimar on Saturday said he might miss some “jostling” with media from the lecturn. But Professor Sutton said he would not.

“I hate to say it, I’m not going to miss you all,” Professor Sutton told media on Friday.

Mr Weimar, who had no experience in public health and previously ran the transport network, said the task of vaccinating the community and managing outbreaks would continue for the foreseeable future and that media was just one fragment of his role.

“It’s been a very challenging two months, and it’ll be a challenging few months ahead,” the bureaucrat said.

“I’m not hanging up the jacket yet. I’ll probably go through a ceremonial burning at some point.”

Stay across the most crucial developments related to the pandemic with the Coronavirus Update. Sign up for the weekly newsletter.