One benefit of somehow landing on the biggest song in the world is that you can suddenly quit your job as a digital sales rep.

“I liked my job and I loved my boss, but every morning when I got in that suit it was like, oh man. I felt like I was meant to be in hip-hop clothes. I’m supposed to be in that astronaut suit up in space, you know what I mean?” 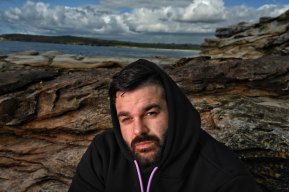 Maroubra rapper Masked Wolf has a worldwide hit with Astronaut in the Ocean.Credit:Nick Moir

After more than a decade of musical hustling, the 29-year-old’s struck gold with the track.

Astronaut in the Ocean, with Michael’s propulsive flow and a slinky beat by Melbourne producer Tyron Hapi that evokes Drake’s Nonstop, has captured the world’s attention, earning over 349 million streams and counting. It’s currently no.17 on the US’s Hot 100 Billboard chart, no.7 on the ARIA singles chart, and is the most Shazamed track in the world.

It’s also the number two song on Spotify globally, a no.1 Spotify hit in countries including Saudi Arabia, Israel, Hungary and Ukraine, and its video has clocked around 65 million views on YouTube. This week even Jennifer Lopez took to TikTok to post a clip of herself in a yellow bikini swivelling poolside to the song’s infectious groove.

“I never expected this to happen,” Michael says. “I went out and celebrated with my friends when we hit 10 million streams and I was completely happy with that, that was a massive achievement for me. What is happening to me now is a bit unbelievable.”

The song’s journey has been remarkable. Originally released in mid-2019 by Melbourne indie Teamwrk Records, it took off post-COVID when TikTokers picked it up to soundtrack everything from parkour tricks to shirtless shopping centre pranks (it’s currently featured in over 250,000 TikTok videos).

“I’ve been comparing it to Scarface,” says Michael of Brian De Palma’s 1983 cult film. “When Scarface came out, no one liked it. It took like 10 years to get recognised and then it suddenly popped off and everyone was like, ‘This movie is sick!’

“That’s kind of like Astro. It took nearly two years and then randomly people were like, ‘What the hell is this? This is so good.’ And then it just blew up.”

Michael says he first started making music at 13, around the time his parents got divorced. A “bottled inside type of kid” living with grandparents who only spoke Greek, he found writing rhymes a “therapeutic outlet to vent what I was feeling”.

But Astronaut, with a hook that subtly touches on his struggles with depression and anxiety, is the most personal he’s ever been on a track, he says. The candour may explain why it’s resonated so strongly with so many.

“When I say, ‘What you know about rolling down in the deep?’, I’m saying to you, ‘What is your toughest moment? Tell me your story as well,’” he explains.

“Everyone has their own battles, people feel bad all the time for different reasons. For me it was feeling depressed, anxious and out of place. But I wanted to give people something that could sit with them on their own personal level.”

The track’s huge success has brought opportunities. In January Masked Wolf signed with Warner Music’s US label Elektra, joining Tones and I as the only Aussie artists on its roster. He’s working on more singles, an album and a tour to utilise his “one window of opportunity”.

“If you don’t seize that moment you sort of fall behind and get left in the smoke, so it’s full steam ahead,” he says.

“It’s crazy. I always said I just wanted to be an artist that made like $500 a week from music and anything on top would be a bonus, so everything that’s happened to me now is unreal. Like, I really can’t believe it. It’s like when you watch a Netflix show and the main character becomes a superhero; I feel like I became a superhero.”