As my then-wife was at the breakfast area of our hotel in Thailand, I could see people around me making noises at something happening outside.

It was Boxing Day in 2004 in Phuket and as I looked over to my wife, suddenly a wall of water as tall as a three-storey building came crashing into where we were sat. The wave hit us at ankle level at first, before the room started rapidly filling with water.

I felt sheer panic but then that survival instinct suddenly kicked in and there was almost no time to think.

My wife just looked at me and screamed ‘run!’ so we held each other’s hands and ran for our lives in the opposite direction of the water. Others in the room were hit by debris and were injured, which we fortunately managed to avoid.

I felt disbelief and questioned whether this was really happening. I had to look back to make sure it wasn’t a bad dream.

We hurried as fast as we could, past at least five badly-wounded people on the floor of the hotel’s breakfast area. They were screaming and crying out desperately for help.

I saw a man in shorts and his shin bone had cracked and was visible. He was reaching out his arm but in this moment, we had to suppress the natural human instinct of helping people as we had to think of ourselves and our own survival.

To escape the breakfast area, we found a fire door, which opened up onto a hill outside. We ran for our lives up it with the water chasing behind us, leaving a trail of destruction.

When we got to the top of the hill, which took us about five minutes, we looked back at the devastation. We witnessed fast-flowing water, that was almost like a huge tide coming in that wasn’t stopping, which had picked up detritus such as trees and ruined items from the hotel.

I initially felt elation because we were safe, but then came the realisation of what had happened. My wife and I sat there and tried to understand, looking in disbelief at what had happened around us.

The next fear was that there was going to be a second wave that was bigger than the first and engulf the whole island. We all thought we had just 24 hours to live. In situations like this, rumours spread like wildfire. 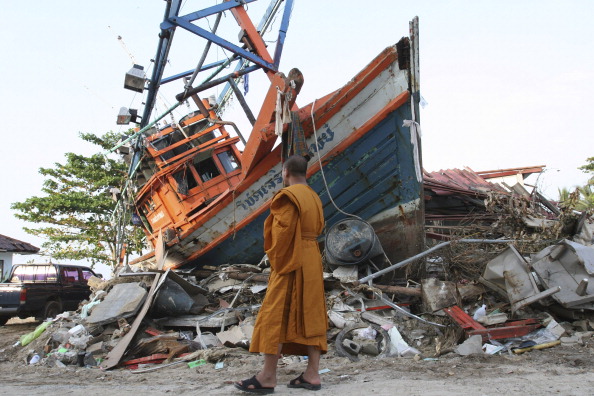 We also didn’t have any phone signal or contact with the outside world. Thoughts were running through my head, thinking what would I do if I got out alive? What would I say if I could speak to my closest friends and family one more time?

I then thought momentarily about all the things that I wanted to do and that I wouldn’t get the chance to do them. That feeling led to deep sadness. My wife and I were sitting on a bench hand-in-hand and said to each other that if we had to die, then at least we would die together.

When everything settled after a couple of hours, we realised the second wave wasn’t coming and we might survive, the next thoughts were about what we would eat. Fortunately, we were able to go back to our hotel room because it was right at the very back of the hotel, which, remarkably, wasn’t flooded.

We were surrounded by dead bodies, as well as animals and insects. This was the most surreal experience of all, and to think that that could have been us. Was the food we eat going to be safe or would we catch a disease?

For the first day, the hotel offered any food they could for free – like sandwiches, crisps, chocolates – then after that, we survived on junk food from vending machines, as there was little else to eat.

For the rest of the day, we were in disbelief at the devastation that was around us. What was meant to be an amazing holiday resulted in the most traumatic experience of our lives. Coming to terms with why we were saved and others lost their lives caused us to be very reflective and thankful.

The next morning, we started the relentless mission to get out of Thailand and failure was not an option.

We went to every travel agent we could find and begged them to help us to get a flight home. There were simply no flights or airlines that were available.

A lot of the travel agents in Thailand were closed due to flooding from the tsunami. It was petrifying to think we wouldn’t be able get back to London, but we were determined and did not give up.

Eventually, after approaching over 10 different people, we finally managed to get a flight for the following day that had a stopover in Jordan for nine hours. Thankfully, we still had our passports with us.

When we eventually got on the plane, we cried tears of sheer relief. My mind was fixated on us taking off, as I knew that once we had, we would be safe.

Even though the hotel we stayed at in Jordan had no heating and at night and it was so cold that I couldn’t feel my feet, the fact that we were out of Thailand and on our way home was the best feeling and a true blessing.

It was only after everything had settled that I figured out two amazing pieces of luck happened to me on the day of the tsunami.

The first was that we initially had asked for a room on stilts on the beach. We didn’t get one so we were at the back of the resort. If we had been given one of those rooms, then it would’ve been flattened by the tsunami and if we were in it at the time, we might not be here today.

The second was that we had planned to go for a walk on the beach at eight in the morning, but the day before this I had a nasty bout of food poisoning, which meant I couldn’t get out of bed. We ended up leaving at around quarter past nine to get our breakfast, planning to go for our walk shortly after. If we had gone for that walk earlier as planned, we wouldn’t be alive.

The mental trauma of the event has stayed with me over the years. I’d regularly ask questions around why I survived when others didn’t. Knowing over 230,000 people across 14 countries died and I wasn’t one of them, I felt gratitude but guilt at the same time.

One thing that remains with me is the people I couldn’t help at the time. At that moment, I had to save myself and coming to terms with that took some time. I’ve heard stories from people we were with who’ve had breakdowns as they couldn’t forgive themselves. I don’t think people can relate to that unless they’ve been in that situation.

Now, whenever I am by the sea and see waves, I get slight anxiety thinking what if something happens again. What if that small wave becomes a big wave?

I’m never 100% relaxed as I know how quickly things can turn. I am now more aware of how a situation so calm and serene can turn into something devastating.

I will never forget the experience. The process of thinking you have 24 hours to live and how that impacts you is powerful.

In this exciting new series from Metro.co.uk, What It Feels Like… not only shares one person’s moving story, but also the details and emotions entwined within it, to allow readers a true insight into their life changing experience.