The people who made Total Control could have been excused for feeling a little smug on Sunday morning. After all, the second series of the ABC political thriller, in which Deborah Mailman plays a free radical wreaking havoc in Parliament House and Rachel Griffiths a conservative prime minister toppled by her own backroom, featured a wave of female independents swept to power on the promise of an end to politics as usual.

Darren Dale, who created the show with Griffiths, says it was born of “a sense of frustration” with a two-party system that felt “a bit broken and increasingly divisive and nasty”. 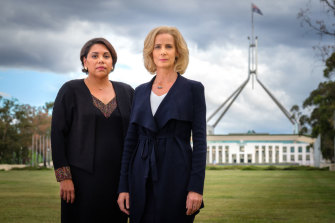 The team at Blackfella, which produced the show, wanted to explore through drama how that system could be challenged “when people who don’t feel represented rise up and stake their claim”.

And that is precisely what happened on the weekend. “To see it play out in such a stunning way six months later is extraordinary and testament to the power of our democracy when the status quo is challenged,” says Dale.

But Griffiths isn’t laying claim to being a latter-day Nostradamus. She feels the series “reflected rather than predicted” a mood in the community, particularly prevalent among female voters.

“I think women have just had a gutful of how politics is done,” she says. “Part of the show’s DNA is that the cost of service for women has been too much.”

She’s referring to the “dark heart and dark arts” of both the party political machine and the surrounding discourse “in the press, in the public, in social media”. She’s also referring to the fact women in politics – and even more so women of colour – are held to a vastly different standard than their male counterparts.

“If a woman looked or acted like Boris Johnson, would she get elected, let alone be prime minister?” she asks rhetorically. “Some girl with egg on her dress and wild hair, who’s on her fourth husband? The double standards are gobsmacking.”

In season two of Total Control – for which Mailman has been nominated for both the publicly voted most popular actress and the industry voted most outstanding actress Logies – six independents are swept to power following the most recent election. “And we thought that was stretching it,” says Griffiths. “We could never have imagined, really, the sea change of the last few years, so I don’t really think we predicted. It was the trend that was there.”

What’s more, she adds, “we failed utterly” to predict the appeal of the Greens. That’s because the writers’ room on the series skewed a little older, which meant “the youth-animated vote was a surprise, and it shouldn’t have been, because all these nice, educated teal ladies are great, but for young people who have just had their university fees doubled and can’t see how to ever get a house they are perhaps not the answer”.

With a third season now in development (though not yet officially commissioned) there’s plenty more scope to probe the mood and aspirations of Australian voters. That said, season two did end with Australia getting its first Indigenous prime minister, something that is presumably not showing up on anyone’s real-world crystal ball just yet.

“We made a very deliberate fork in the road from reality in season two, we’re not doing reality,” says Griffiths. “We are in the multiverse.”

The normal rules don’t apply there, and anything is possible – perhaps even a system where the politicians actually remember who they are meant to represent.

“Most people don’t want their candidate out there getting sound bites,” says Griffiths. “They want them listening to them.”