Warren Kirk's photographs are at once evocative yet mysterious. The Melbourne documentary photographer doesn't provide any detail about his subjects, except the name of the suburb in which they were shot. He's happy to let the images do the story-telling.

"I'm attracted to things that tell a story in some way," he says. "They've got an age on them, they're a bit shabby or rusted; there's a history. It can just be a shopfront or a building or somebody in their living space… It's still story telling, it's not connecting every dot." 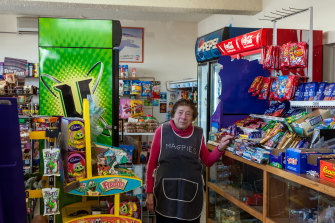 Kirk has used the shutdown to sift through his archive perusing more than 20,000 images shot between 1986 and the mid '90s, selecting 1400, and culling the rest. He has created a new photographic book using the unpublished images, which he has laid out, complete with potential pairings for facing pages.

"It always seemed a Herculean task, with all these boxes sitting there but I really enjoyed it," he says. "I discovered images I have no memory of taking, don't even know where that was. Some images that I have photographed in recent times, I had shot back then.

"There's a bit of simpatico of each page pairing, could be colourwise or topic – shopfronts or cars. That's a bit of a challenge in itself." 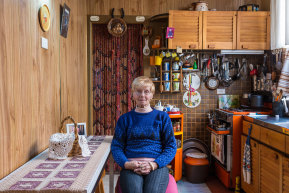 Kirk describes it as Westography mark two, a follow-up to his acclaimed first book, published in 2016. It clearly still has a strong following: at Yarraville's Sun bookshop a month ago, the owner told him she'd had five calls looking for copies. Sub-titled "Images of a vanishing suburbia", it is now out of print. In November, Kirk's Northside was released, a combination of portraits, shops and houses, depicting an old-school reality that is slowly being erased.

Though not a photojournalist, Kirk's work is documentarian. He started more than 30 years ago in street photography, "a very hit-and-miss thing anyway, you're trying to capture a fleeting moment. You get into this habit of photographing things that might work, you're shooting in hope in a way".

With time, Kirk became more interested in the disappearing social landscape. He doesn't tinker with what he sees, shooting pretty much what presents itself, nor does he massage the shots once taken. "I'm particular about what I am shooting now. You can quickly see what the edge of frame is either side here. Very rare that I will crop afterwards. Pretty much what I am trying to do is shoot it through the lens as it will be printed." 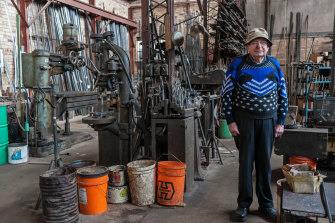 On the question of exhibitions, he is ambivalent, preferring instead to see a body of work in a book form, "it's a more intimate and warmer experience". "There's something sort of elite about that art game, which I can't play."

Kirk argues that Australians are inundated with images from overseas – in TV, film, music and books – but his images strike a chord of recognition, evoking memories for lookers.

He approaches his subjects as he sees them, outside their homes or wandering into workplaces and striking up a conversation. Not many refuse to have their photo taken.

Most people think they're too normal to be interesting subject matter, but Kirk is after the everyday. "Some people are too self-effacing to realise that there's anything so interesting about them. I've probably photographed more Italians than anyone else, [they're] quite proud and very easy to photograph. They're not self-conscious or fussed… there's an openness to life as well, five minutes earlier I didn't even know them." 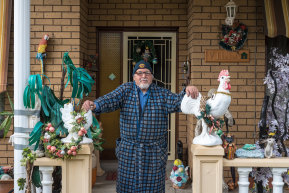 "It's very low-key the way I approach people. What I'm also trying to do is observational, not directing, moving this in or out [of shot], very uncomplicated. Generally they're just wherever they are, or I'll ask, 'Where's your favourite chair'. That's it, the way you are is the way you are. There is no better way for you to be."

Northside is published by Scribe.