William Jackson Harper has found himself in his third hit TV series in just six years.

After making a name for himself — and earning an Emmy nomination for Outstanding Supporting Actor in a Comedy Series — for his role as Chidi Anagonye on NBC’s The Good Place, Harper went on to lead Season 2 of Love Life on HBO Max last year. Now he stars opposite Cristin Milioti in the comedic mystery thriller The Resort which was just picked up from Peacock to appear on NBC Primetime. 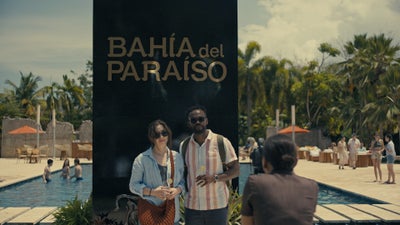 The series which follows a married couple that uncovers a bizarre mystery that occurred 15 years prior on their anniversary trip solidifies Harper’s genius comedic timing. It’s also cemented his sex symbol status which has been on a steady climb since he appeared on our screens as Chidi in 2016. But for the man behind the characters, the labeling is a bit “uncomfortable,” he shares.

“Look, it’s cool, but I’ve never been that guy,” Harper tells ESSENCE. “I’ve just never been that dude. I’ve always been acutely aware of the fact that I’m a little weird looking to a lot of folks. So when that’s not how people are describing me, I’m like, I don’t get it.”

Harper previously spoke about being “terrified” to film his shirtless scenes on The Good Place because he’d been teased as a kid. Despite adopting a disciplined muscle-building regimen since then and even baring his chest for his newest role, he admits some of those feelings from childhood have never left.

“I’m a 42-year-old man and I’ve felt like the funniest looking dude in the room all my life. You don’t just switch that as a whole ass man. It’s cool. It’s nice. It’s a great ego boost, but I don’t know what to do with it.”

Harper, on the other hand, most certainly knows what to do with a good script, which audiences will witness when the season finale of The Resort airs on Peacock tonight. Speaking about his comedic prowess and how it translates on screen with his co-star, he says laughing, “We’re conducting an investigation drunk, but I don’t think we clown it out too much. We definitely go into Scooby Doo territory in our hearts but we don’t play up the clownishness. We try to ground it as much as we can.”

Watch our full interview with William Jackson Harper in the video above.