Woman reveals how her ex waged a ‘sinister’ campaign against her that eventually saw him jailed – including urinating on her car, and drugging her with tablets meant for their pet PUG

A woman has told how her estranged husband launched a ‘sinister’ campaign against her, which included drugging her food with dog medicine and sleeping tablets.

Thomas Ferneyhough, 37, of Great Haywood, Stafford, began tormenting his wife Joanne, 42, after she tried to end their relationship shortly after getting married.

But while attempting reconciliation, Ferneyhough began secretly slipping what Joanne believes were sleeping tablets and dog medicine into her food and tea.

Ferneyhough also hacked her Facebook and sent messages to friends, urinated on her car, and contacted her colleagues telling them she had cheated on him. 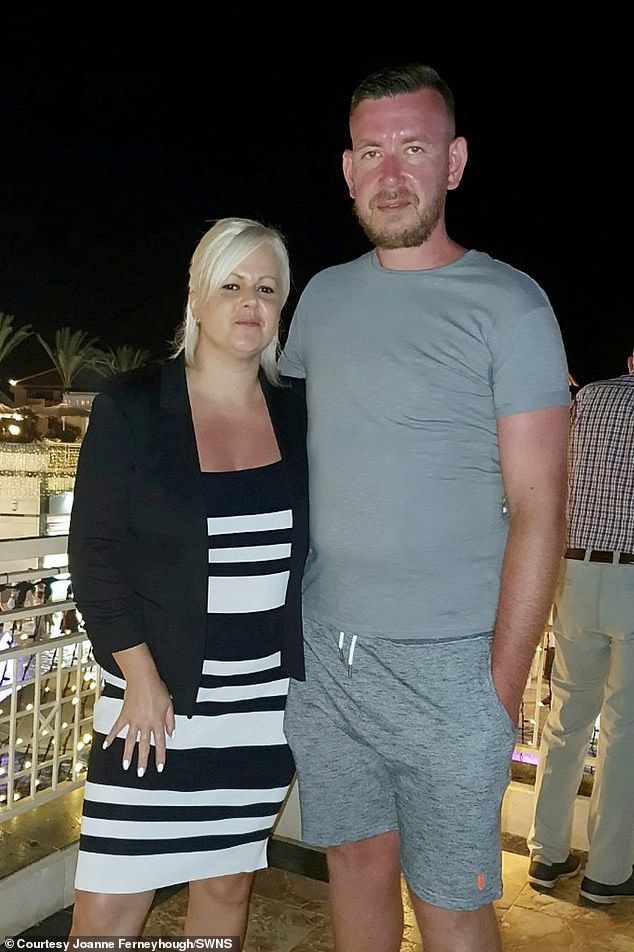 Joanne and Thomas Ferneyhough, of Stafford, endured a ‘rocky’ marriage, which resulted in him embarking on a ‘sinister’ campaign against her. Joanne, 37, has now spoken out about how she believes she was drugged with sleeping tablets and dog medicine

The problems began during their short marriage in June 2017, when Ferneyhough began displaying possessive behaviour.

They attempted to fix their relationship, but Joanne eventually kicked him out of their home in December 2021.

He then threatened to ‘burn the house down’ and continued to harass her over messages.

Ferneyhough then disappeared but sent her audio clips threatening to kill himself and after a search, police found him in a field.

He was arrested and appeared at Stafford Crown Court in August 2022, where he admitted common assault, threatening to destroy property, engaging in controlling and coercive behaviour, and harassment.

He was sentenced to 30 months in prison – leaving Joanne, who suffers from anxiety, to try and build up her life once more. 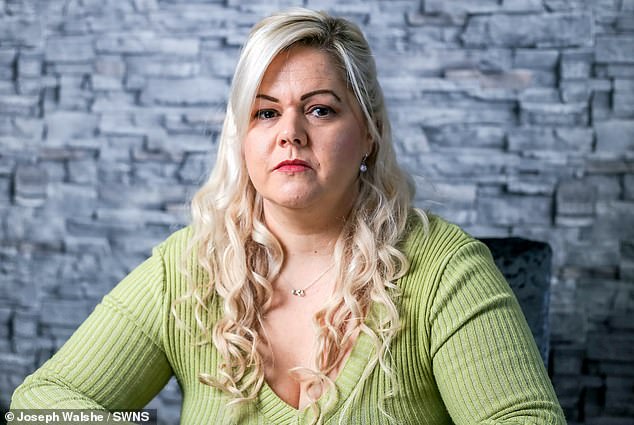 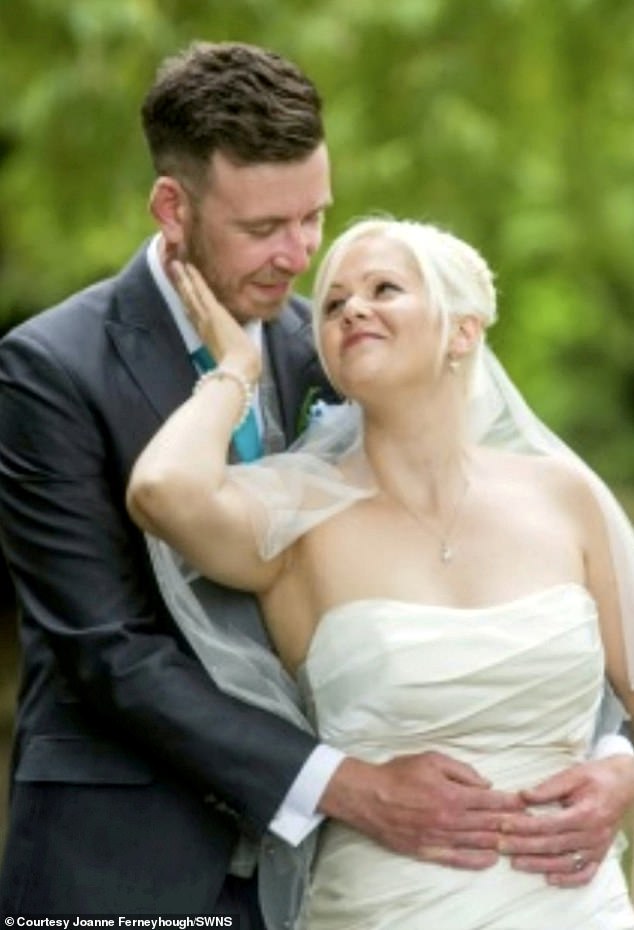 Joanne said: ‘You never imagine the person you love would be capable of such awful things – like drugging you.

‘He once handed me a cup of tea and jokingly said, “I could have put anything in that”.

‘I didn’t think anything of it at the time – I never once thought he was slipping things into my drinks.

‘I’ve really struggled after the whole ordeal, but I’m glad he’s finally out of my life.’

The pair first met in 2014 on a dating app and tied the knot three years later, in June 2017. Within months of getting married, Joanne noticed a ‘possessive’ side to her new husband. 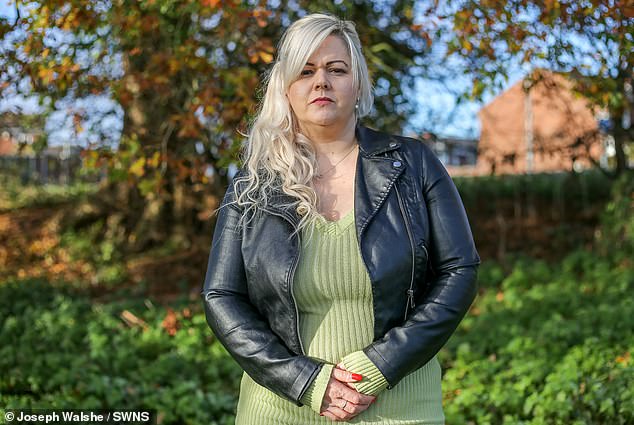 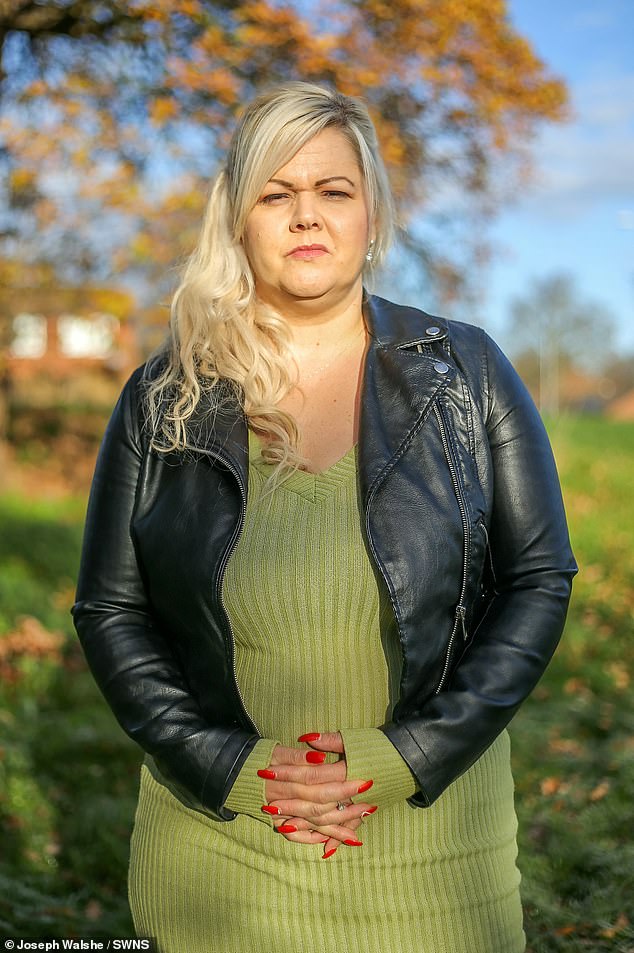 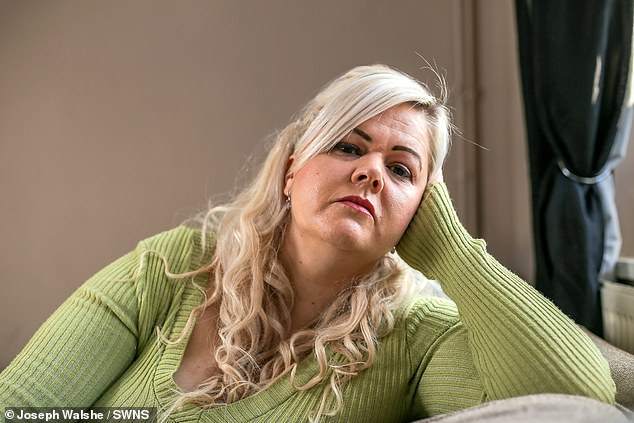 She said: ‘The day after our wedding day he said, “I own you now”. Things continued to go downhill from there. He also had a bad temper – slamming doors and punching holes in them.’

Joanne tried to end their relationship in September 2017, but scorned Ferneyhough continued to contact her.

He turned up at her work, slashed her tires, urinated on her car, and spread rumours about an affair around her office.

Although she got a restraining order, Ferneyhough breached it by continuing to message her.

In October 2017, he was convicted for harassment against Joanne and jailed for 10 weeks. After his stint in prison, Ferneyhough begged for her back, and she decided to give him one last chance.

But unbeknownst to Joanne, her estranged husband had started drugging her food and cups of tea with sleeping pills and medicine she believes were meant for their pug, Bella, eight.

She said: ‘He spent a lot of time reflecting and I really thought he’d changed. 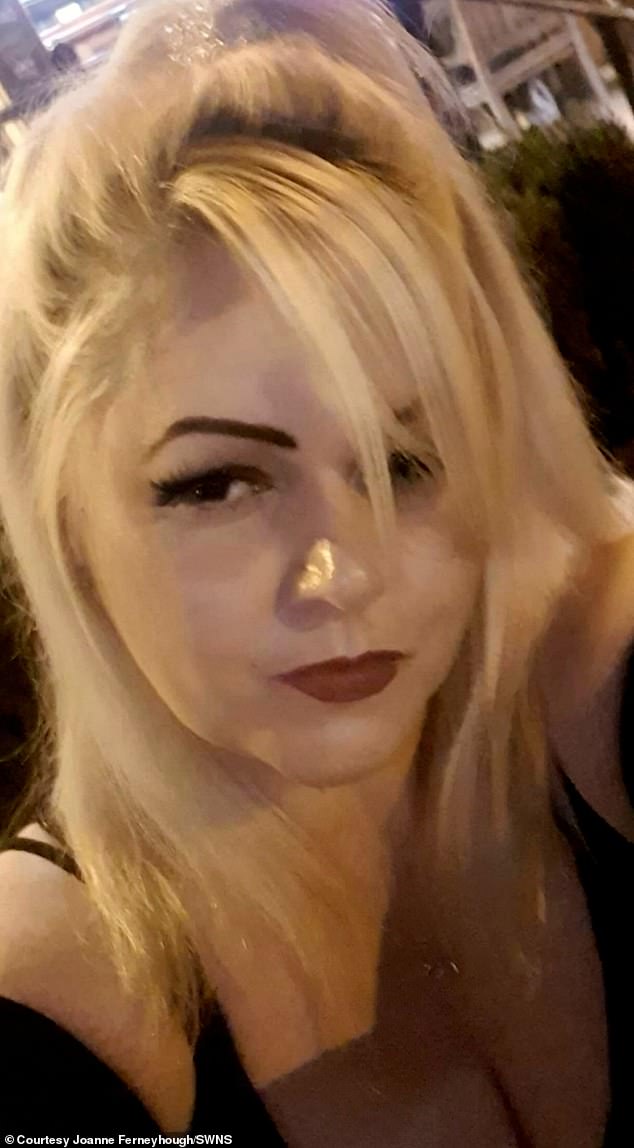 Joanne says that her partner became very possessive after they got married, with him even saying that he owned her 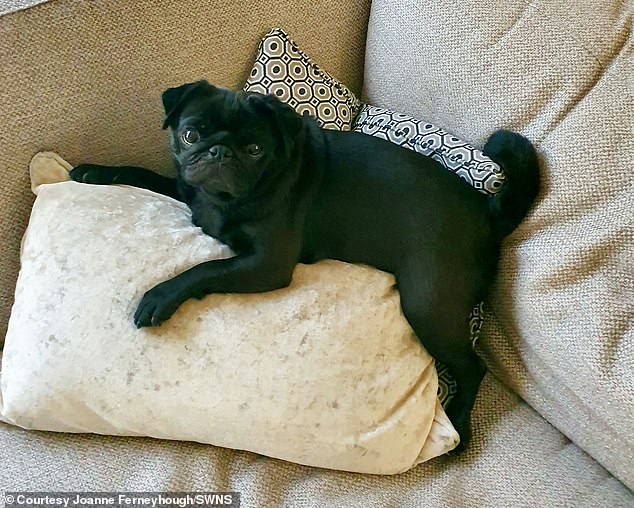 Joanna’s dog Bella: She says she believes she was poisoned by some dog medicine and sleeping tablets

‘In August 2021, I started feeling really ill all of a sudden.

‘I even went to the GP because I was oversleeping and very lethargic all the time.

‘The cup of teas tasted weird, but I always put it down the milk being off.

‘One time, I woke-up to him shaking my arm and when I woke-up he looked so relieved. He even told me he thought I was dead.’

Joanne also noticed his temper creeping back in when she began working from home in August 2021.

Ferneyhough kicked a cupboard while she was on virtual meeting calling her a ‘pathetic b****’ and on another occasion threw a bacon roll at the wall.

She said: ‘He said that there was fat on the bacon, and he didn’t want it – so threw it at the wall.

‘Another time he scrapped his whole plate of tea into the bin after I’d been cooking.’

Joanne kicked him out in December 2021, with him then threatening to burn the house down.

In January, Ferneyhough discharged himself from a mental health assessment and continued to message his wife, sending her audio clips saying he was cutting himself.

After a police search, he was found in a field and Joanne ended things for good with him when he was in the back of the police car.

‘I was constantly looking over my shoulder and terrified of what he might do,’ she said.

‘I eventually spotted the bottle of Bella’s medicine at home was nearly empty, as well as the sleep tablets I had been prescribed.

‘I put two and two together and believed he had been drugging me, using that.’

Ferneyhough was arrested and admitted common assault – which was in relation to the drugging.

He was also convicted for threatening to destroy property, engaging in controlling and coercive behaviour, and harassment at Stafford Crown Court in August 2022.

In mitigation, Stephen Rudge said Ferneyhough ‘does latch on to women’.

He added: ‘Once he is a relationship it is to the point where he becomes obsessed with them.

‘He didn’t want to lose her, but his actions drove her away and made it worse.’

After being jailed for 30 months, Joanne struggled to sleep and suffers with anxiety after the ordeal.

She said: ‘I really hope I can help other women who find themselves in a similar situation.

‘It’s so hard to let someone go when you want to do is help them.

‘But the best thing you can do is get some help and speak out before things escalate.

‘It’s really shaken my trust in men and having a relationship is the furthest thing from my mind.

‘I was very lucky something worse didn’t happen.

‘It’s been a really difficult time but I’m getting to a place where I can look after myself and move on with my life.’