Rosie Perez jokes she was ‘pissed off’ at Woody Harrelson, Wesley Snipes during Oscars

Best star snaps of the week: Bill Murray serenades us and more

Woody Harrelson shared how flattered he was after a mom compared the actor to her baby girl named Cora.

“Ok but how does our daughter look like Woody [Harrelson],” the mom, Dani Grier Mulvenna wrote in a post to social media along with a side-by-side photo of her little girl and the “True Detective” star both flashing big smiles that looked eerily similar.

Harrelson, 61, shared a screenshot of the post with a sweet poem dedicated to the little bundle of joy.

“Ode to Cora-/You’re an adorable child/Flattered to be compared/You have a wonderful smile/I just wish I had your hair @danigriermulvenna,” Harrelson joked in the caption of his post on Thursday.

The little girl was seen wearing a pink sweatshirt with cute bunnies on it as she flashed a smile and had adorable blond hair sprouting from her head. Meanwhile, Harrelson was seen in the photo wearing a black cowboy hat.

The mom responded with utter joy at the shoutout from Harrelson and took to the comments section to share her excitement. 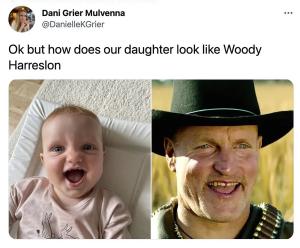 Several other fans flooded the comments section to gush over the hilarious comparison.

“Your baby doppelganger,” someone said, with another agreeing, “I actually thought that was a young pictures of woody!”