A record number of workers – nearly 900,000 – are working two or more jobs as younger Australians in low-paid jobs scrambled to keep up with the cost of living.

Jobs data from the Australian Bureau of Statistics shows that in the 12 months to September the number of workers with multiple jobs rose to nearly 900,000, and a record high of 6.5 per cent of all workers hold more than one job. 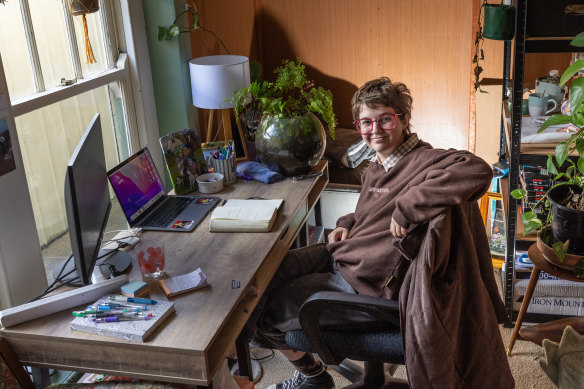 Is Hay worked up to six jobs at a time during the early stages of the pandemic, and now has three jobs.Credit:Jason South

“That shows us that people are now more likely than ever before to be working more than one job, although it’s only still slightly above where it was,” said the ABS’s head of labour statistics Bjorn Jarvis.

There are 895,900 people with multiple jobs in Australia. More than 13.8 million people are employed across the country.

Asia-Pacific economist for Indeed, Callam Pickering, said there were two main reasons for the increase in people working two or more jobs – the record-high availability of work and the cost-of-living pressures. Inflation is at 6.9 per cent, while wages have risen by 3.1 per cent over the 12 months to September.

“We obviously have a bit of a cost-of-living crisis, and that’s created the need for a lot of people to take on additional work in order to meet obligations, whether it’s rising mortgage rates or other things that they need to buy,” Pickering said.

“So it’s a decision made by necessity, rather than a choice to increase your hours because you had that opportunity.”

Disability advocacy worker Is Hay needs to work 30 hours a week to cover expenses, but the precarious nature of casual work meant their hours, and income, sometimes falls short.

“Some weeks I have more than I need, some weeks I don’t have enough,” they said. “It’s a constant grind of job seeking, job doing, jobs ending contracts.”

As an immunocompromised person, Hay said it was challenging to find employers that offered positions working from home, so they had to be “very selective” about where they could seek work.

At one point early in the pandemic, they held contracts with six separate employers as only a few of them were able to provide regular and consistent work that met their access needs.

Hay said they felt “exhausted” by the lack of steady income and that losing work at short notice was not uncommon.

“We’re often only seen as valuable for a particular amount of hours per week,” they said.

The number of secondary jobs was highest in health care and social assistance, education and training and administrative and support services, and Pickering said these industries generally had lower-paid workforces.

“Low-paid workforces are a key part of why people have to take on additional jobs, they’re not getting the hours that they’re looking for in their primary job,” he said.

About one in every 30 jobs (3.2 per cent) were vacant in the three months to September, according to the ABS data, a record high. Pickering said that means there is about one job available for every person looking for work.

“There are a lot of jobs available. And therefore there is the opportunity to take on additional work if you want to,” he said.