‘Healthy’ young woman given just weeks to live after a tiny mole on her foot turned out to be terminal cancer shares ‘unnerving’ detail about spending her final days in palliative care: ‘Shaken to the core’

A young writer who has been given weeks to live after a tiny mole on her foot turned out to be terminal cancer has shared an emotional update on her journey in palliative care.

Natalie Fornasier, 28, revealed it has been four weeks since she first started to receive end-of-life care as she continues to battle a deadly melanoma.

She was diagnosed with the cancer at 20 when a mole on her toe suddenly changed shape but was told by doctors it had become terminal in July.

Natalie broke the news on Instagram in December with her post sparking an outpouring of grief from the community, including A-list celebrity Chris Hemsworth.

She provided an update on Thursday revealing her health had deteriorated significantly over the last month as she receives end-of-life care. 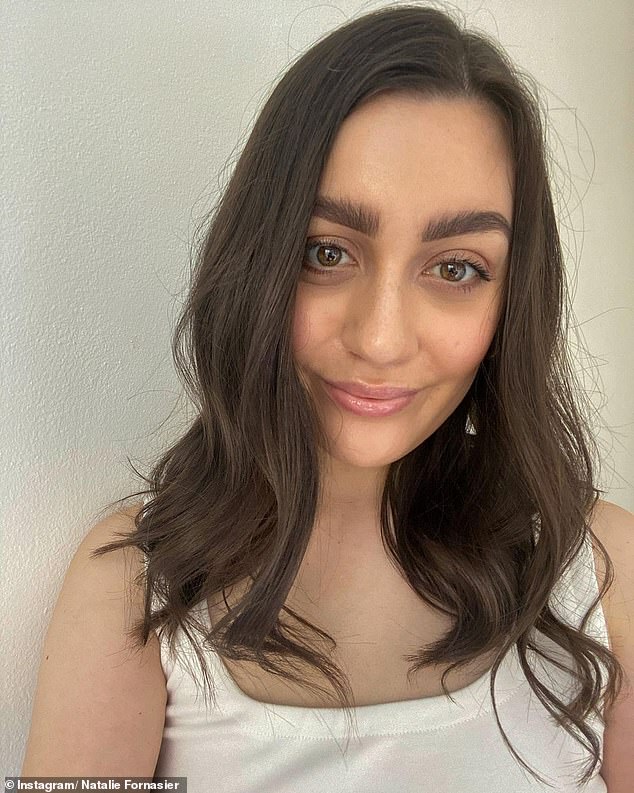 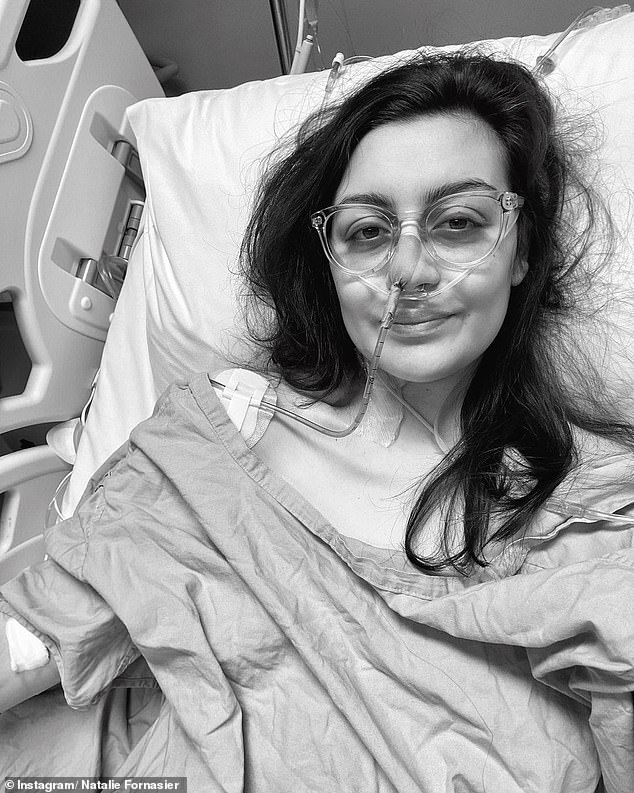 Natalie Fornasier, 28, revealed it has been four weeks since she first started to receive end-of-life care as she continues to battle a deadly melanoma

‘Today marks four weeks in palliative care. It’s absurd it’s been that long – time is so fluid, it feels like none has gone by but the calendar says otherwise,’ she wrote.

‘I miss my home incredibly – I miss my trinkets on the fireplace sitting pretty and my couch that basically swallows you. I miss my kitchen.

‘I even miss the possums in the roof. But I can no longer walk without aids, my legs are filled with fluid, my whole body aches 24/7 and the tumour burden is intense.’

Natalie said she could feel her body become weaker with each passing day.

‘My pain is increasing slowly, day by day I can feel my body slow just that little bit more which is such a bizarre thing to witness – especially when you can physically feel it too,’ she wrote.

‘However these yellow tinged walls with creaky old doors is the best place for me to be – it’s safe (and fully stocked with all the meds I need!).’

Natalie said she was cherishing every moment that she had with loved ones while she was still able. 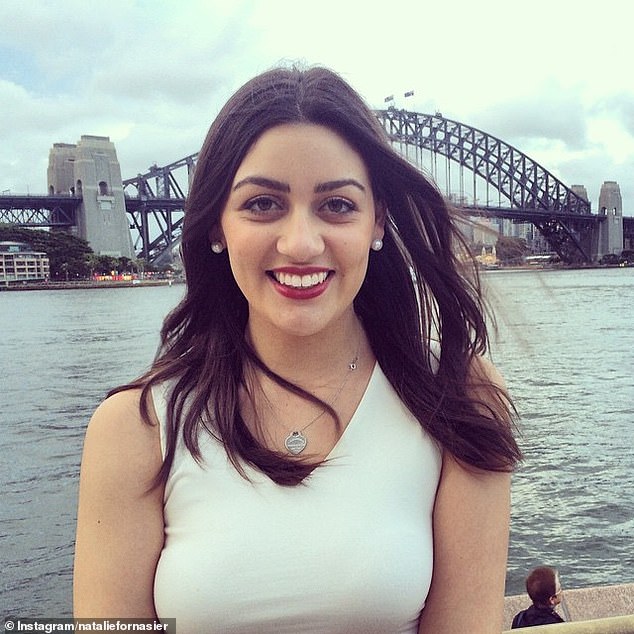 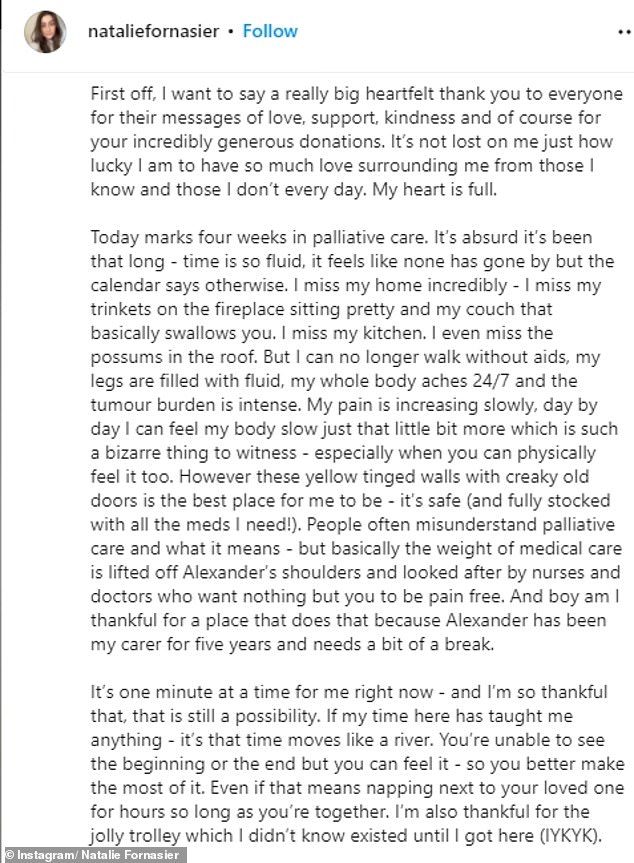 ‘It’s one minute at a time for me right now – and I’m so thankful that, that is still a possibility,’ she wrote.

‘If my time here has taught me anything – it’s that time moves like a river.

‘You’re unable to see the beginning or the end but you can feel it – so you better make the most of it.

‘Even if that means napping next to your loved one for hours so long as you’re together.’

She shared her gratitude at the outpouring of support she had received since making the heartbreaking update about her diagnosis.

‘I want to say a really big heartfelt thank you to everyone for their messages of love, support, kindness and of course for your incredibly generous donations,’ she wrote.

‘It’s not lost on me just how lucky I am to have so much love surrounding me from those I know and those I don’t every day. My heart is full.’ 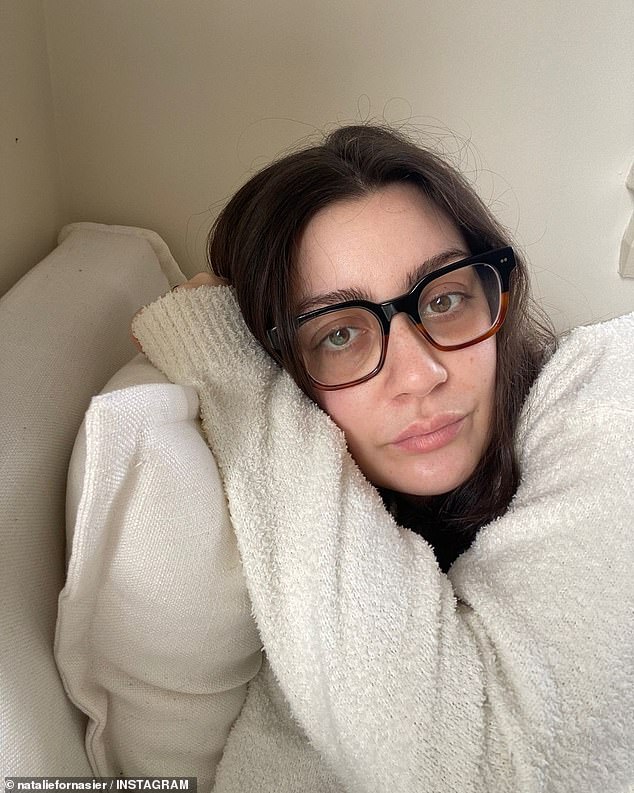 Natalie’s battle with melanoma has sparked an outpouring of grief from her followers including Hemsworth, who worked alongside her while filming his new National Geographic series ‘Limitless’.

Melanoma is a type of skin cancer which usually occurs on the parts of the body that have been overexposed to the sun.

Often melanoma has no symptoms, however, the first sign is generally a change in an existing mole or the appearance of a new spot.

These changes can include:

He told his millions of followers that Natalie, who appeared in the sixth episode of Limitless, was, unfortunately, not doing well.

‘I, like so many of you, continue to be moved by her story and even more impressed with her positivity,’ he messaged.

‘Natalie is a person who displays perpetual grace in the face of adversity; she is kind, selfless, and brave in how she continues to tell her impactful story openly.’

The Hollywood legend said he hoped that Natalie’s, ‘strength, perseverance, and dignity inspires you today – and every day.’

In a previous post on Facebook, Natalie said the word ‘terminal’ had terrified her since her first diagnosis for one reason: it was always a very real possibility.

‘The last four months have been brutal. At the end of July, I received the news that my cancer was now terminal and had months left to live,’ she wrote.

‘I’ve cried myself hoarse about the fear of death. I’ve screamed for the children I would never have, growing old, my friends, the life I was supposed to live.’

Natalie has dedicated years to raising awareness to the dangers of skin cancer, but admits she never thought she would have to enter the ‘dying’ frame of mind.

‘At 28 years old… everything about it feels wrong. The conversations I’ve had to have, the plans I’ve had to make, the places my thoughts have gone and are still going – none of it is natural. It’s painful,’ she said. 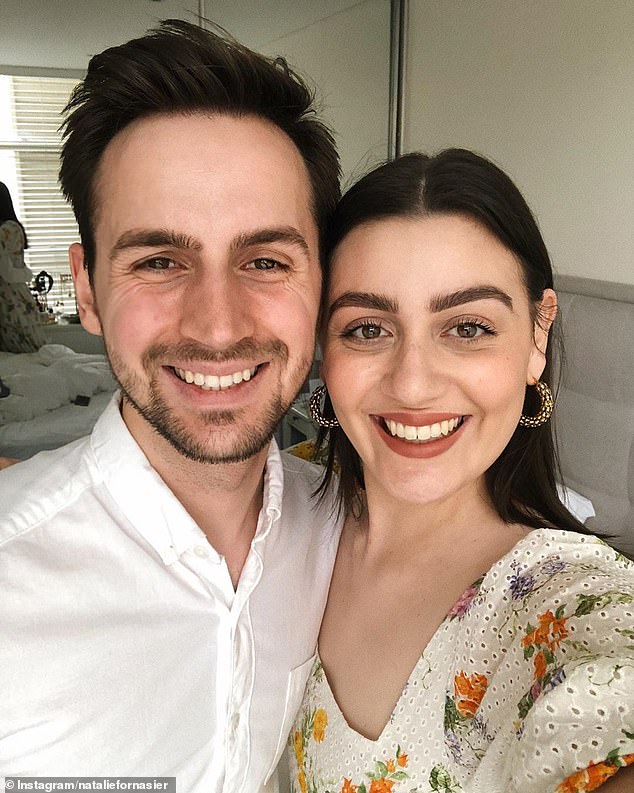 She is especially devastated for her loved ones.

‘I’ve fallen into oblivion crying for (boyfriend) Alexander, the heartbreak, and the love I would be leaving – for the life we were supposed to have. I’ve cried for my family.’

She went on to celebrate reaching her life goals.

‘My one goal in life was to love. I’ve experienced a love that is all consuming – something so deeply precious and powerful and soul changing that I know that even though I’m leaving this earth, that energy and love will never die.’