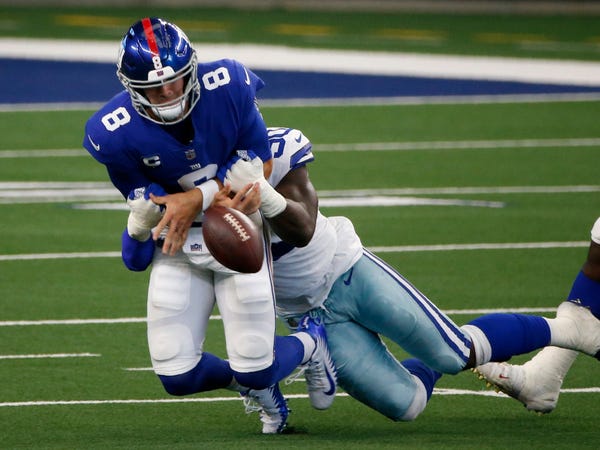 The term "dumpster fire" has been overused in recent years, but few descriptions are more befitting of the NFC East's current state.

The NFL is a league known for parity. In the NFC East, so far this season, it has meant that all four teams are playing at a fairly equal level of absolute mediocrity.

This year, the Dallas Cowboys, Philadelphia Eagles, New York Giants, and Washington Football Team have a combined record of 4-15-1. That record drops to a terrible 2-13-1 mark in games played against teams not in the NFC East. According to FiveThirtyEight, the NFC East's collective quality through five games is as bad as any division in football history dating back to 1970.

Again, dumpster fire is really the only way to describe it.

But as bad as things are, they can get worse. Much worse. And since the NFC East is a division of the NFL, one of these teams will be bound for the postseason regardless of how bad their record is compared to more deserving teams come the end of the year.

So just how bad a team could we possibly see reach the playoffs out of the division? Let's take a look.

Here are the NFC East standings through five weeks of action:

Each team in the division has six games remaining against opponents outside of the NFC East. Let's imagine for a moment that the division goes a devastating 0-24 in those games, bringing us to this point:

Pretty bad! Thankfully, given how the schedule plays out, the NFC East's standings will never look this bad on paper, but in terms of how these teams are playing against opponents that aren't of a similar level of badness, things are pretty bleak.

Where things really get wonky are the intra-divisional games. Discounting the prospect of a slew of ties overtaking the division (which, to be fair, is still entirely possible), when these teams go up against each other, someone is going to go home with a win, no matter how undeserved.

Should the worst happen, it's technically possible that a 4-12 Washington Football Team could sneak into the playoffs with the final standings looking like this:

In this scenario, Washington would be into the postseason over Dallas based on the tiebreaker of divisional record, with Washington splitting their season series against Dallas and going 4-2 against the NFC East as a whole, besting the Cowboys 3-3 divisional record.

According to FiveThirtyEight, several other "doomsday scenarios" exist for the NFC East. In one of their 50,000 simulations of the division, a 4-12 New York Giants team takes the division thanks to tiebreakers. A 5-11 Cowboys team and 4-11-1 Eagles team could also slip into the playoffs if things break their way.

There's no reason to panic just yet. The chances of all four teams in the NFC East refusing to win a game against teams outside of their own division are extremely slim, and parity — there's that word again — would dictate that one of these teams finds its way back to playing something like even-keeled football at some point over the next few weeks.

But as things stand, the NFC East is in a pretty bad spot, and it's unclear which team will emerge, like a phoenix, from the dumpster fire.