The Gabba has been locked in to host the first Test of the 2021-22 Ashes series alongside confirmation the Brisbane venue will soon undergo a $35 million facelift.

The Queensland government announced the redevelopment plan for the Test and Aussie rules ground on Saturday. 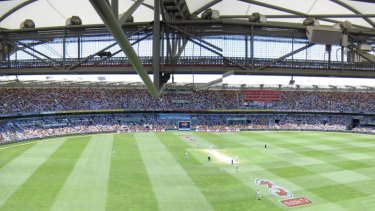 The Queensland government will spend $35 million on refurbishing the Gabba.Credit:Ross Duncan

Public, corporate and media facilities at the Gabba will be upgraded before it hosts matches during the 2020 men's Twenty20 World Cup.

Cricket Australia broke with tradition last year, scheduling the first home Test of the season in Adelaide rather than in Brisbane.

Australia lost that match and went on to suffer their first home Test series loss to India.

Tim Paine's team have made it clear to CA their strong preference is to start every Test summer at the Gabba, a venue where Australia haven't lost a Test since 1988. 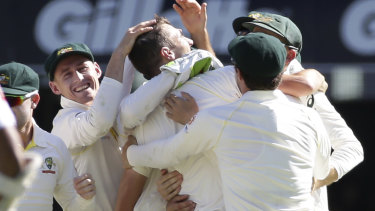 Can we play here every Test: The Gabba is a happy hunting ground for the Australians.Credit:AP

That request was approved in this summer's schedule, with the first Test between Australia and Pakistan to start on November 21 in Brisbane.

"The players are pretty happy to be back there for the first Test."

England have lost four of their past five Tests at the Gabba, with the exception being the drawn first Test in 2010 that set the tourists up for a breakthrough series win.

"The Gabba has one of the best wickets in the world, and we want to ensure fans are getting an experience to match in the rest of the stadium," she said, on Twitter.

"The Gabba under Labor has fallen into disrepair and become a second-rate stadium compared to others in our country," he said.

"Other state governments are investing hundreds of millions of dollars to upgrade their facilities to attract the best sporting events.

"Here at the gabba, we’ll simply get a bit of money to put a lick of paint on it."