ALEKSANDAR MITROVIC will soon be able to open an art gallery if he keeps dominating the Championship.

The Fulham striker has been voted the PFA fans’ player of the month in English football’s second tier for a THIRD month in a row. 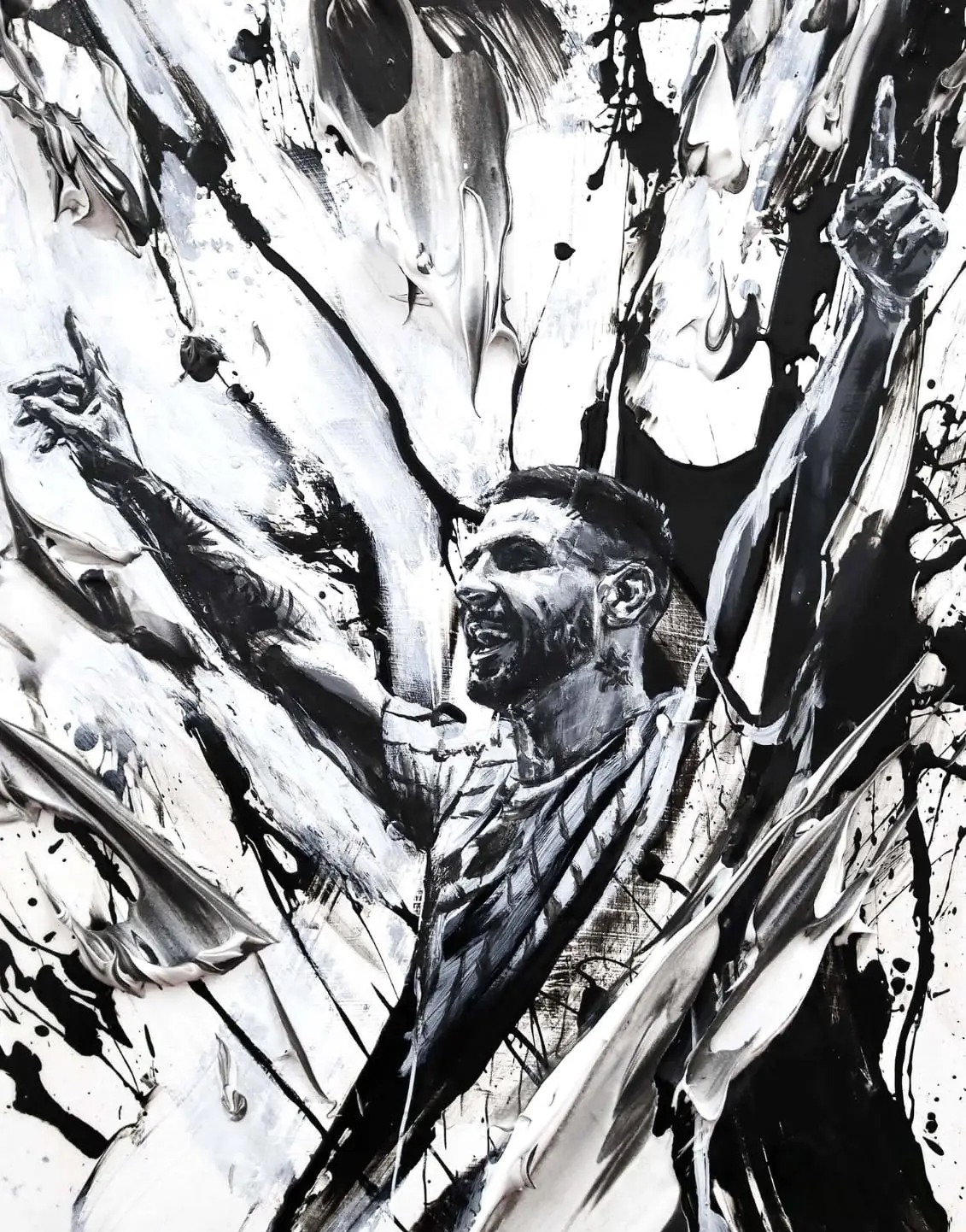 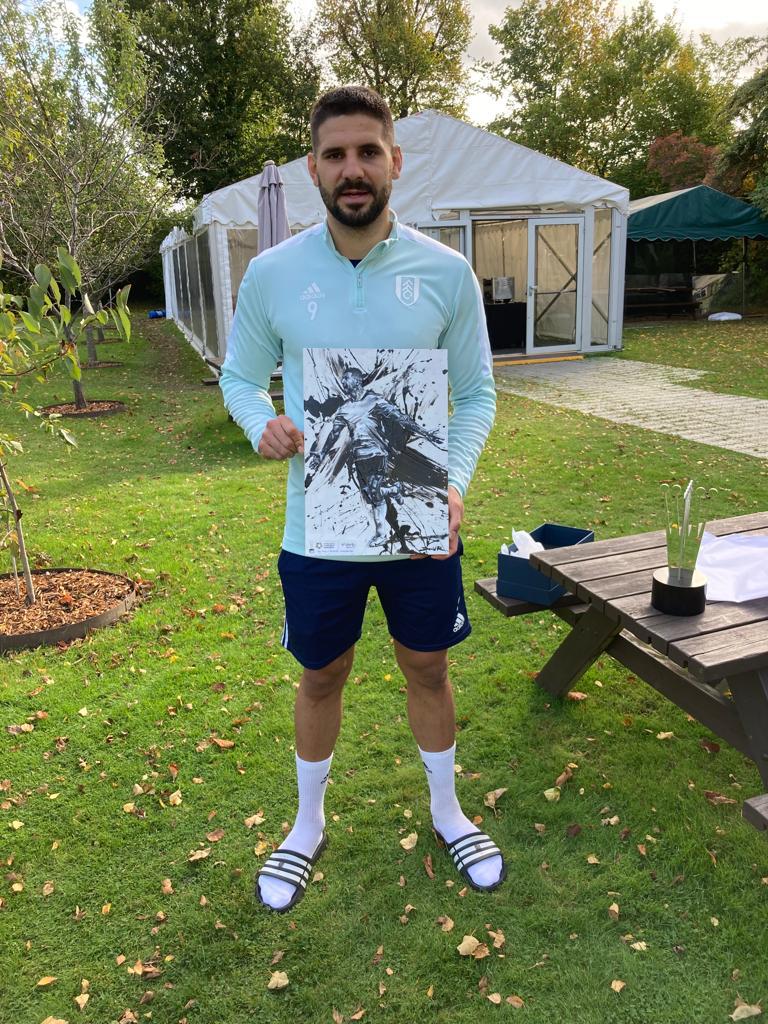 And – as part of the special awards – the winners each pick up a beautiful painting of themselves, depicting one of their month’s highlights

Birmingham-based Romanian artist David Roman, 30, was commissioned to get his acrylics out at the start of this season.

He said: “The PFA and the sponsors Vertu Motors were looking for a sports artist to do custom-made artwork that would be presented with a trophy each month.

“A researcher got in touch and we talked about the idea and it was aligned with what I wanted to do.

“It’s about working with pro athletes and champions as well as creating exciting art.”

It is hoped the memorabilia will help raise awareness of the PFA awards beyond its traditional audience.

Roman invited us to his studio to see him at work on this month’s winners.

Liverpool’s Diogo Jota won the Premier League gong for November while Burton’s Daniel Jebbison won in League One while Jamille Matt of Forest Green was victorious in League Two.

David said: “I do a portrait of each player, usually with the athlete moving rather than just the face.

“What I look for is whether they’re in a flow or one of those winning moments where you can feel the energy at that time.

“It must be either at that moment or just after when they’ve very happy. The art must be driven by emotion.”

Roman and the PFA select the moments they feel work best for a painting from shortlisted photos provided by picture agency Getty Images. 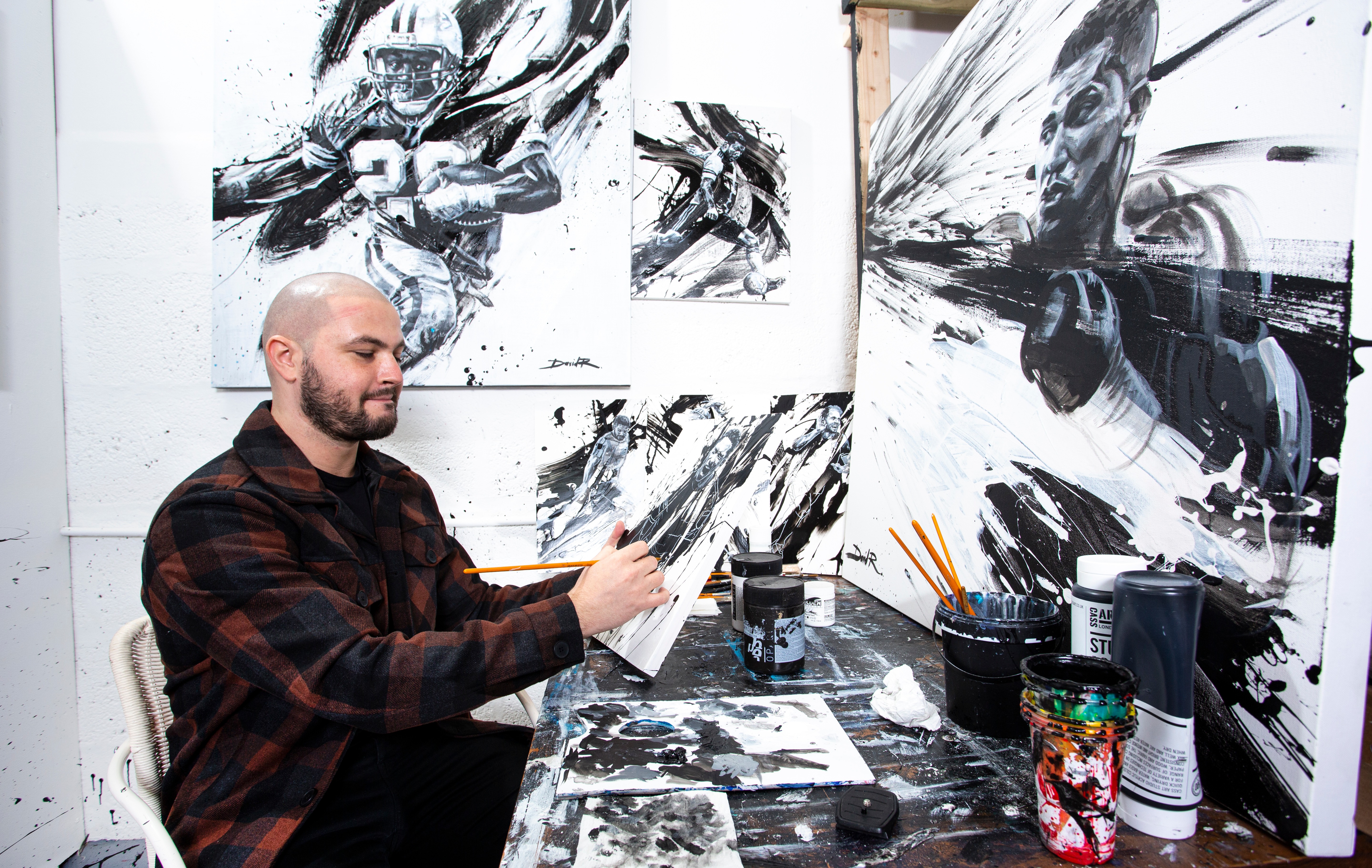 He said: “The paintings are done in my personal way, which is with acrylics and I’ve developed a textured multi-layered style which is a result of me chasing how to capture best the movement and energy.

“It’s all done with newer materials, is experimental and heavily textured. I paint them on wood panels which are all A3 size.

“I work on all five at the same time at different stages – and am so relentless. I only have one week to turn it around – so it’s intense.

“Obviously I’d prefer to work a little slower. It sometimes takes a week to do one of my own paintings – but I don’t have that luxury.

“But I’ve been pleased with the results.”

Roman’s favourite painting so far was of Liverpool’s Mo Salah – a personal labour of love because he is a huge Reds fan. 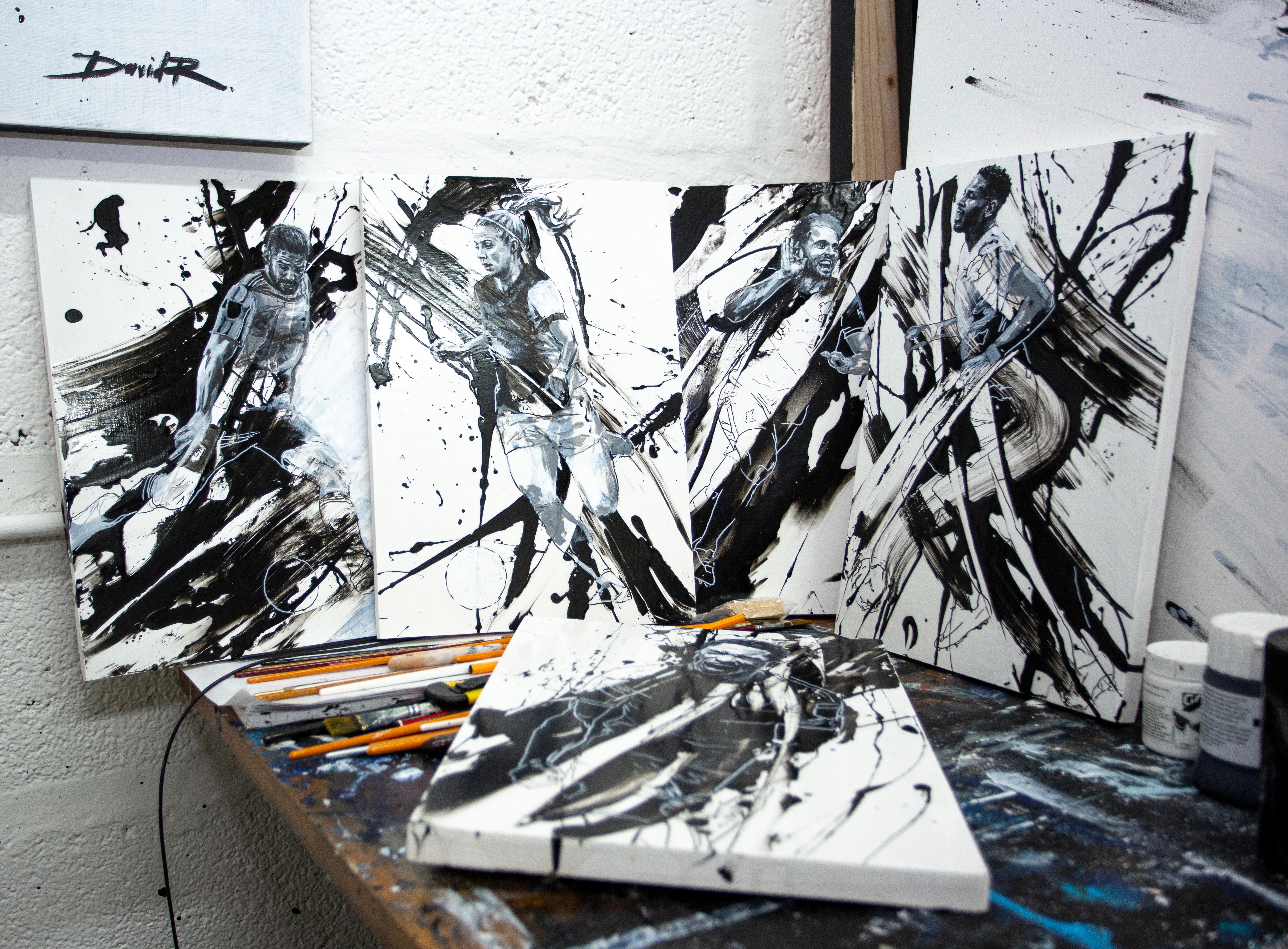 But he revealed his most challenging was when Mitrovic won the October gong.

He said: “Aleksandar was shouting with joy. You could see his smile but it was from a lower angle so his teeth were showing. They were difficult to get accurate.

“I spent a whole day working just on his face.”

Roman hopes that his own hero Salah and other players enjoy the paintings and even find somewhere at home to hang them.

He said: “I’ve had good feedback from players, who have shared the art on their social media.

“It’s great to get a trophy but getting a piece of art recording an emotional moment just makes it extra special.”

JOHNNIE JACKSON’S appointment as Charlton boss could be proof that if something isn’t broke, don’t fix it.

The Addicks legend had been doing an excellent job as assistant to Lee Bowyer and probably should have got the nod in the first place. 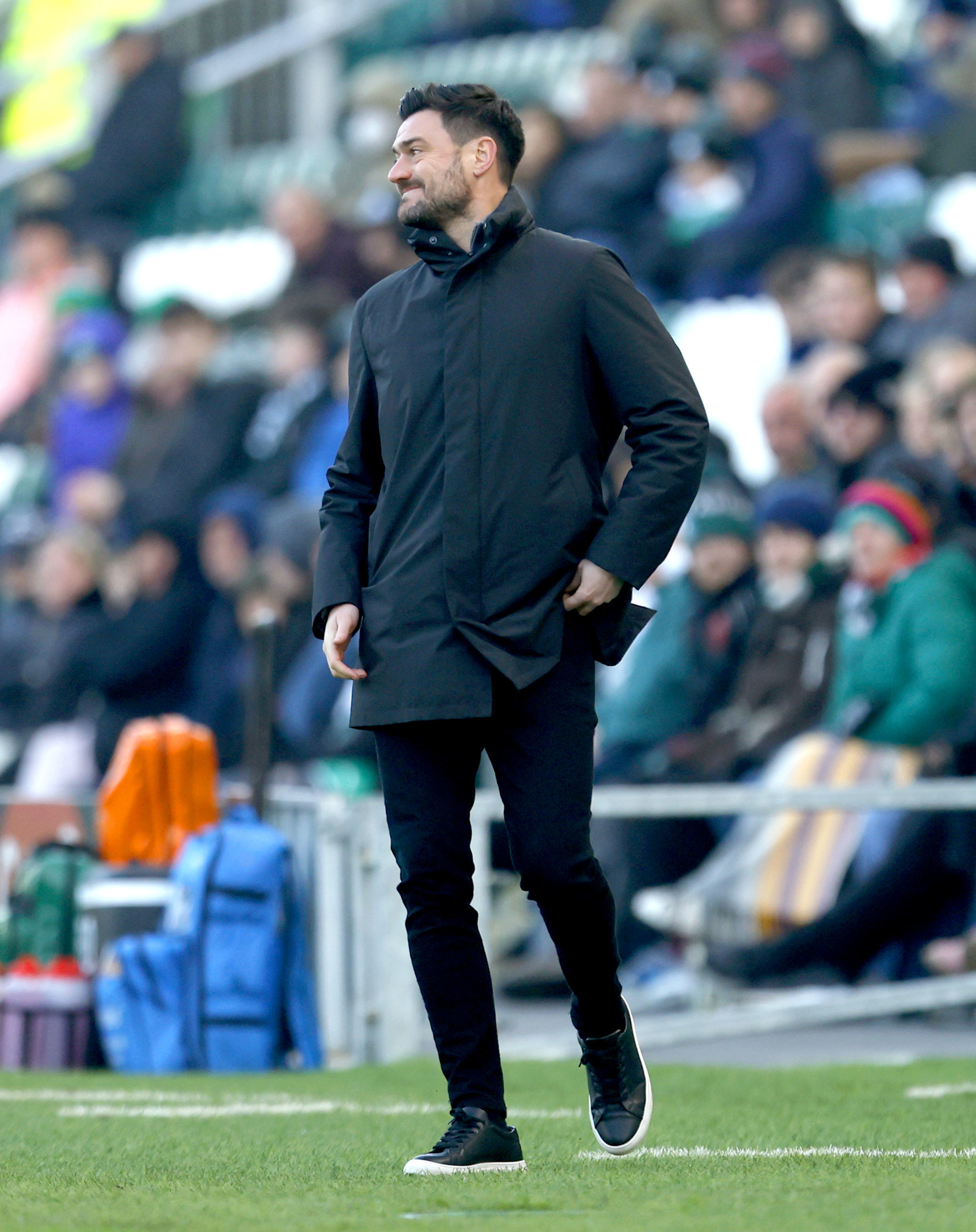 Nigel Adkins could not fire up Charlton this season but, with the same set of players, Jackson has won nine of his 14 games in charge, losing just two.

Now they just need to make their ultimate legend Alan Curbishley director of football and they will have the perfect combination.

IT'S JUST THE JAB

EFL footballers need to come to their senses and get vaccinated.

It is staggering that a quarter of players across the Championship, League One and League Two have no intention of getting jabbed

59% of players are double jabbed

6% of players intending to get a jab

25% of players not intending to get vaccinated

Of course, there will be players who have genuine concerns about their health. But, seriously, one in four footballers should not have any serious worries at all.

Maybe if these footballers actually spoke to families of those who have lost loved ones to Covid, they might understand the real impact of this wretched virus.

Getting jabbed is the sensible thing to do – so every footballer who has stated they don’t want to get jabbed should delve into their conscience and do the right thing.