NEW ORLEANS (AP) — Alvin Kamara expects to be fined for wearing a pair of Christmas-themed cleats that, as it turned out, would also be worthy of a Hall of Fame display.

With a red shoe on his right foot and a green one on his left, Kamara tied an N.F.L. record set in 1929 by running for six touchdowns in a game. He finished with a career-high 155 yards rushing to help the New Orleans Saints beat the Minnesota Vikings 52-33 on Friday and clinch their fourth straight N.F.C. South title.

“It just feels good to have one of those days, just for the team,” Kamara said, showering credit on the Saints’ offensive line.

“I’m not focused on personal, like, goals and yards and stuff like that,” Kamara continued. “As long as the team has success, then personal success will come.”

That personal success has come all season for Kamara, who during training camp signed a five-year contract worth up to $75 million. He has since set franchise records for rushing touchdowns in a season with 16 and total touchdowns with 21.

A possible fine would come from wearing shoes that didn’t conform to the N.F.L.’s uniform codes.

“If they fine me, whatever it is, I’ll just match it and donate to charity,” he said. “You know, the Grinch always tries to steal Christmas.”

Kamara slipped a couple of tackle attempts and then sprinted into the clear for a 40-yard touchdown on the game’s opening drive. He added scoring runs of 1, 5, 6, 7 and 3 yards against a Minnesota defensive front hit hard by injuries, and equaled the Hall of Fame fullback Ernie Nevers’ achievement.

“It was awesome,” Saints quarterback Drew Brees said. “Six touchdowns for a running back is just astounding.” 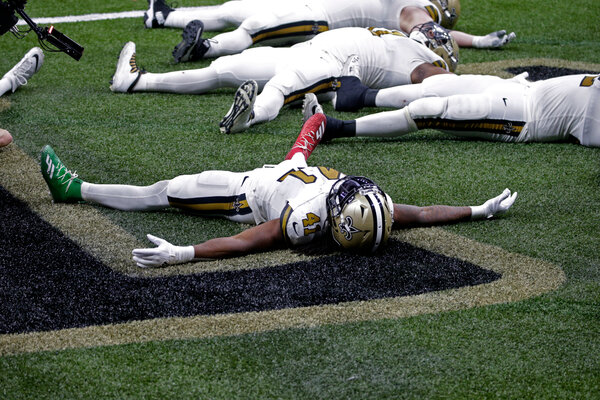 Minnesota (6-9) was eliminated from playoff contention while allowing the most points by any Vikings team since 1963, the franchise’s third N.F.L. season. The Vikings also allowed the most yards in a game at 583. The Saints (11-4) never punted.

“They just mashed us up front,” Vikings Coach Mike Zimmer said, calling his defense “the worst one I’ve ever had” as a coach. “We couldn’t slow them down. It would be 8-yard gain, 7-yard gain.”

Saints Coach Sean Payton said it felt like a Canadian Football League game, with many first-down conversions coming before New Orleans even got to third down. The Saints might have won by a greater margin if not for two interceptions of Drew Brees, one of them on a pass that deflected off receiver Emmanuel Sanders’ hands.

Brees completed 19 of 26 throws for 311 yards in his second game back from rib and lung injuries that had sidelined him for four games.

Sanders had four catches for 83 yards, while tight end Jared Cook caught three passes for 82 yards. New Orleans’ 264 yards rushing were the most by a Vikings opponent in Zimmer’s seven seasons.

New Orleans native Irv Smith Jr. caught a pair of touchdown passes in the third quarter for the Vikings, with the second pulling Minnesota to within 31-27. But the Saints responded with two short touchdown runs by Kamara and one by the versatile Taysom Hill in the fourth quarter to put the game out of reach.

Kirk Cousins passed for 283 yards and three touchdowns for the Vikings, who never led and trailed for good after Kamara’s second touchdown in the first quarter.

Saints players celebrated the last Kamara touchdown by pretending to make snow angels on the Superdome turf, which center Erik McCoy planned during the final drive as something that stuck with the Christmas theme.

Payton, who spent part of his youth in the Chicago area, was thinking about Gale Sayers’ six-touchdown game (four rushing, two receiving) against San Francisco in 1965 when he called the play that led to Kamara’s final score with just less than two minutes left.

“I’d say most of these players have no idea how good Gale Sayers was,” Payton said, adding that Kamara’s touchdown total “was a big deal. He played fantastic.”