Last August, when Caitlin Thwaites arrived for her meeting with incoming Magpies Netball coach Rob Wright and Collingwood’s leadership and culture manager Nick Maxwell after a 550-goal Super Netball season, she had no inkling that she was, in fact, on the way out. 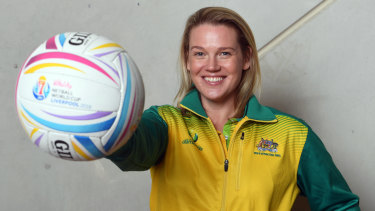 The reality of being left without a club after successive top-two finishes in the best and fairest was dramatic enough; the timing, less than 12 months before the 2019 Netball World Cup, made a distressing situation even worse.

‘‘I was conscious of that. You set your goals, and in terms of what I wanted to do internationally as well as domestically, obviously that was a really big hurdle,’’ says Thwaites, one of three Melbourne Vixens named this week in the 12-strong squad for Liverpool by Diamonds coach Lisa Alexander.

‘‘It was hard to try and figure out, ‘Well, I’m still wanting to play in that World Cup, so how do I go about that now that I’m displaced from one club and find the way to still get out there and do things at a club level but also at an international level?’

‘‘So it’s been challenging, but also it makes the rewards all the better.’’

Now 32, one of the Vixens’ prodigal daughters will be one of just three players remaining – with captain Caitlin Bassett and Paige Hadley – from the 2015 triumph in Sydney. A second World Cup appearance adds to a glittering CV that includes Commonwealth Games gold and silver from Glasgow and the Gold Coast.

Yet, as well as Thwaites has settled into a Vixens’ line-up that will on Saturday seek its fourth win in six Super Netball rounds when it meets the in-form Lightning on the Sunshine Coast, there were some anxious moments, too.

With emerging Giant Keira Austin also prominent in discussions, talk persisted that the national selectors might opt for three younger, more mobile goalers to complement Bassett under the post. Instead, Thwaites’ experience and reliability helped ensure she would add to a 47-cap tally that is the second-highest in a team with less than half the number boasted by both England and New Zealand.

‘‘I was really nervous, and I think it just goes to show how much depth we’ve got amongst our squad,’’ Thwaites says. ‘‘But I’m really excited and pumped and motivated the selectors have given me the nod, and I can go out there and play with that confidence, knowing that they’ve backed me.’’

Fellow Vixens Lizzie Watson and Jo Weston will join Thwaites in the 12 that will attempt to defend the Diamonds’ title in Liverpool. Four rounds remain before the World Cup break, and although a stressful selection process may be over, the focus on performances in such an intense Super Netball competition remains.

For the third-placed Vixens, who followed a season-opening trio of wins by pinching a late draw against the Fever and then stumbling 60-50 in a disastrous zero-pointer against the Swifts, an improved performance will be required against the team that has ended their two previous campaigns en route to the title.

‘‘Lightning are playing great and we just want to be a better team than we were last week and even the week before,’’ said Watson. ‘‘We’ve sort of dropped off a little bit from the start of the season, and to have a couple of nights away together as a team is probably going to be a good thing for us, too.’’