LONDON — The stillness spoke volumes. There were 12 minutes left to play, but the game was over. Manchester United’s players were swarming around Marcus Rashford, scorer of his team’s third goal, the one that had settled matters. West Ham’s were staring blankly at the turf, unsure of quite how things had slipped away from them.

In the Billy Bonds stand, though, nobody moved. In ordinary circumstances, more than a handful would have picked themselves up with a shake of the head and a flash of anger, and made their way to the exits. A bitterly cold evening, a long trudge away from the stadium ahead, most reasonable hope extinguished. Why put yourself through any more?

But of course, this was not an ordinary circumstance. It has been 271 days since fans were allowed to watch a Premier League game in the flesh. The 2,000 West Ham supporters inside the London Stadium were the first to attend a game since March 9: another season, another world. These were the lucky few. Their reward was to sit and endure seeing their team beaten, 3-1. 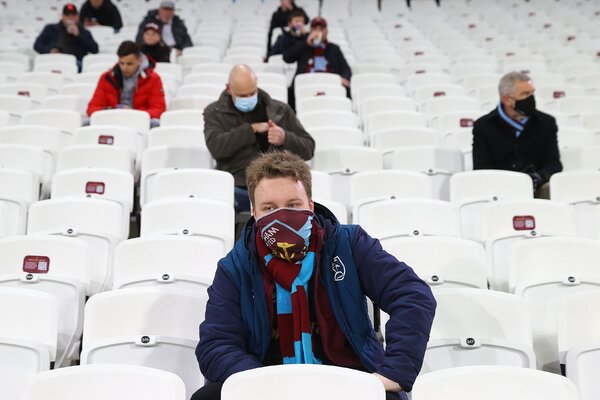 Perhaps, though, there is one exception. Soccer’s last nine months have been marked, indelibly, by absence: first, for two months, of the sport as a whole, and then, for far longer, of the sport as it ought to be, not just a game but a spectacle, a conduit for contact and community and family and all those other things that have been lost, have been sacrificed, in far more significant ways over the course of this year.

Soccer has found a way through, to its credit, playing games in empty stadiums with vast banners draped over vacant seats and artificial soundtracks piped onto television feeds. It has made it work, as it had to do. But every goal that has been scored has brought a sense of regret, too, a sense that something was missing, a sense that nothing was the same.

To witness the return of fans, though, was to realize how much deeper the absence ran. Fans are, in a sincere but intangible way, the meaning of soccer, the meaning of sports. It is fans who define and determine what all of this means. In a more immediate sense, though, they provide the texture of the occasion, that bring all of this to life in vivid Technicolor.

The roar after a goal, of course, is the clearest example, but the soundscape is far richer, far more diverse than that, and often not necessarily especially logical. The loudest cheer here on Saturday was not, for example, the one that greeted Tomas Soucek’s goal that put West Ham ahead. It was for a tackle by Declan Rice on Rashford.

Then there are all the sounds that are so much part of the tableau that they are easily forgotten — the ripple of applause after a well-executed cross-field pass; the mocking jeer that accompanies a wayward touch; the raucous applause for a throw-in — and the noises that no algorithm or soundboard could hope to capture: the flow and ebb of excitement as a player dallies on the ball and an attack breaks down; the switch from cheer to groan as the referee halts a counterattack because of a supposed injury. It is only when you hear them all again that you realize how much has been missing.

This is not the end of the journey, of course. Two thousand fans in a stadium that can hold 30 times that number can still be easily lost; the noise they generate is less a thunderclap and more a rain squall.

The Premier League has been lobbying the British government for months, insisting it has protocols in place that can safeguard far more fans than this. (It might, if it wishes to strengthen its case, point out that the vast mall that sits adjacent to the London Stadium was packed with Christmas shoppers on Saturday evening, making the most of the capital’s exit from the country’s most onerous lockdown restrictions this week.)

Those who had been allocated tickets to United’s visit in West Ham’s random lottery were greeted outside the stadium by staff members handing out free face masks — adorned with an antiracism message — and welcoming them back to the club. There were temperature checks on the way in, one-way systems in place to move around the arena, all those things that might once have been so alien but are now ruefully familiar.

The hope, of course, is that these early games will provide proof that the numbers of fans allowed inside can grow, gradually and carefully, though seeing places like this full again remains a distant prospect.

Only four of this weekend’s nine Premier League fixtures will be played in front of any fans at all; the fact that the 10th game, Newcastle’s trip to Aston Villa, was postponed after an outbreak of coronavirus among Newcastle’s players and staff members offers a warning that the road ahead is not a straight one.

That at least one game this weekend — at Millwall, not too far from this part of east London — was marred by fans’ booing the sight of players taking the knee, part of soccer’s ongoing response to the Black Lives Matter movement, is a troubling reminder that every silver lining risks attracting a cloud.

But this is, without question, a start. After 271 days, fans are finally back in Premier League stadiums. The game feels just a little more real, a little more like its old self again. It has missed them and they, in turn, have missed it. Nobody moved when Rashford scored Manchester United’s third. That is the lot of the fan: There are no guarantees that you will like what you see. But sometimes, just seeing it is enough.