Bobby Brown, the Yankee infielder who played on four World Series championship teams while pursuing a career in medicine, quit baseball at age 29 to open a cardiology practice and later served as president of the American League, died on Thursday at his home in Fort Worth. He was 96.

The death was confirmed by his daughter Kaydee Bailey.

Brown usually missed spring training because of his studies, and he was often platooned by Manager Casey Stengel, but he proved a crucial figure at the plate for the Yankees by the time October arrived. He had a .439 batting average, with 18 hits including five doubles and three triples, while appearing in the World Series every year but one from 1947 though 1951.

Brown received a medical degree from Tulane University in 1950 and left the Yankees in the summer of 1952 for medical service in the Army during the Korean War.

“My unit landed at Incheon, Korea, on Oct. 1, 1952, the first day of the World Series,” he told Baseball Digest in 2003. “It was the worst day of my life. I’m trudging up a quay for a quarter of a mile with everything I owned on my back going into Korea, and my team is playing in the World Series. My wife had our first baby when I was flying over the Pacific.”

Brown became a battalion surgeon near the front lines and later served at an Army hospital in Tokyo.

He was discharged in April 1954, and he played occasionally for the Yankees that spring. He retired in July after eight seasons with a career batting average of .279.

Brown completed his cardiology training in 1958 and opened a practice in Fort Worth. Except for a few months’ break in 1974, when he was the interim president of the Texas Rangers, he remained in medical practice until 1984, when he became the American League president — a post that mainly involved disciplining players for their run-ins with the umpires he supervised. 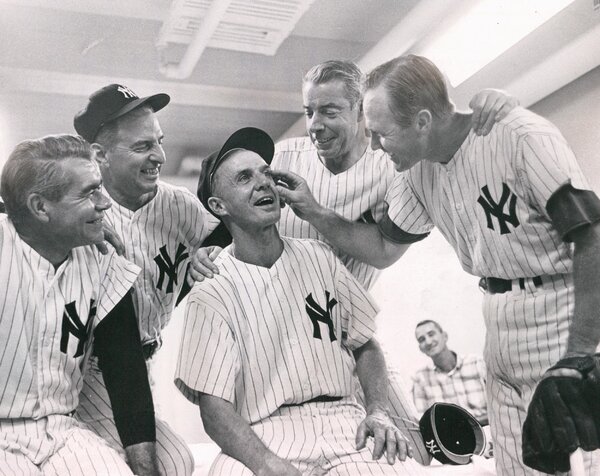 Robert William Brown was born on Oct. 25, 1924, in Seattle, a son of William and Myrtle (Berg) Brown. His father, who had played semipro baseball, encouraged Bobby to play ball. He moved with his family to the San Francisco area as a teenager and played sandlot baseball there with Jerry Coleman and Charlie Silvera, who would become his teammates on the Yankees.

Brown entered the Navy in 1943 and played for Stanford, U.C.L.A. and Tulane while beginning his medical education in a World War II officer training program.

He signed with the Yankee organization in 1946 for a bonus estimated at $50,000 or more. He played shortstop for the Yankees’ Newark Bears farm team that year, hitting .341, and made his major league debut near the season’s end.

The big money and his blond hair brought him the nickname Golden Boy.

But Brown dispelled any doubts his teammates might have had. A left-handed line-drive hitter, he batted .300 in both 1947 and ’48, mostly pinch-hitting and filling in for some games behind Billy Johnson, the third baseman, and Phil Rizzuto, the shortstop, both right-handed batters.

But a career in medicine beckoned. The path was a long one; he didn’t complete his cardiology training until he had been out of a Yankees uniform for four years.

In a 1983 interview with George Vecsey of The New York Times, Brown spoke about the challenges he faced as a physician and his decision to rejoin the baseball world full time in the American League post.

“When you’re on duty, you’re really on,” he said. “The calls can come at any hour. Making plans is an exercise in frustration. I’m 59 years old. I’ve been doing this 26 years and didn’t see myself doing it more than a few more years. You get tired.”

He continued: “I didn’t see myself doing administrative work, running a rehabilitation center or something like that. I knew I was too young to stop working, but one of the problems with being a doctor is that you’re really not trained to do anything else.”

“I really wasn’t ready to give up my practice,” he said, “but the league presidency was a once-in-a-lifetime opportunity.”

In June 1988, Brown imposed a three-game suspension and a $1,000 fine on Billy Martin, the Yankees manager and his former teammate, for throwing dirt at an umpire who had ejected him after an argument over a call.

He stepped down as league president in 1994.

In his later years, Brown returned to Yankee Stadium on Old-Timers’ Day and eventually become one of the event’s more senior Yankees, along with Yogi Berra, who had been his roommate on road trips. That pairing produced the oft-told (and possibly true) story that while Brown was going through his medical volumes one night, Berra told him to let him know how his book turned out.

In addition to his daughter Ms. Bailey, Mr. Brown is survived by another daughter, Beverley Dale; a son, Pete, a physician; 10 grandchildren; and 14 great-grandchildren. His wife, Sara (French) Brown, whom he married in 1951, died in 2012.

In his book “Summer of ’49” (1989), David Halberstam wrote of the news conference announcing Brown’s signing: “Larry MacPhail, one of the Yankee owners, had spoken so extravagantly about his talents — what a fine young man he was and what a brilliant young doctor he was going to become — that Will Wedge of The Sun finally asked, ‘Larry, are you signing him as a player or a doctor?’”

Brown talked about his dual quests to excel at major league baseball and medicine in an interview with The Sporting News in June 1949.

“Just as long as baseball wants me, I will want baseball,” he said. “Inevitably, there will be a day when I will have to say to myself, ‘The time has come. Hang up your spikes and your uniform, put away the bats, and get down to working out the oath of Hippocrates.’”

When he was about to become the American League president, Brown was asked by The Times if he ever wondered what kind of a player he would have been if he had pursued baseball full time.