NO wonder Eddie Howe feels like this relegation battle is “consuming” him.

Because his Bournemouth side look sure to be swallowed up after greedy Newcastle had them for dinner. 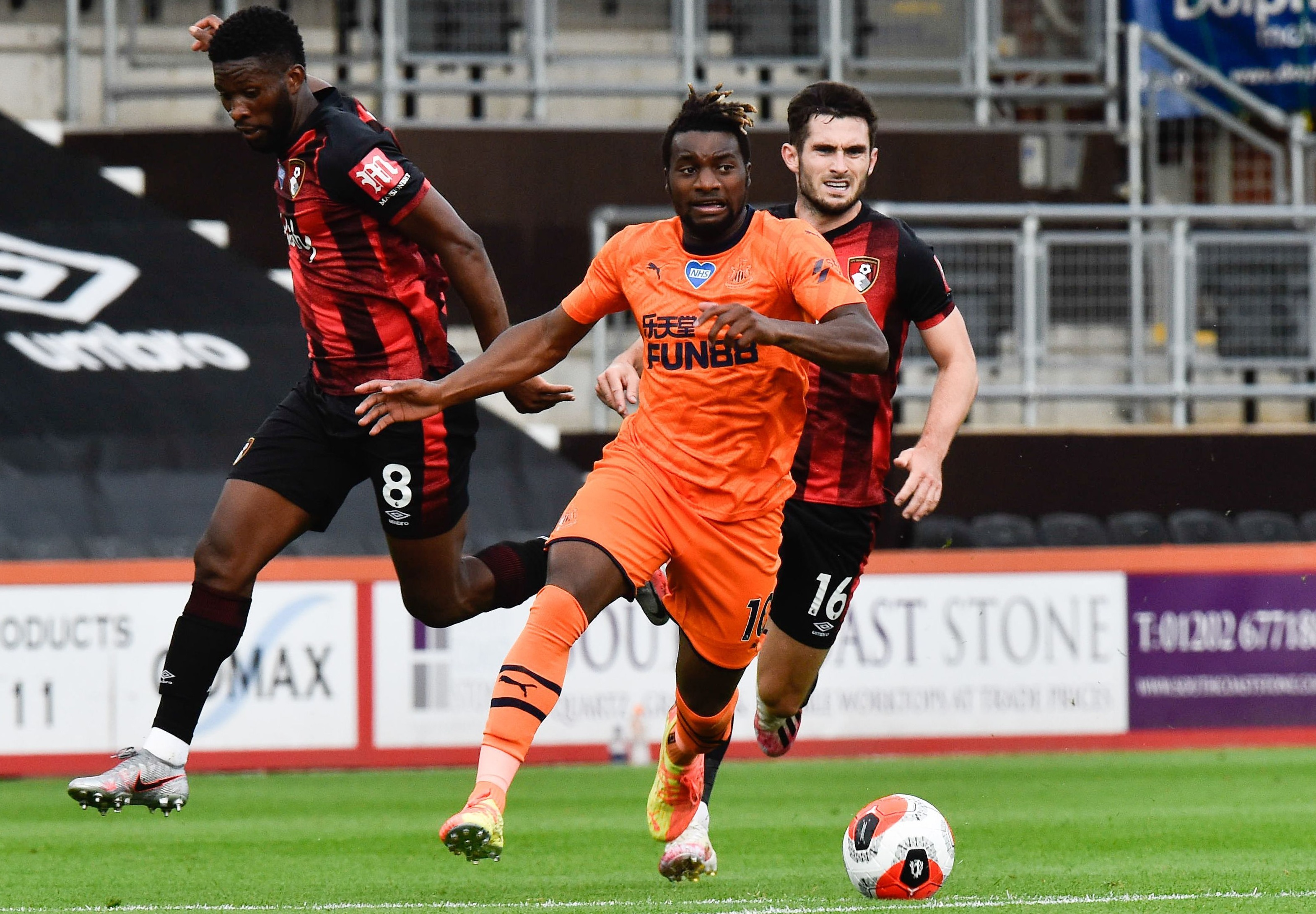 Ex-Toon man Dan Gosling hit an injury-time consolation but in truth the Cherries had no answer as they recorded their SIXTEENTH defeat in their last 20 league games.

It was a horrorshow from start to finish and, such was the scoreline, they dropped below Aston Villa on goal difference.

Confidence looks completely shot. Whether having fans would help or hinder right now is hard to say with performances as bad as this.

Even with the other teams in the dropzone scrap hopelessly floundering, it would take a brave person to bet on Bournemouth beating the drop.

Because up next comes – and Cherries fans may want to look away now – Manchester United, Spurs, Leicester and Manchester City.

This was their chance and they blew it spectacularly.

They were no match whatsoever for well-drilled Newcastle.

Steve Bruce has his detractors but his side are starting to look half decent now Almiron and particularly Allan Saint-Maximin, who grabbed three assists, have found their feet.

This win puts them up to 42 points and with a fair shout at the top ten.

As first impressions go for prospective new employers, if the Toon’s takeover ever does go through, it ain’t bad.

But the story of the match was sadly more about Bournemouth’s demise, which began almost instantly.

It is not as if Bournemouth had not been warned.

Howe spoke of the need to cut out the slow starts after being caught cold by Crystal Palace’s quickfire, first-half double in their opening game of the restart. 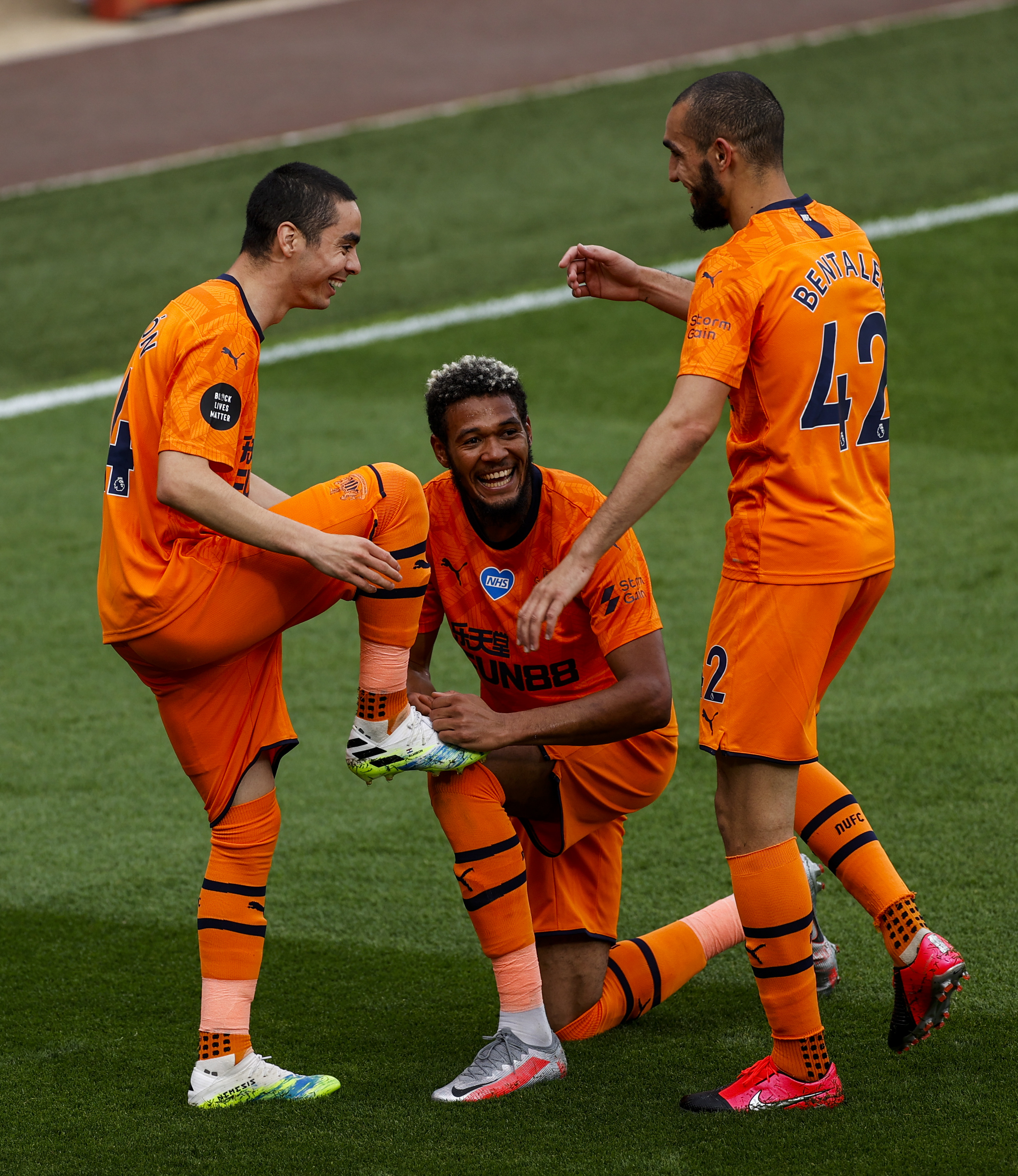 But it was almost a repeat scenario here as his side fell behind inside five minutes, and then 2-0 down on the half hour.

The first came when sloppy Jefferson Lerma was caught in possession by Longstaff, who scrambled the back to Saint-Maximin.

That took the pint-sized striker’s haul to two Premier League goals in a week, after a wait of more than two years.

What was left of Bournemouth’s fragile confidence shattered completely with that early blow.

With no fans in the stadium, the noise both on the touchline and out on the pitch during these games is more discernible than ever.

The booming voices of Martin Dubravka, Jamaal Lascelles and Steve Bruce were audible throughout.

Even Saint-Maximin piped up at one point to demand Dubravka “keep playing” after the Slovak keeper had punted the ball long when a short pass was available.

But the sounds coming from the home side faded with every passing minute.

Fewer and fewer home players looked like they wanted the ball as hope evaporated when Longstaff blasted the visitors two ahead.

Saint-Maximin was allowed the freedom of the left-hand side of the box and gladly capitalised, racing round Adam Smith and cutting back for Longstaff who belted home.

It was the SIXTH time this season Bournemouth have shipped two goals or more in the first half.

And with their problems at the other end of the pitch, there was no coming back from this.

The Cherries had not scored since the resumption and with Callum Wilson suspended, Howe was forced to call on a front four out of form and fitness.

David Brooks and Arnaut Danjuma have been injury victims throughout the season, while Josh King was a surprise starter given his ankle problem sustained against Palace.

But Dominic Solanke could not blame another luckless outing in front of goal on the treatment table.

He has now played 37 league games for Bournemouth and still not scored.

The 22-year-old was unlucky just after the break as his deflected hit the post, before an offside King turned in the rebound.

But with numbers like that, the business to sign Solanke for £19million from Liverpool in January 2019 is looking like one of the worst in Premier League history.

Howe will defend his player to the end but the fact is hanging his hat on such a shotshy striker could cost his side big time.

Things may have been different if Brooks had been fit this season. The Welshman struck the crossbar on the hour with a long-range effort.

Newcastle then stepped it up as subs Almiron and Lazaro struck brilliantly, before sub Gosling looked almost embarrassed to scramble in at the death.

Howe claims his sleep has been good throughout all of this, despite the "hurt" of his team's collapse.

Surely he will not have wanted to drift off last night for fear of reliving this nightmare of a display.