Boxing fans have reacted to the news that the British Boxing Board of Control have prohibited the much-anticipated Conor Benn-Chris Eubank Jr. bout from taking place on Saturday night.

Sportsmail revealed on Wednesday that Benn, 26, had tested positive Clomifene, a banned substance typically found in fertility treatment for women that also contains performance enhancing properties, increasing the production of testosterone in men.

Despite a statement being released shortly after by Wasserman Boxing and Benn’s promotional team, Matchroom, fronted by Eddie Hearn, claiming the fight was still due to go ahead as planned, the BBBofC have stepped in to halt proceedings. 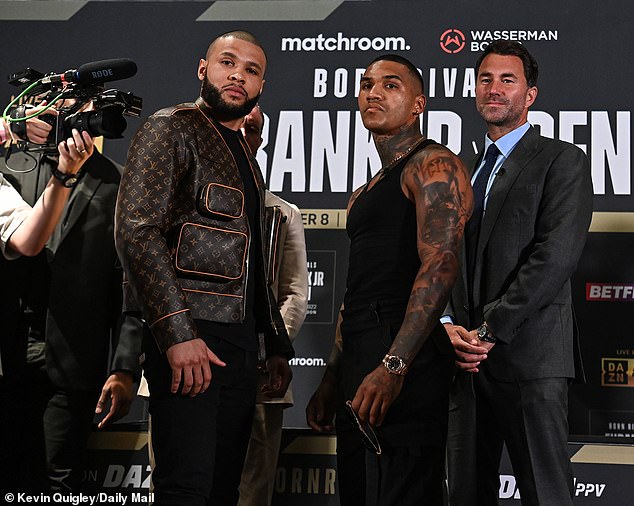 ‘On the evening of 4th October 2022, the Board of the British Boxing Board of Control Limited resolved that the contest between Chris Eubank Jnr. and Conor Benn scheduled to take place on 8th October 2022 is prohibited as it is not in the interests of Boxing,’ the board’s statement read.

‘That was communicated to the Boxers and Promoters involved on the morning of 5th October 2022.’

The failed drugs test and subsequent intervention by the board calls to a halt one of most hotly anticipated all-British bouts in recent memory with the two sons of former foes Nigel Benn and Chris Eubank Sr. going to battle in a catchweight fight that promised to be as engrossing as their fathers’ fights 30 years ago. 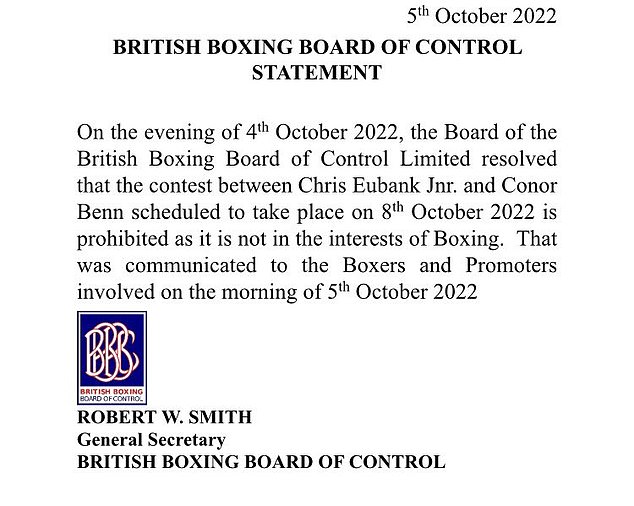 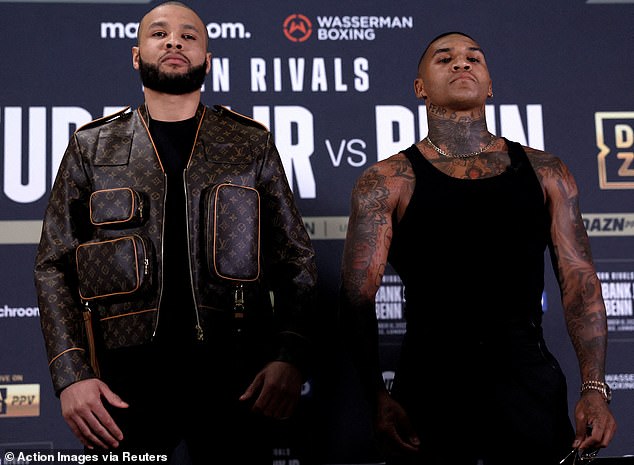 Reacting to the news on social media, fans expressed their disappointment at the fight not taking place but many accepted it was the correct decision.

‘I am gutted about the Eubank Jr-Benn news, but it’s the correct decision. As a Benn fan, really disappointed in him,’ one social media user noted.

Another wrote: ‘Gutted, have been looking forward to this British scrap, best one for a long while.’

One supporter expressed their anger at the situation, questioning the Matchroom fighter for his decisions.

One other supporter, perhaps also pointing to the breakdown in talks between Tyson Fury and Anthony Joshua over their planned December 3 meeting, said that while it was disappointing and only added to the long list of British fights fans were being denied, said it was the right call. 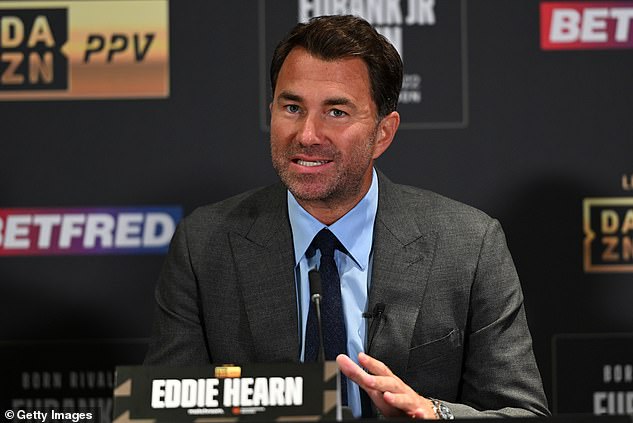 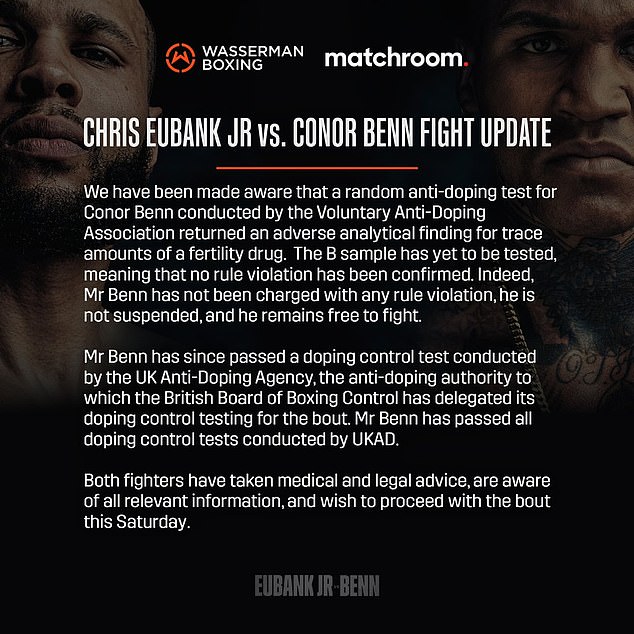 ‘As disappointing as the whole thing is this is the correct decision for the sport. No fighter should be allowed to fight after cheating but we are getting robbed of some massive UK fights this year,’ they wrote.

Generally, the consensus online was one of anger and frustration – many pointed to this being a wider boxing problem, a sport that is always seeming to beat itself – but that no other decision could have been made.

‘Rightfully so even though it’s disappointing,’ a social media user wrote in support of the BBBofC. 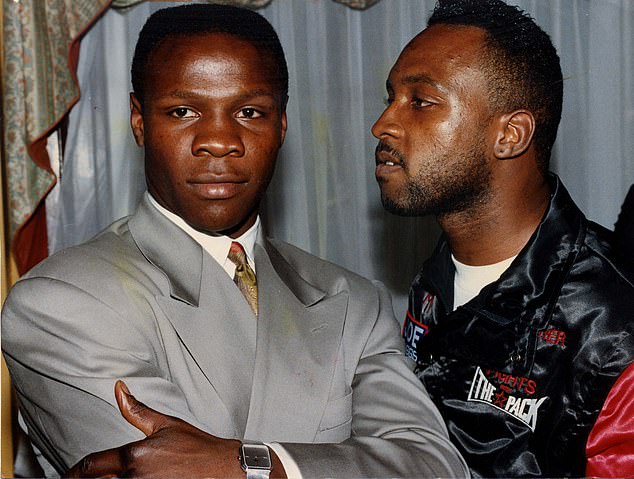 Saturday’s fight was due to fall almost 30 years after the second of two iconic fights between their fathers, Nigel Benn and Chris Eubank (pictured)

Sympathy on the ground for Benn and his promoter Hearn appeared thin.

‘Benn just lost both of them several million,’ one individual wrote.

Another demanded an apology from Benn. ‘This is so upsetting not only to the fans like us who want to watch the fight, but everyone involved should have a public apology immediately, the way Conor Benn went on in his interviews was just shocking! Now look a failed drug test!’ they wrote.

Clomifene is a powerful female fertility medicine which doubles as a performance enhancer.

It stimulates egg production in women, giving those struggling to conceive the best chance of getting pregnant.

Yet, studies suggest that when given to men as a daily pill, clomiphene triggers the production of testosterone.

Testosterone has a key role in tissue healing, carrying oxygen and nutrients to the injury site, aiding repair. However, it also makes it easier to put on muscle and offers a physical boost, hence why it is a banned substance in the world of athletics.

Carl Frampton, a former two-weight world champion, had broken rank earlier in the day to express dismay at the news that the fight was still due to go ahead despite Benn’s failed drugs test. The Board stepped in shortly after to release a statement.

‘Boxing does itself no favours. There should be no grey areas. If you fail a test you’re banned and in my opinion you should be banned for life,’ the Northern Irishman wrote.

‘I’ve been super cautious from my amateur days of what I can and can’t take. I’d wouldn’t take a multi vitamin unless VADA approved. I refused a topical psoriasis ointment as it had steroids in it. Deterrents need to be stronger,’ he revealed.

Meanwhile, amid heightened confusion owing to Hearn’s comments on Wednesday afternoon that was now a ‘back-and-forth’ dialogue between the Board and lawyers, others expressed confusion at the situation.

Hearn told Matchroom: ‘There’s currently no reason in terms of violation or suspension that the fight should not take place. You’re not going to suspend Conor Benn, so at some point the fight is going to take place.’

One supporter labelled the sport a ‘mess’.

‘How does this fight go ahead? We need an absolutely clear explanation from Conor Benn himself as to how this substance showed up in a test? Without something incredibly plausible, the whole fight is a charade and a dangerous one at that,’ an individual questioned.

‘What the hell is going on?’ DAZN presenter Ade Oladipo asked.

Naturally, other fighters took their opportunity to offer themselves up as a late notice replacement for Benn.

Caoimhín Agyarko, a 12-0 fighter represented by Hearn’s promotional company, said: ‘Don’t cancel the show send me a contract I’ll step in and fight Eubank not a problem.’