Cleveland Browns star Myles Garrett has not received a ton of support for ripping off Pittsburgh Steelers quarterback Mason Rudolph’s helmet and hitting him with it, but one teammate believes the person who took one on the head bears some responsibility.

As Garrett reportedly gets set to have an appeal on his indefinite suspension stemming from Thursday's incident, Browns defensive tackle Sheldon Richardson suggested Monday that Rudolph had it coming to him.

Video of the brawl showed Garrett taking Rudolph down and the quarterback grasping at Garrett's helmet. The fight escalated from there, with Garrett removing Rudolph's helmet and hitting him with it.

"It's on camera what he's doing," Richardson said. "There's no hiding it no matter what he says in the media."

Rudolph is reportedly set to receive a fine for fighting but nothing more. In Richardson’s view, he said that’s not nearly enough and that Garrett was simply defending himself.

"Of course he was," Richardson said. "If a guy scratching at your face, what you going to? The helmet was overboard, let's get that clear. But defending yourself, I don't blame him for defending himself at all."

NFL'S MYLES GARRETT SUSPENDED IN BROWNS BRAWL: HOW MUCH MONEY IS ON THE LINE?

Richardson said Rudolph was escalating the fight by initially trying to pull Garrett's helmet off. 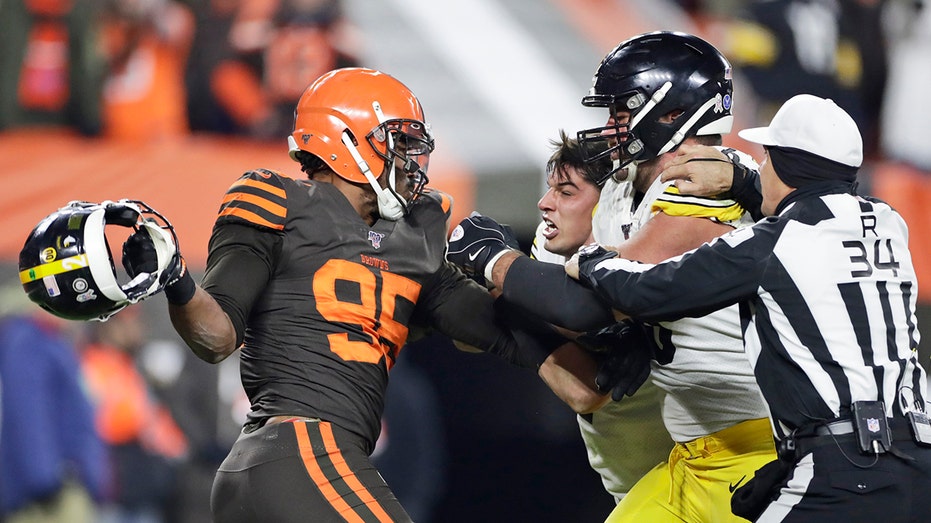 Cleveland Browns defensive end Myles Garrett, left, gets ready to hit Pittsburgh Steelers quarterback Mason Rudolph, second from left, with a helmet during the second half of an NFL football game Thursday, Nov. 14, 2019, in Cleveland. The Browns won

"You can't antagonize a fight and then claim bullying, you get what's coming to you," he said. "Of course Myles overreacted. … He was protecting himself. I don't blame him. Guy keeps rushing me, even with the helmet off, he's asking for it. Just leave it at that."

Richardson added: "If you're going to suspend Myles indefinitely, I don't know, a game or two. A game? Make it sound like you just can't be a quarterback and do as you please in this league. Have some type of consequences for your actions as well. I don't blame Pouncey for protecting his quarterback. I'd go overboard for my guys, too. So nobody's knocking him for that. That's what football is."

The only other suspensions given in the brawl were to Steelers center Maurkice Pouncey for kicking and punching Garrett in the helmet and Browns defensive lineman Larry Ogunjobi who knocked Rudolph to the ground on the side of the escalated brawl.