Madrid Municipal Police said the 33-year-old man was detained last night after the incident at Puerta del Sol square in the city centre. 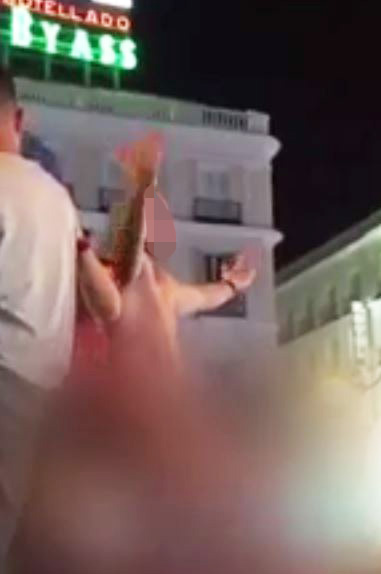 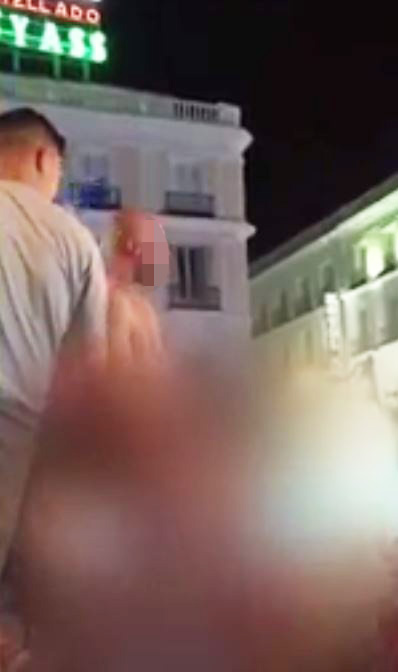 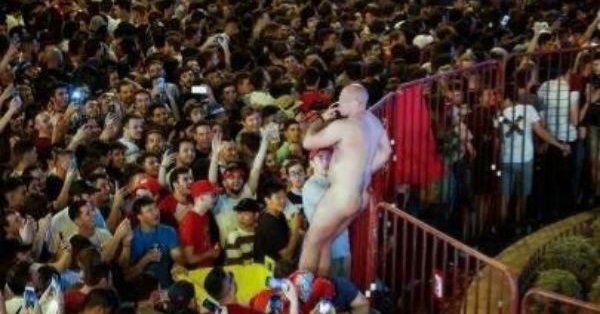 Hundreds of fans of Liverpool and Tottenham Hotspurs – the English clubs contesting the showpiece final – were milling around a stage where a band was playing on Friday night.

The man climbed on to fencing next to the stage, and first of all took all his clothes off to loud cheers.

A witness said: "Then plastic cups were thrown at him and things turned very nasty.

"The man exposed himself, and then began to pleasure himself like he was a gorilla.

"An Italian woman objected to what the fan was doing, and tried to remonstrate.

"She then accused the man of putting his hand up her skirt, and when she complained further he hit her round the head.

"She was badly hurt and needed attention from ambulance workers."

The man exposed himself, and then began to pleasure himself like he was a gorilla

She was said to have been taken to hospital with a head injury and has been undergoing scans.

During the arrest he also allegedly assaulted three policemen who were trying to handcuff him.

Six other English fans were detained following numerous skirmishes with footage emerging of Spurs fans being "battered" by cops.

Several thousand extra police — including delegations from Merseyside and London — were brought in to cope with the additional supporters in Madrid ahead of the final.

Officers also took measures to close down some outdoor drinking areas shortly after lunch yesterday in an effort to restrict noise around some of the residential areas.

At the beginning of the match tonight, security officials began ejecting fans attempting to get into the Champions League final with fake tickets.

There were ugly scenes as one young English woman tried to run back towards the metro station after being told to stop by police.

One official gave chase and detained the struggling woman before escorting her back to security, flanked by mounted cops.

The woman, along with another young woman and an older man had their tickets scrutinised by security before being ejected from the stadium perimeter.

One officer told them as they left: "If police say 'stop', stop."

Asked what happened, the woman said: "You don't wanna know."

She later added that she and her friend both tried to gain entry with fake tickets.

She said the other ticket, for the older man, was genuine.

Tens of thousands of fans have travelled to Madrid.

The number of fans in the city far outnumbers the 16,000 tickets made available for the final.

Liverpool went on to win the final 2-0 with goals from Mo Salah and Divock Origi.