CRISTIANO RONALDO has been told how "handsome" he would look in the kit of a Mexican third tier side.

Coyotes Tlaxcala made the flirty transfer approach to the Juventus star on Twitter amid rumours over his future. 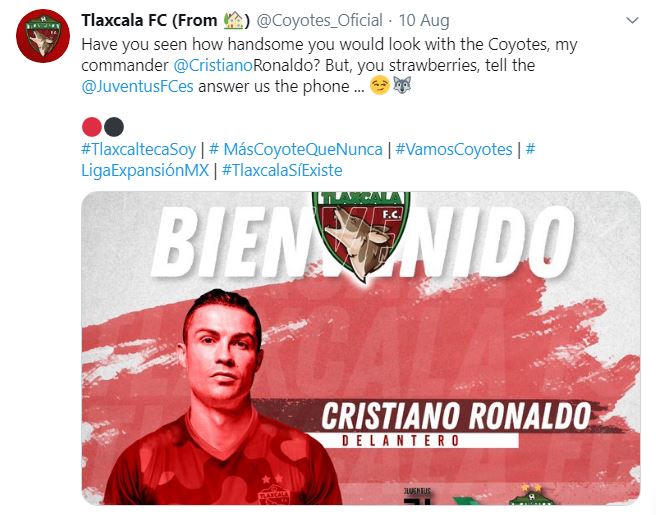 The team based in the state of Tlaxcala – just east of Mexico City – mocked up a picture of Ronaldo in their red camo style kit acompanied by a witty caption.

They wrote: "Did you see how handsome you would look with the Coyotes, my commander @Cristiano Ronaldo?

"But, you strawberries, tell Juventus to answer the phone to us."

The 35-year-old megastar was being linked with a move to Paris Saint-Germain over the weekend.

It emerged last week he reportedly "wanted to quit Juve" to play with Kylian Mbappe and Neymar at PSG.

But after Maurizio Sarri was sacked by Juve and replaced with Andrea Pirlo it appears the Portuguese icon is going nowhere just yet.

PSG are also said to have snubbed the dream transfer to focus on new deals for Mbappe and Neymar.

And Pirlo reportedly wants to get the best out of Ronnie by reuniting him with former Real Madrid star Isco.

Ronaldo recently made headlines for taking a swipe at Juan Cuadrado in training after the ex-Chelsea man mocked his trademark "Siuu" celebration.

And his handsome hunk image came to the fore again yesterday when he posted a picture of his impressive physique while on holiday in Portofino.