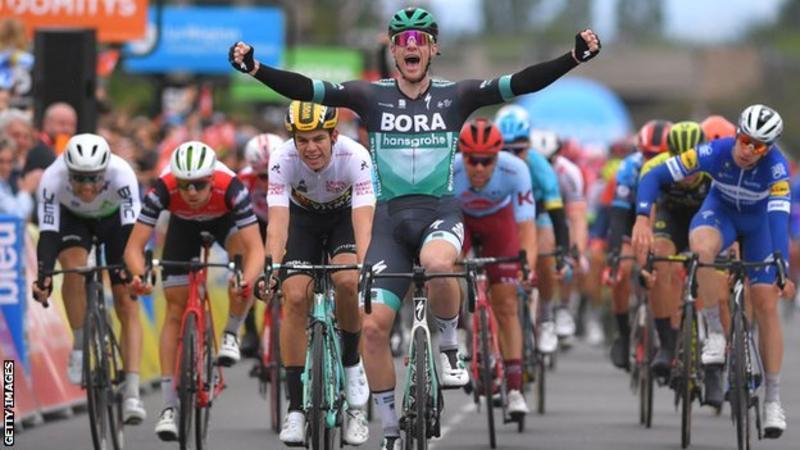 The Bora-Hansgrohe 28-year-old was an easy winner from Belgian Wout van Aert and Italian Davide Ballerini on the flat 177km stage to Riom.

Three-time champion Chris Froome, competing in preparation for the Tour de France, finished among the peloton.

Froome, 34, will be chasing a record-equalling fifth victory when the Tour de France begins in Brussels on 6 July.

After establishing a three minute 55 second advantage, a two-man breakaway of Eritrean Natnael Berhane, 28, and France’s Quentin Pacher, 27, were caught by the peloton with 12km to go to set up a finishing sprint.

And the Belgian believes he can retain the leader’s jersey after Wednesday’s 26.1km individual time-trial in Roanne.

“It wasn’t easy to recover from yesterday’s efforts during today’s stage because of the bad weather,” said Teuns.

“It’s a big day tomorrow, also for me to try and keep the jersey. I’m in a really good shape so I have to believe in myself. I’ve prepared very well for the Dauphine and what’s coming after.”