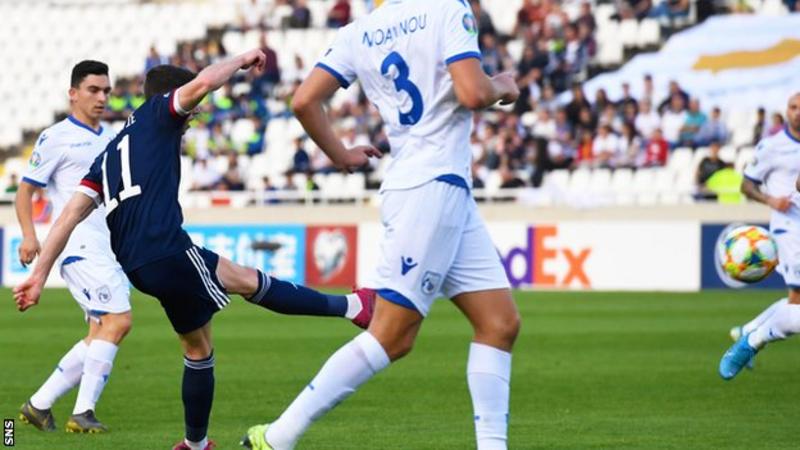 John McGinn’s fourth goal in two Scotland games secured a morale-boosting victory in Cyprus and moved Steve Clarke’s side above their hosts into third in Euro qualifying Group I.

But it came after an early let-off when Georgios Efrem’s shot hit the crossbar and appeared to land over the goalline.

While Scotland can no longer qualify for Euro 2020 through the group, the head coach set the target of a third-place finish before their play-off in March.

To meet his target, victory in Cyprus was a must, but was far from a formality.

Scotland had to survive several nervous moments – Ioannis Costi should have made it 2-2 when he crashed a driving header wide – but they held on for a dogged three points.

Not scintillating but so important

Things might have turned out very differently had Cyprus been rewarded for some early enterprise with a goal they felt they had earned.

With yet another all-new Scots backline trying to find their feet, Cyprus weaved patterns around them – Fotis Papoulis and Pieros Sotiriou playing lovely give-and-gos to release Efrem, who bamboozled Scott McKenna before unleashing a shot that appeared to cross the line after striking the underside of the crossbar.

But the officials were unconvinced and waved play on as the Cypriots claimed in vain and David Marshall in the Scots’ goal breathed a sigh of relief.

And within minutes Scotland had scored a wonderful goal of their own. Ryan Jack and McGinn combined in midfield to find Christie, who weaved his way in off the right wing to curl a perfectly-judged effort into Urko Pardo’s top right-hand corner.

That was an early nerve-settler for the visitors, who were trying to pin Cyprus back by pressing them quickly in high areas, with captain Steven Naismith making a customary nuisance of himself among the home defenders.

But it was clear Cyprus felt capable of hurting Scotland at the other end. They kept faith with their quick passing game and Marshall had to push away a shot from Sotiriou to maintain the slender advantage.

And Efrem finally got his goal with another sublime hit from the angle of the penalty area. Debutant Declan Gallagher half-cleared a free-kick but, as the ball fell out of the Nicosia sky, the former Rangers forward’s technique to volley past Marshall was perfect.

It was difficult to argue with the scoreline. Cyprus had put plenty into the match but they quickly found themselves trailing again as Greg Taylor sent in an inviting low cross from the left and McGinn swept the ball into net from close range for a fourth goal in two games and a fifth in five.

Still Cyprus refused to concede defeat and just failed to level a second time by a matter of inches when Costi threw himself at Jason Demetriou’s cross only to see his header fly the wrong side of a post.

This was by no means a scintillating Scottish performance but it was measured, disciplined and ultimately successful.

The ability to grind out victories is an important one to recapture, and avoiding defeat at home to Kazakhstan on Tuesday will give Clarke the third-place finish he targeted and ensure Scotland go into the Euro 2020 play-off semi-final in March in good heart.

Man of the match – Ryan Christie

Even from a wide position, where he was less able to orchestrate proceedings, the Celtic man looked the most likely Scotland player to make something happen.

His goal looked effortless and was executed with the composure of a man on top form who knows exactly what he wants to do.

Now a key man for club and country, his fitness levels allow him to continue to press, chase and harry opposition defenders until the final minute.

Attempt missed. Grigoris Kastanos (Cyprus) left footed shot from outside the box is just a bit too high from a direct free kick.

Pieros Sotiriou (Cyprus) wins a free kick in the attacking half.

Attempt missed. Fotios Papoulis (Cyprus) right footed shot from the centre of the box is too high. Assisted by Pieros Sotiriou.

Attempt missed. Ioannis Kosti (Cyprus) left footed shot from outside the box is high and wide to the left.

Oliver McBurnie (Scotland) wins a free kick in the defensive half.

Giorgios Merkis (Cyprus) wins a free kick in the defensive half.

Attempt missed. Demetris Theodorou (Cyprus) right footed shot from a difficult angle on the right is close, but misses to the right. Assisted by Nikolas Ioannou with a cross.

Urko Pardo (Cyprus) wins a free kick in the defensive half.

Attempt saved. Matija Spoljaric (Cyprus) right footed shot from outside the box is saved in the bottom right corner. Assisted by Ioannis Kosti.

John McGinn (Scotland) wins a free kick in the defensive half.

John McGinn (Scotland) wins a free kick in the defensive half.

Attempt missed. Ioannis Kosti (Cyprus) header from the centre of the box is close, but misses to the left. Assisted by Jason Demetriou with a cross.

John McGinn (Scotland) is shown the yellow card for a bad foul.