Danny Ainge retired as the president of basketball operations for the Boston Celtics on Wednesday and was replaced by the team’s coach, Brad Stevens, whom Ainge hired in 2013 out of the college ranks. It was a stunning change at the top of the franchise that Ainge ran for nearly two decades. Stevens has no front office experience, though as the head coach he gave input on roster moves.

The announcement came a day after the Nets beat the Celtics in Game 5 of their first-round series to eliminate them from the playoffs, capping a disappointing season. Ainge, flanked at a news conference by two Celtics owners and Stevens, said that the decision to step down was entirely his and that he began thinking about doing so two years ago, when he had a heart attack during the 2019 playoffs.

“I trust my instincts,” Ainge said. “My instincts told me a couple months ago that it was time for me to move on. That’s what is best for us. That’s what’s best for the Celtics.”

Wyc Grousbeck, the majority owner of the Celtics, said: “For the record, Danny came and said it’s his time. It’s completely his decision with no support whatsoever from ownership in making that decision. No support was offered except for wishing him the best once it became clear that was his decision.”

Ainge, 62, and Stevens, 44, said they had casually discussed the possibility of Stevens inheriting Ainge’s job in the past. Grousbeck called elevating Stevens to the front office a “natural promotion from within.”

“He was at the table here with Danny in the war room and all of our roster decisions along the way for the eight years, which has had a number of notable successes,” Grousbeck said.

Ainge’s hiring was one of the first moves Grousbeck and Stephen Pagliuca made after purchasing the Celtics in 2003. The Celtics had made the 2002 Eastern Conference finals, led by Antoine Walker and Paul Pierce, but had not won a championship since 1986, when Ainge played in Boston’s backcourt. Rather than building on that success, Ainge blew up the team, including a trade of Walker.

In 2007, he pulled off two trades that revitalized the franchise, for Ray Allen and for Kevin Garnett. The moves were considered risky, but almost overnight, Boston became a championship contender. The Celtics defeated the Los Angeles Lakers in the 2008 N.B.A. finals for the franchise’s first championship in 22 years.

Since then, Ainge has kept the team competitive, in part through shrewd moves like trading Pierce and Garnett to the Nets for the draft picks that became Jayson Tatum and Jaylen Brown. But some of his moves backfired. In 2017, he traded one of those Nets picks and guard Isaiah Thomas for Kyrie Irving, then a disgruntled star with the Cleveland Cavaliers. After the 2018-19 season, Irving spurned the Celtics and signed with the Nets in free agency. 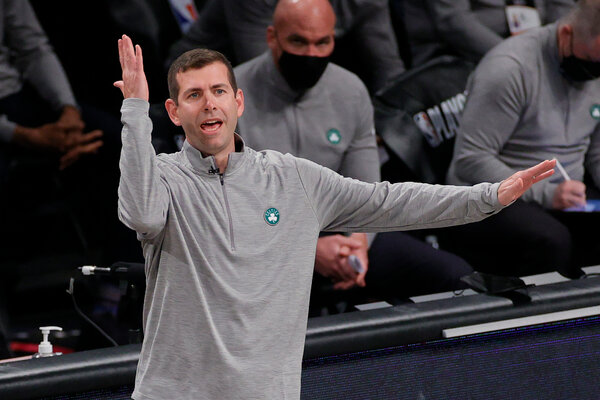 Even before Ainge was hired by the Celtics, he was revered by fans for his play on two Boston championship teams. He is the only figure in Celtics history to win rings both as a player and an executive.

On Wednesday, Ainge did not rule out working in basketball again. He said his immediate goal was to assist Stevens with the transition. “I’ll think about the future somewhere in the future,” Ainge said.

Among the first decisions Stevens has to make is who will succeed him as coach. He was an unexpected hire when he replaced Doc Rivers in 2013. Stevens had spent six years as the men’s basketball coach at Butler, where he orchestrated several cinderella runs in the N.C.A.A. tournament. As an N.B.A. coach, Stevens went 354-282 over eight seasons and made the playoffs in seven times, including three trips to the Eastern Conference finals.

Much of the Wednesday afternoon news conference served as a tribute to Ainge, who had been criticized over the past week for saying in a radio interview that he had not heard about racism toward players at the Celtics’ arena in his 26 years with the team. His comment was in response to a remark from Irving, who had asked Boston fans not to be belligerent or racist when the Nets came there for Games 3 and 4 of their first-round series. A fan was arrested at Game 4 in Boston after throwing a bottle that nearly hit Irving in the head, and many athletes over the years have spoken out about racism they experienced in Boston.

“I’ve been in professional sports for 44 straight years,” Ainge said on Wednesday. “And I’ve had a lot of ups and downs and fun and sad losses. Today is not a great day. I wish we would’ve finished the year on a much better note but I feel like there’s so much hope in the Celtics going forward.”