Sprinting, sliding and stretching, anticipating each other’s moves for four sets and more than four hours, Novak Djokovic and Rafael Nadal produced a masterpiece in the French Open semifinals.

Djokovic, as it happens, is one of only two men in tennis history who knows what it takes to beat Nadal at Roland Garros. And now Djokovic has done it twice — this time ending Nadal’s bid for a 14th championship there and record-breaking 21st Grand Slam title overall by coming back to win their 58th career matchup 3-6, 6-3, 7-6 (4), 6-2 on Friday night.

“Just one of these nights and matches that you will remember forever,” said the top-seeded Djokovic, who trailed 2-0 in the closing set before reeling off the last half-dozen games to reach his sixth final at the clay-court major tournament. 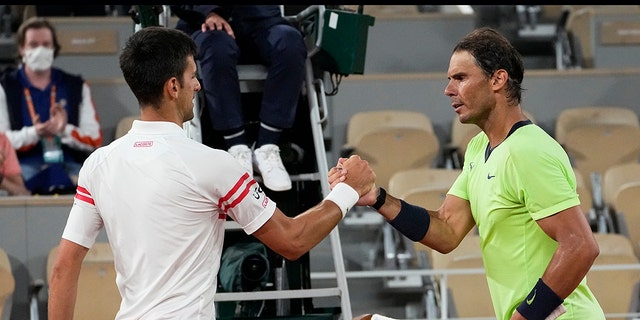 Nadal’s first defeat at the French Open came against Robin Soderling in 2009; the next against Djokovic in 2015.

“Each time you step on the court with him,” Djokovic said, “you know that you have to kind of climb Mt. Everest to win against this guy here.”

And to think: There wasn’t even a trophy at stake in this one. That will happen Sunday, when Djokovic, a 34-year-old from Serbia, faces Stefanos Tsitsipas, a 22-year-old from Greece.

The fifth-seeded Tsitsipas edged sixth-seeded Alexander Zverev 6-3, 6-3, 4-6, 4-6, 6-3 earlier Friday to reach his first Grand Slam final. It’s Djokovic’s 29th as he seeks a second title at the French Open and 19th major championship overall to pull within one of the men’s Slam mark shared by Nadal and Roger Federer.

Tsitsipas already had given away all of a two-set lead in his semifinal Friday when he double-faulted to trail love-40 in the opening game of the fifth. But Tsitsipas steeled himself to win five consecutive points, then broke to go up 3-1.

“I’m someone who fights. I was not willing to give up yet. I think I did few things right that worked in my favor,” said Tsitsipas, who entered the day 0-3 in major semifinals.

“It was a breath of fresh air, that first game,” he said. “I felt revitalized.”

His semifinal offered a measure of drama. But in truth, Tsitsipas-Zverev was merely an opening act before the headliners.

Nadal and Djokovic really riled up the raucous crowd at Court Philippe Chatrier.

Nadal acknowledged fatigue might have been a factor during his poor play in the tiebreaker, including a double-fault and a flubbed volley.

“Mistakes can happen,” the 35-year-old from Spain said. “But if you want to win, you can’t make these mistakes.”

That set alone lasted 1 hour, 33 minutes, and an 11 p.m. nationwide curfew in place because of COVID-19 was approaching. Djokovic’s previous match had been delayed more than 20 minutes while the audience — limited to 5,000 people under coronavirus restrictions — was cleared out of the stadium, but an announcement was made Friday to let everyone know the government agreed to let them stay until the end of the match.

Earlier chants in French of “We won’t leave!” were replaced by choruses of the national anthem and cheers of thanks for President Emmanuel Macron.

The intensity was palpable from the outset of the evening, and Nadal zoomed to a 5-0 lead, reminiscent of last year’s final, which he won 6-0, 6-2, 7-5. That was only the fourth shutout set lost by Djokovic in 341 career Grand Slam matches up to that point — and the first in a major final.

There wouldn’t be another Friday, because Djokovic made two key tactical adjustments — moving much further back than usual to return serve and deciding to focus on serving toward Nadal’s backhand — and quickly made clear this would be a classic between two of the greatest ever at what they do.

They defended in ways rarely seen. Found the right mix of power and touch. Conjured up impossible-at-first-glance winners that no one else would try, let alone successfully employ. Returned as well as anyone, combining to generate 38 break points.

No two men in the professional era, which dates to 1968, have played each other more than this duo (Djokovic now leads 30-28). They know each other, and each other’s strengths and weaknesses and patterns, so well.

Back-and-forth they went — from game to game, point to point, shot to shot. Through exchanges that lasted 10 strokes, 20 strokes, more, they created marvelous points, too many to count — or recount.

Neither would give up or give in.

Djokovic shrugged off his early hole. He saved a set point while down 6-5 in the third. Nadal recovered from the dropped tiebreaker to steal a break at the beginning of the fourth.

But Djokovic broke back to 2-all and was on his way.