The Washington Nationals finally welcomed fans back to their home park on Tuesday for the first time since the 2019 World Series. But a few important people were still kept away: the nine players who tested positive for the coronavirus or were found to be in close contact with the infected teammates.

The Nationals, whose season-opening series with the Mets was postponed because of the outbreak, were scheduled to face the Atlanta Braves without all of these players, who were placed on the injured list with no official designation: catcher Alex Avila, first baseman Josh Bell, starter Patrick Corbin, catcher Yan Gomes, closer Brad Hand, infielder Josh Harrison, starter Jon Lester, infielder Jordy Mercer and outfielder Kyle Schwarber.

“I spoke to all of them again last night, and they’re hanging on,” Manager Dave Martinez said. “Obviously, they want to be here and want to be with the team; that’s a struggle for them. But overall they’re in good shape, they feel good. They can’t wait to get back. We’re going to do everything that we’re supposed to do as far as protocol-wise, and when they’re available to come back, they’ll be back.”

In the meantime, the Nationals added the veteran catcher Jonathan Lucroy and eight others, including two players with no major league experience, to hold down the roster. With Gomes and Avila both out, Lucroy started behind the plate. Lucroy, 34, made one appearance for Boston last season and was released by the Chicago White Sox late in spring training.

Ryan Zimmerman, the longtime National who opted out of last season, started at first base in Bell’s absence, Andrew Stevenson started in left field for Schwarber and a veteran utility player, Hernan Perez, started at second base for Harrison, with Starlin Castro shifting to third.

Corbin and Lester were slotted as the Nationals’ third and fourth starters, but Martinez has not named their replacements. Max Scherzer was scheduled to start the opener on Tuesday, and Martinez said Stephen Strasburg would start one of the games in Wednesday’s doubleheader.

Major League Baseball announced on Monday that follow-up tests had yielded no more positives, clearing the Nationals — depleted as they are — to resume baseball activities. 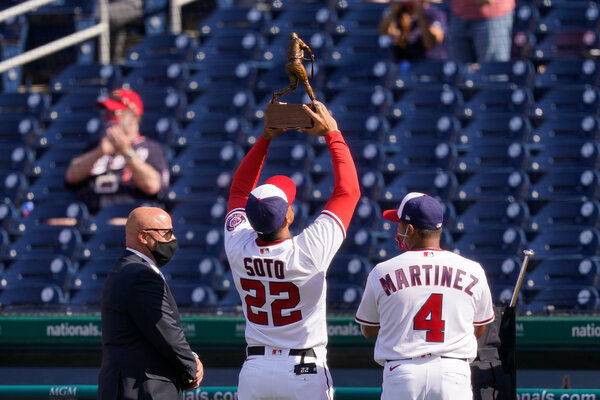 “They deemed us ready to play today, and we’re going to play today,” Martinez said. “We’re fresh out of spring training and I saw a lot of these guys play; I had tough decisions to make with some of these younger guys and now they’re going to get an opportunity to play. So I’m kind of excited about that, but when we get these guys back, we’ll be ready. For right now, I feel like we’re going to be able to compete, even with the guys we’ve got.”

Those guys include 10 active players who were part of the 2019 World Series roster when the Nationals beat Houston for the championship, the first in franchise history. While the Nationals celebrated with a parade through Washington, the absence of crowds last season prevented them from playing before their fans as reigning champions.

The team slumped to 26-34 last season, and has been cleared to host 5,000 fans for now. That amounts to only about 12 percent of the usual capacity at 41,313-seat Nationals Park, but Martinez said the team was hoping to welcome more fans as the season progresses.

As for the players, at least Scherzer said he was eager to get a vaccine.

“For me, I tend to follow science,” he told reporters on Monday. “I try to listen to what the scientists say, what the experts say. So for me, I see a benefit in it and I can’t wait to get it.”