CHARLESTON, S.C. – When Yu Liu was a little girl growing up in China, she read that Duke University was the top-ranked school in America for golf and academics.

"It was just my dream school since day one," she said.

Liu made that dream a reality, helping Duke win the 2014 NCAA Championship alongside a Frenchwoman named Celine Boutier. On Sunday at the 74th U.S. Women's Open, the two former Blue Devils will play alongside each other in the final pairing. They're knotted at 7-under 206 after three rounds at the Country Club of Charleston.

But wait, that's not all. There's also 19-year-old amateur Gina Kim, a rising sophomore at Duke who helped the program claim its seventh national title last week in Fayetteville, Ark. The delightful Kim sits five shots back at 2 under in a share of 12th.

It's no wonder Duke coach Dan Brooks is making his way Saturday night from eastern Oregon via Boise to Seattle to New York and on down to Charleston.

"This is such a special thing that's going on," said Brooks, who should arrive on Sunday sometime around 11 a.m.

MEMORIAL: Handshake with Jack is something winners never forget

The Blue Devil bonanza will be quite the storyline in Sunday's final round, but there are a number of heavy-hitters hot on the trail, most notably Lexi Thompson, who sits one back at 6 under after carding a 3-under 68. Jessica Korda is three back while Minjee Lee and So Yeon Ryu trail by four.

Ryu and Thompson are the only players in the top 10 who have won a major, but the likes of Lee and Korda are certainly due.

Thompson hadn't made a single birdie on the par 5s in the first two rounds but played them in 4 under on Saturday. The top-ranked American said focusing on the changes she has made to her physical game in the recent days will be her main focus. Earlier in the week brother Curtis convinced her to try the claw grip.

"Doing my routine, picking my small targets, and just not letting anything else get in my mind," said Thompson. "I think that's what I've been doing great these last three days, and I think will be key tomorrow because you just have to focus on what you can control and nothing else." 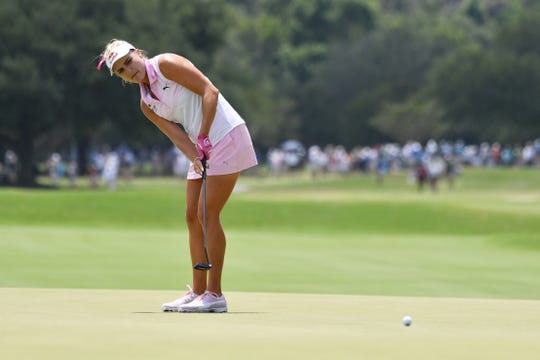 Lexi Thompson, putting on the 4th green, is tied for third after the third round. (Photo: Jasen Vinlove, USA TODAY Sports)

Brooks said Kim's word the past few months has been "chill." That's the goal. She had the physical skills, but learning to trust in the training and believing in herself has been instrumental in her recent success. Kim certainly has looked in control this week in Charleston.

"Being chill didn't come naturally to her," said Brooks. "She had to fight through and learn about it and keep studying it."

Even though Liu considers Boutier to be one of her best friends on tour, don't expect much chatter on Sunday. They'll be too focused. While she had dreamed of going to Duke, playing alongside a close friend on Sunday at a major was something that hadn't crossed Liu's mind.

"We had pretty similar backgrounds growing up," said the 23-year-old Liu. "We were at Duke together for one year, and we won the National Championship together. But unlike her, I wasn't able to finish school. So I entered the pro rank a little earlier than she did.

"But we graduated from Symetra Tour the same year in 2017. And then last year we were an LPGA rookie together, and we played pretty well, saved our status. So, yeah, it's just really nice to have a best friend on tour."

Gina Kim, a rising sophomore at Duke, is part of a strong Blue Devils contingent at the U.S. Women's Open. (Photo: Getty Images)

Liu crushed the ball in college and relied heavily on her length.

"What she's done is develop the rest of her game," said Brooks, who looks forward to seeing that up-close-and-personal tomorrow.

Boutier, 25, clinched her first LPGA title earlier this year at the Vic Open. She won twice on the Symetra Tour.

"Celine got onto our team because of the way she fights when she's in the heat of the battle," said Brooks.

Sunday in Charleston will be the fight of her life.