SAN ANTONIO — The women’s basketball bracket has been largely predictable: The higher-seeded teams — with three exceptions, in upset defeats by Brigham Young, Wright State and Belmont — have advanced to the second round. It follows the general trend of the men’s and women’s tournaments: The men have more upsets, while the women’s favorites do well.

But even if their stays are brief, teams making their first or second appearances in the N.C.A.A. Division I tournament have put up a fight in an event that looks starkly different from years past because of the coronavirus pandemic. The newcomers seem grateful just to pave the way for their schools, and some have given top seeds a jolt.

“Definitely having a taste of playing in the N.C.A.A. tournament, we’ll be able to reflect and keep growing,” Stony Brook Coach Caroline McCombs told reporters after her team lost to Arizona on Monday.

High Point, Utah Valley, Stony Brook and Bradley made their N.C.A.A. tournament debuts in a so-called controlled environment, which is centered in San Antonio and has been set up by the N.C.A.A. and the local health authorities.

High Point, a No. 16 seed, was able to get good looks for 3-point shots on Sunday against UConn, the dominant program in the country for almost three decades.

Stanford caused trouble early on the way to an 87-44 win Sunday over the 16th-seeded Utah Valley, making seven 3-pointers in 11 attempts and taking a 20-point lead at the end of the first quarter. Utah Valley picked up speed in the second half, with 24 points to Stanford’s 34. Josie Williams, a center for the Wolverines, led the team with 18 points and 5 rebounds.

“They are a very physical team, Williams was an outstanding player for them,” Stanford Coach Tara VanDerveer said in a postgame interview.

Stony Brook, a No. 14 seed, was defeated, 79-44, by Arizona. The Wildcats, a No. 3 seed, had a 27-point lead at halftime. But the Seawolves were able to prevent their deficit from growing too much larger; they were outscored by only 8 points in the second half.

Arizona Coach Adia Barnes said that Stony Brook was “a really good third-quarter team, and they are a good second-half team,” in an interview with reporters following the game.

Bradley, a No. 11 seed, was scheduled to play sixth-seeded Texas at 8 p.m. Eastern on Monday.

Five of the teams in the tournament were making their second appearance, including Drexel, and another five were here for the third time, like Mercer. Drexel and Mercer were ousted in the first round, but not before giving their opponents a scare. 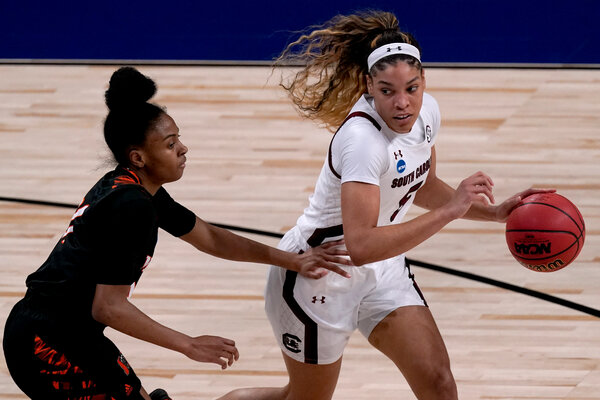 Mercer, a No. 16 seed, fell to top-seeded South Carolina on Sunday, 79-53. South Carolina had an 11-point lead after the first quarter, but Mercer bounced back with a 15-4 run at the beginning of the second, briefly tying the game at 27 with a pull-up jumper by guard Amoria Neal-Tysor. Even though the Gamecocks pulled away in the second half, the Bears’ defensive switches kept South Carolina on its toes.

“We knew they were going to junk it up, and one of our keys was offensive execution against their changing defenses,” South Carolina Coach Dawn Staley said in a postgame interview with reporters.

Drexel, a No. 14 seed, had a 15-10 lead over Georgia after the first quarter and was tied with the Bulldogs at halftime. No. 3-seeded Georgia took the lead in the third and pulled away in the fourth, scoring 27 points to Drexel’s 18 in that quarter.

Some lower-seeded teams have said adieu, but three had advanced by Monday evening, including Belmont, a No. 12 seed that defeated a No. 5, Gonzaga, 64-59.

B.Y.U., a No. 11 seed, pulled off the first upset of the tournament, beating No. 6-seeded Rutgers with a fourth-quarter reversal on Monday. Both teams had been to tournaments before, most recently in 2019.

The 13th-seeded Wright State, in its third tournament appearance, beat Arkansas, a No. 4 seed, 66-62. Raiders guard Angel Baker had 26 points, 12 rebounds and 4 steals in the upset.

“I’ve coached the men’s game, gone against some of the best, but some of the women I coach against, they’re better,” B.Y.U. Coach Jeff Judkins said in a postgame interview with reporters. “Against a really good team like Rutgers, to perform at our best, it’s hopefully something we can use a long way for our program.”