The city council approved an amended term sheet, 6-1, but doubts were raised by its members and the team’s president. 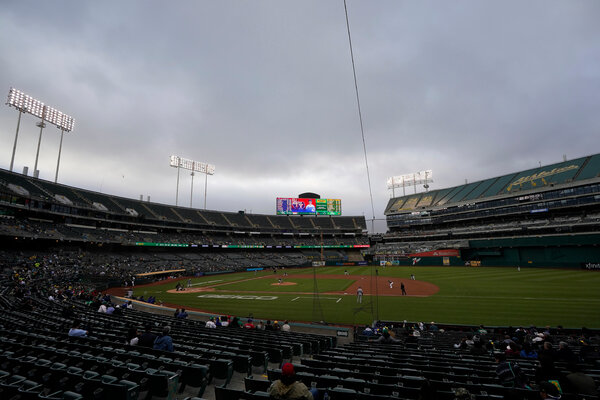 Plenty of reservations were expressed from all sides involved, but the Oakland City Council voted to accept an amended financial term sheet that keeps negotiations moving forward for a new stadium for the Athletics.

In advance of Tuesday’s vote, in which terms were laid out for a $12 billion redevelopment project of the city’s Howard Terminal area that would include a state-of-the-art ballpark, the team made it clear that a no vote would seal the team’s fate, forcing a move out of the city where it’s played for more than 50 years.

Council members, multiple of whom expressed a distaste at the project being negotiated through the news media, responded by voting in favor of the term sheet, 6-1, with one abstention.

Regardless of the final margin, deep reservations were expressed on both sides about the viability of the project.

Councilman Dan Kalb said he would “hold my nose” and vote yes. Nikki Fortunato Bas, the council’s president, emphasized the agreement was just a “road map for continued negotiations.” And Councilwoman Carroll Fife said she did not understand what the members were voting for, based on comments from Dave Kaval, the president of the Athletics, that indicated the team was unlikely to approve of the amendments added in advance of the vote.

“It seems like we’re voting on something the A’s are going to turn down,” she said.

Kaval, who participated in the meeting, said that the amendments, which require affordable housing, tenant and anti-displacement protections and environmental measures to be added to the plan, came as a surprise to him.

“To vote on something we have not really been privy to or had time to digest is a really difficult thing for us,” Kaval said. “It’s hard to understand how that’s a path forward.”

After the vote, Mayor Libby Schaaf of Oakland released a joint statement with Vice Mayor Rebecca Kaplan and Bas celebrating the decision.

“Today’s vote by the city council marks a milestone in our mission to keep the A’s rooted in Oakland and build a world-class waterfront ballpark district that will benefit the community for generations to come,” the statement said.

While Tuesday’s vote keeps the process moving forward, no final vote on the project can be taken until an environmental impact report is ready for approval later this year.

The Athletics, who have a lease at Oakland Coliseum that expires in 2024, moved to the city in 1968 and their once-modern facility is now the fifth-oldest active park in the majors behind Fenway Park, Wrigley Field, Dodger Stadium and Anaheim Stadium.

After several failed attempts over the years to build a new park in Oakland, and after a plan to move to the South Bay was blocked by the San Francisco Giants, Major League Baseball has publicly expressed support for the team to move to a new city should this latest proposal fall through.

While the Las Vegas metropolitan area is seen as the leading contender to lure the A’s away from Oakland, several other markets would likely seek to attract the team.