LONDON — Erica Dambach recognized that the words she was using to describe her former player Alyssa Naeher — “very quiet and reserved,” “unassuming,” “very, very humble” — were not ones most people immediately associate with an indomitable athlete.

Dambach, who coached Naeher for three seasons at Penn State, said she once had those very same concerns about Naeher’s serene demeanor. But then she watched Naeher play.

Whether the rest of the world sees it, too, will be one of the crucial questions for the United States women’s soccer team as it prepares to defend its World Cup title this month in France.

For more than two decades, elite goalkeeping has felt like a birthright of the United States squad. From 1994 to 2008, Briana Scurry made the penalty area her personal property. Hope Solo took over from there and compiled a résumé that made her arguably the best women’s goalkeeper of all time. Their teammates, and American coaches, reaped the rewards.

One or the other was in net for nearly every game in every major tournament the women’s national team has contested since the mid-1990s. Each has won a World Cup title. Each has two Olympic gold medals in her trophy cabinet. 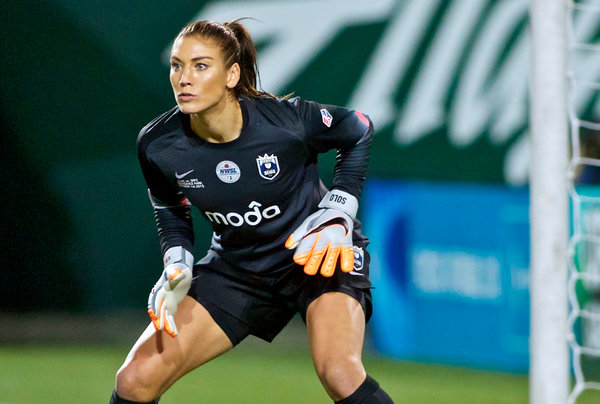 And now? Naeher, unknown to most of the world, and perhaps to many casual American fans just tuning in for the World Cup, has stepped into the starting role. Her ascension since Solo was ushered out of the program after the 2016 Olympics has brought with it an incessant stream of chatter about her readiness — not criticisms, precisely, more like open-ended inquiries — that she has had to parry away like any cross driven into the goal mouth.

And Naeher is not particularly interested in engaging with any of it.

“I compare myself to who I was yesterday and try to be better each day,” Naeher said. “I don’t compare it to anything else. I try to be Alyssa. That’s all I can control. That’s who I am.”

The comparisons, though, have been inevitable.

It was Scurry who helped crystallize them this year when she singled out the goalkeeping position as a potential problem area for the United States as it chases another World Cup title.

“In the past, when you look at strengths and weaknesses of the U.S. team, goalkeeping has always been in the strength column,” she told The Philadelphia Inquirer, “and right now it’s in the question column.”

Scurry’s implication was that Naeher had not been tested on the big stage. But the nature of the position — there can be only one — and Solo’s long, dominant tenure meant Naeher never really had that chance.

Until now. Naeher, 31, has been awaiting this opportunity for years. She grew up in Connecticut, playing alongside and against her twin sister, Amanda, who was a striker and therefore an ideal practice partner.

Naeher turned professional after leaving Penn State in 2010, and in 2014, after two years in Germany’s Bundesliga, she returned to the nascent National Women’s Soccer League and was promptly named its goalkeeper of the year. A year later, she watched from the sideline as Solo played every minute of the 2015 World Cup. The same thing happened the next summer at the Rio Olympics.

Among Scurry’s comments this year was the assertion that, at some point, a goalkeeper looking to prove herself needed to carry a team on her shoulders. Dambach said she watched Naeher do just that over and over during their time together at Penn State.

“The game would be over and I would think, ‘Alyssa pulled out two game-winning saves for us,’ and I feel like that was the case week in and week out,” Dambach said. “And then the next day, she’d come in, quiet, unassuming, and get back to work.”

In that way, Naeher operates at a different volume than her predecessor.

Solo was the type to appear on “Dancing With the Stars,” to party hard and tell people about it, to taunt opponents and challenge teammates. She was also an immensely skilled goalkeeper. She made 202 appearances, notched 102 shutouts and at one point ran off a 55-game unbeaten streak.

Back then, Naeher could only wait for her turn. After climbing her way through the youth national team ranks, she made her first senior national team appearance in December 2014. And then she waited some more.

“We all have big-picture hopes, but I tried to stay in the moment,” Naeher said about her years as a backup. “You can play the what-if game round and round and round. But the more I can avoid that, the better off I am.”

Naeher’s chance came, finally, when Solo was suspended from the national team in 2016 for what was portrayed at the time as an accumulation of transgressions, most notably some explosive comments in the wake of the Americans’ loss to Sweden in the Olympic quarterfinals. There was a protracted competition between Naeher and Ashlyn Harris for the No. 1 spot — with questions all the while about whether Coach Jill Ellis should have done more much earlier to groom a successor — but eventually Naeher emerged the winner. Ellis has praised Naeher’s foot skills in particular, which make her a more active player in a unit that has tried to play the ball out of the back more, rather than just punt it downfield.

Solo’s presence, and her continued popularity with fans loyal to her, sometimes still hovers over the team, but the current goalkeepers on the roster — Naeher, Harris and Adrianna Franch — have become adept at ignoring it.

“There are a lot of great goalkeepers in the past who have pioneered the position, but we’re about moving forward,” Harris said. “Everyone will always have something to say, and that’s O.K. We’re used to it.”

The time for talk has ended, anyway. The Americans kick off their World Cup title defense on Tuesday in Reims. Enough of a disparity in quality remains at the World Cup that the United States is expected to waltz through the group stage, but the talent gap has narrowed enough that the Americans no longer can expect to waltz into the semifinals.

The veteran defender Becky Sauerbrunn, who anchors the back line just in front of Naeher, said she was confident that Naeher’s performance, and attitude, were peaking at the right time.

“What I’ve seen, probably within the last few months, is just this, for lack of a better term, badassery, where she’s just owning it now,” Sauerbrunn said. “She knows that she’s the No. 1, and she knows how good she is, because we’ve been telling her how good she’s been and how good she is.”

Andrew Keh is an international correspondent, covering sports from Berlin. He has previously covered Major League Baseball and the N.B.A. and has reported from the World Cup and the Olympics. @andrewkeh