ORLÉANS, France — The first Women’s World Cup on French soil was only days away, and Delphine Cascarino, a 22-year-old French wing with the speed and dribbling skills to become a breakout star over the next month, was about to exit the cozy stadium in Orléans where the French team had beaten Thailand, 3-0, in a friendly match. But first she had one last stop to make: A group of about 200 fans, mostly young girls, was waiting for Cascarino and her teammates outside for autographs and pictures.

“We can sense the French public is really here for us and behind us,” Cascarino said. “We know what a big opportunity this is.”

This summer’s World Cup, which begins Friday with host France facing South Korea in the Parc des Princes in Paris, is an unprecedented chance for women’s soccer to reach a wider audience at home.

The tournament comes one year after France’s men’s team won the World Cup for the second time, sparking celebrations throughout the country and a renewed sense of France’s ability to bridge societal divides for a common cause. 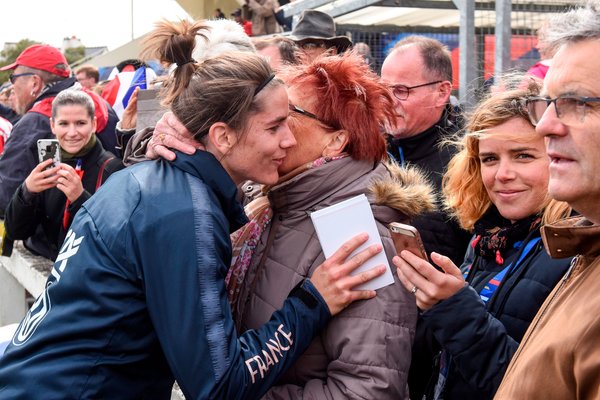 The halo effect of that triumph has since dissipated amid a wave of protests and smashed shop windows in major cities led by members of the yellow-vest movement, but in addition to providing another chance to emphasize unity, this home World Cup is a fresh opportunity to banish some of the stereotypes that linger about women’s soccer in France.

The French Football Federation is not hesitating to build a bridge between the tournaments — one of the federation’s commercial partners is running a marketing campaign under the slogan, “Don’t wait for 2022 to relive 2018” — even if some of the women’s team’s leaders, like striker Eugénie Le Sommer and others, profess frustration with the constant comparisons between men’s and women’s soccer.

We don’t talk much about the guys, so as not to put too much pressure on ourselves,” said Amandine Henry, the captain of the French team. “But we do want to ride the wave of their success. We have seen so many emotions in the country last year. We want to experience something similar.”

But can women’s soccer, long of minor interest in France, truly become a national focal point or, better yet, a rallying point?

“Much will depend of course on how the French team performs,” said Vincent Duluc, a journalist at France’s sports daily L’Equipe who is widely considered the country’s top soccer writer. “But what I do know is that the French media will play the game like they have never played it before.”

For the first time at a World Cup, the French women’s team’s games and the final rounds of the tournament will be broadcast on TF1, the nation’s leading free-to-air network. TF1 will use the same main commentary duo for the French women’s matches that it uses for the men’s matches: the commentator Gregoire Margotton and the former France star Bixente Lizarazu.

Duluc said L’Equipe, the most influential sports publication in France, sent only two reporters to cover the last women’s World Cup in Canada in 2015, where the French team lost to Germany on penalty kicks in the quarterfinals. This time, L’Equipe intends to deploy more than a dozen reporters, including four dedicated to covering France’s team. That includes Duluc, who has covered nine men’s World Cups and has been assigned to follow his first women’s World Cup this summer instead of covering the men’s team as it plays qualifying matches for the 2020 European Championship.

“I think all this is a sign that the world is changing, even if it changes very slowly and not completely,” Duluc said. “In the media here, I think people are perhaps eager to do more than what is strictly necessary. It’s a bit like everyone must show their absence of sexism and support the idea that we treat everyone the same way, which is of course not yet true. But even if the French media are going to do a lot with this World Cup, it’s also because we sense the public will be there.”

Women’s soccer has no doubt come a long way in France. It was banned during the Vichy regime in the 1940s, along with some other women’s sports. The first women’s club teams were not created until the late 1960s, and the women’s national team did not qualify for the women’s World Cup until 2003. A decade ago, three national team players resorted to posing for nude photos in an effort to draw attention to their low profile. “Is this how we should show up before you come to our games?” the headline read.

But as France’s international fortunes improved, the country has become a leader in the professional game. Its most decorated and best-financed team, Olympique Lyonnais Féminin, now dominates European club competitions: It has won six Champions League titles since 2011, including the last four.

“It used to be the French players went overseas to play for their clubs, and now it’s the overseas players who come to France,” said Marinette Pichon, France’s career scoring leader, who played professionally in the United States before she retired in 2007. “Compared to our time, it’s day and night in terms of the means the women have at their disposal. In 2000, I was one of the few here who could make a living from it. Now nearly all the clubs offer professional contracts. It surprises no one now when a young girl says she wants to play soccer.”

But the French women’s team has yet to win a major trophy or an Olympic medal. Its best performance came in the 2011 World Cup in Germany, where it placed fourth after losing to the United States in the semifinals.

Since then, Brigitte Henriques, a vice president of the French Football Federation, said that the number of licensed female players in the country had increased to 138,000 from 54,000, and that the number of women’s teams at all levels had doubled, to about 6,000.

“We have a very clear vision for the World Cup,” Henriques said. “The French team must perform well, and the tournament must radiate throughout the country so it will attract even more girls and women.”

The French team’s players hope home-field advantage leads to a breakthrough, just as playing in France boosted the men’s team to its first World Cup victory in 1998. Henry, 29, said she was one of several members of the women’s team who were inspired to play the game at the highest level by that 1998 triumph.

“I said it was too beautiful; I want to do it too,” she said. “I want to hold up trophies. I want to sing.”

Like that iconic 1998 team, this 2019 women’s team is a rich mix of ethnicities and backgrounds that could speak to many different sectors of French society, including the Muslim community.

“That was a big talking point in 1998 but not so much now, which in a way is a sign of progress because it just seems natural,” said Arnaud Simon, the former chief executive of Eurosport France, who now runs a sports media consulting firm. “It is just ‘The French team,’ which is a sign things have progressed. But the fact this team is fully representative of French society is still very important to engage and embrace all of French society.

“Let’s not kid ourselves. The place of women in French society can be a bit different based on religion or the country of origin, so this diversity will show that women are taking the place they deserve in society, regardless of their race or religion or whatever.”

Henry and some of her teammates will have to push through fatigue after a long club season if they want their own celebratory bus ride down the Champs-Élysées. She and six other important members of the French team play for Lyon, which won its latest Champions League final on May 18. Le Sommer, who has scored 74 goals for France, missed the team’s final two friendly games because of a strained gluteal muscle. Henry, who had back problems, and left back Amel Majri, who has a leg injury, also skipped both games.

“Our team has a good level,” said Élise Bussaglia, the 33-year-old midfielder who is the team’s most experienced player, with 188 caps. “And for sure it makes us feel great to know that our federation is putting something in place to promote women’s soccer and that we’ll have a national network like TF1 broadcasting our games. All that is positive. But now we have to come through in the World Cup. Our national team is lacking that big title.”

It is also, for now, lacking a large and knowledgeable core audience. At one of its final World Cup warmup matches in Orléans on May 25, the 7,500-seat Stade de La Source was sold out for the friendly against Thailand, and the stands were awash in French flags (most provided by the organizers). But it was also full of banners that read “Allez les Bleus” rather than “Allez les Bleues,” and the crowd included many French fans wearing jerseys bearing the surnames not of Henry and Le Sommer but of Kylian Mbappé, Paul Pogba and other stars of the men’s team.

“What that reflects is that the general public goes to see the women’s team but doesn’t know which women to identify with,” Duluc said. “That’s because the story of club soccer in France is too intermittent. It’s a series with not enough interesting episodes. People wake up for the Champions League final, and they might identify two or three players in that final, one of whom is Ada Hegerberg, the Norwegian who plays for Lyon but is not playing in the World Cup.”

Hegerberg, who is sitting out the competition to protest what she perceives as unequal treatment of male and female players in Norway, will be doing studio work for TF1 during the World Cup while her French teammates try to become household names at home but also leave a legacy.

Before Cascarino headed out the doors of the stadium in Orléans to greet her young fans, she was asked what she hoped that legacy would be.

“I hope we play beautiful soccer,” she said, “And that all the little girls who see us will be inspired to put on some cleats and be inspiring themselves.”

Christopher Clarey has covered global sports for The Times and the International Herald Tribune for more than 25 years from bases in France, Spain and the United States. His specialties are tennis, soccer, the Olympic Games and sailing. @christophclarey