The talk of the Australian Open is not just who made the arduous journey to the second week, but whether a so-called “hard quarantine” has taken a toll on players who did not.

Several had to remain in their hotel rooms around the clock — deprived of a five-hour break for training and treatment afforded to everyone else — for 14 days after arriving if a passenger on their flight had tested positive for the coronavirus.

Though Tennis Australia has not released a complete list of the players who were in hard quarantine, at least 26 players in the women’s singles draw were in the stiffer quarantine, including 12 of the 32 seeded players.

Two former Australian Open champions, Victoria Azarenka and Angelique Kerber, lost their first-round matches after going through the hard quarantine. Six other women who had endured it reached the third round, but all lost in decisive straight sets.

“I mean, there’s no escaping the fact that we were in the room for two weeks before a Slam — that’s not how you prepare for a Slam,” said the 21st-seeded Anett Kontaveit, who lost on Saturday evening to Shelby Rogers. 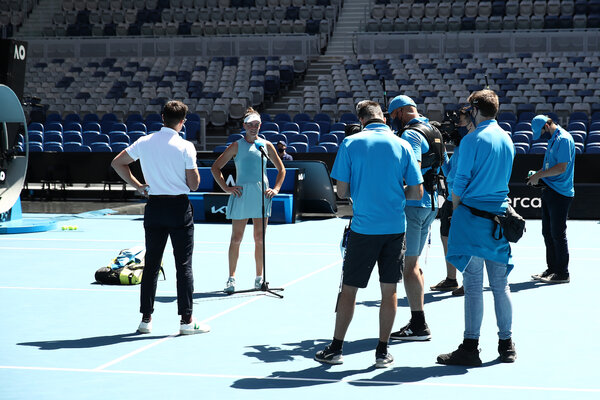 Yet consider the case of Jennifer Brady, the only woman who was in hard quarantine to advance to the second week.

Seeded 22nd, Brady has not only survived, but soared: She defeated Aliona Bolsova, 6-1, 6-3, in the first round on Tuesday and went on to victories over Madison Brengle (6-1, 6-2) in the second round on Thursday and Kaja Juvan (6-1, 6-3) in the third round on Saturday.

“At first I was a little bummed, and then I was like, OK, I’m fine,” Brady, of Pennsylvania, said of the hard quarantine in an interview on Saturday. “There’s worse things out there in the world than being stuck in a room for 14 days. It’s not the ideal preparation before a Grand Slam, but if you looked at it, you’d see you still have eight days before your first match at the Grand Slam.”

Brady said she slept more than usual during the 14 days, often not waking up until around 11 a.m. She worked out twice a day, at noon and around 5 p.m. Brady’s coach, Michael Geserer, said that while Brady used tennis balls, a stationary bicycle and weights, her most important work was mental.

“We couldn’t simulate on-court practice, but we tried as best we could to adapt to this new situation,” Geserer said. “The most important thing was the mind-set. We were not complaining. We were taking it.”

For Brady, who surged up the rankings last season as she won her first WTA title and reached the United States Open semifinals, the forced confinement proved a welcome respite.

“Coming out of the quarantine, speaking for myself, I was definitely a lot fresher mentally,” Brady said. “It was a long year for me last year. I didn’t really take a break. Deep down inside, I was a little bit fortunate that I had the 14 days in lockdown. It kind of helped me reset mentally — and physically, also.”

As she eased herself back into physical activity when the quarantine ended, Brady was relieved by how she felt on the court.

“The first two hits I had I was trying to feel the ball, and just get my feel for the court and moving, not trying to overdo it because I didn’t want to risk injury,” Brady said. “I was afraid I was going to be super-sore, which I actually wasn’t.”

Far from being sore, Brady has been craving more time on the court. After her win over Juvan, which was straightforward except for an 18-minute service game midway through the second set, Brady immediately booked herself a practice court to hone her technique.

Brady admitted, ultimately, that she did not expect things to work out as they had, finding herself in the second week of the Australian Open after her compromised confinement.

One aspect of this unusual Open for which Brady may be uniquely prepared is the lack of spectators. Because of a five-day “circuit breaker” lockdown enacted by the state of Victoria, matches are being played before empty stands, as they were at the United States Open in September.

“I think especially in the first couple games of the match, having that atmosphere of having people cheer for you and wanting you to win, you put a little extra pressure on yourself,” Brady said. “Having no fans, it’s just you and your opponent out there.”