For most of his presidency, Donald J. Trump reliably called out athletes who he felt were disrespecting the national anthem, the flag and him.

But the killing of George Floyd in police custody in Minneapolis on May 25 set off waves of protest and galvanized athletes in an election year to more forcefully repudiate Trump’s demand that players stand during “The Star-Spangled Banner” before games. Athletes were also inspired to spur voter registration and turnout as stadiums and arenas became polling places.

As the election neared, Trump, perhaps unexpectedly, receded from the anthem, his most contentious sports wedge issue. He attempted another sports-related strategy: pressuring the Big Ten Conference to start its college football season immediately and then trying to take undeserved credit for the reversal of the league’s initial decision to try to have a season in the spring.

But the play to shore up his support in the Midwest did not pan out: He lost the Big Ten blue wall states of Illinois, Michigan, Minnesota, Pennsylvania and Wisconsin.

“Trump sought to divide that. He wins by subtracting. To a certain extent, he succeeded for a little bit. But by the end of June this year, it was a complete failure for him.”

Upon seeing disturbing video of Floyd being fatally pinned beneath the knee of a police officer — four years after the former San Francisco 49ers quarterback Colin Kaepernick knelt to protest racial injustice and police violence — people “understood the outrage in a new way and why a Black player would want to exercise his or her right to protest,” said Kevin Sullivan, the communications director for former President George W. Bush.

Floyd’s death set off a cascading series of actions by athletes, sports officials and leagues that more uniformly disavowed Trump’s stance on the anthem, even if the pushback appeared to have little impact on the election in a divided country, political experts said. Trump, who used the anthem issue to fire up his base, still received more than 72 million votes — significantly more raw votes than in 2016 — while losing re-election to Joseph R. Biden Jr., who earned more than 77 million votes.

In the late stages of the campaign, Trump seemed to largely abandon the anthem as a political cudgel, while also playing down issues like the coronavirus pandemic, even as he became infected. Instead, he focused his attention on his political opponent and baseless predictions of a rigged election if he lost. 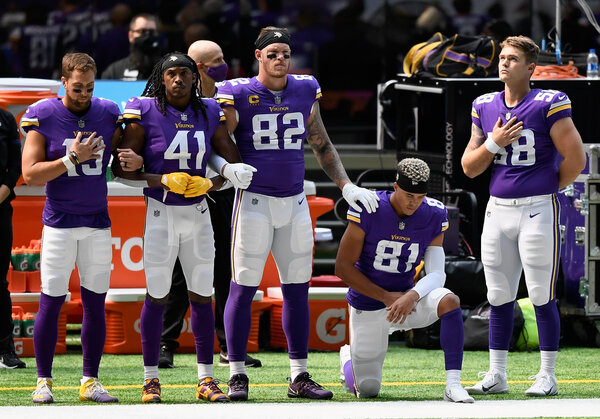 “He had bigger fish to fry in an election year,” said Ari Fleischer, Bush’s White House press secretary. “His opponent wasn’t the N.F.L. It wasn’t Colin Kaepernick. It was Joe Biden.”

Still, as spring became summer after Floyd’s death, sports leagues and athletes increasingly disregarded Trump. In early August, LeBron James of the Los Angeles Lakers laughed and said Trump wouldn’t be missed after the president said he had stopped watching the resumption of the virus-disrupted N.B.A. season, calling kneeling for the anthem “disgraceful.”

By the fall, even youth football teams were taking a knee. And Trump’s response via Twitter and public rallies seemed at times to deflate from raging defiance to aggrieved resignation.

“One day it was a huge issue,” the Democratic strategist James Carville said of the anthem. “The next day it was no issue.”

Doug Sosnik, the political director for Clinton, described Trump in an email as a verbal “day trader” who, once his lines begin to fall flat, “moves on to the next shiny object that will arouse his supporters.”

What Trump misunderstood about players kneeling for the anthem, Sosnik said, is that most Americans believe strongly in the First Amendment, and Floyd’s death made it “hard for anyone not to view the protests as anything but an appropriate reaction to such outrageous behavior.”

Trump had sparred with the N.F.L. for decades. In the 1980s, as a franchise owner in the upstart United States Football League, he led a movement to file an antitrust suit against the N.F.L., only to be left embarrassed by a reward of $3 in damages.

At a political rally in September 2017, Trump denounced any player who would kneel for the anthem, imploring N.F.L. team owners to “get that son of a bitch off the field right now.” But by June 2020, he reacted to a turbulent 48-hour period in the N.F.L. with the social media equivalent of taking his ball and going home, having lost his ability to bully the country’s most popular sports league.

On June 3, in an interview with Yahoo Finance, at a time when many Black athletes were demanding racial justice in the wake of Floyd’s death, New Orleans Saints quarterback Drew Brees essentially sided with Trump by saying, “I will never agree with anybody disrespecting the flag of the United States of America or our country.”

His remarks seemed tone deaf to many and drew lacerating responses from Black teammates and others around the N.F.L., a league where three-quarters of the players are African-American. A day later, Brees apologized in an Instagram post, saying his comments were “insensitive and completely missed the mark.” He asked for forgiveness in what seemed to be a mix of self-preservation and reflection.

On June 5, Trump posted on Twitter that he was a “big fan” of Brees, but that the quarterback should not have rescinded his original stance. “NO KNEELING!” Trump tweeted.

But Brees forcefully rejected the president’s position that same day. He wrote on social media: “This is not an issue about the American flag. It never has been. We can no longer use the flag to turn people away or distract them from the real issues that face our black communities.”

At the time, Roger Goodell, the N.F.L. commissioner, also faced intense pressure from Black players demanding that he condemn racism. In a video, he encouraged peaceful protests and issued a mea culpa for not listening earlier to concerns about social justice.

Goodell was widely criticized for not mentioning Kaepernick’s name. And Brees did not risk his career, as did Kaepernick, who has been out of the N.F.L. for four seasons. But Harry Edwards, the sports sociologist, said it was important for Black players to gain acknowledgments of regret and support from a white star like Brees and from Goodell, the commissioner of a league where some prominent team owners had given millions to Trump’s political coffers.

“It takes courage and character to say, ‘You know what, I’m wrong,’” said Edwards, a consultant for the 49ers who has been involved in social justice movements for more than a half-century. “It left Trump turning in the wind.”

On June 9, the United States Soccer Federation rescinded its ban on players kneeling for the anthem.

“I won’t be watching much anymore!” Trump tweeted on June 13. He also connected the move by U.S. Soccer to pro football: “And it looks like the NFL is heading in that direction also, but not with me watching!”

A week later, at a rally in Tulsa, Okla., Trump seemed puzzled by pushback from Goodell, Brees and other N.F.L. stars, wondering, “Where did that come from in the middle of the summer?”

“I thought we won that battle with the N.F.L.,” Trump said.