Mick Fanning has caused a major upset at Bells Beach, defeating world No.1 Kanoa Igarashi to move into the round of 16 at the Rip Curl Pro.

The four-time Bells Beach champion is competing as a wildcard and aiming to win for the fifth time after retiring from the tour in 2018. He said he had been on the end of shock defeats to wildcards while wearing the yellow jersey during his career, but was just trying to enjoy the ride. 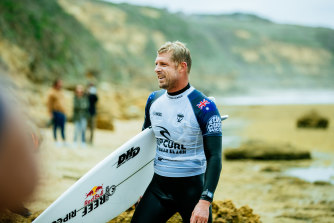 Mick Fanning is into the round of 16 at Bells Beach.Credit:World Surf League

“I had it so many times throughout my career where a wildcard would come through and take you out, and it ruined your day,” Fanning said.

“But everyone else in the field wants you to go out and play that spoiler, so for me, I’m just having fun.

“I guess as a wildcard you want to come on and put on a performance, and coming up against the world No.1, I’ve got nothing to lose.”

It was a tactical affair, with Fanning controversially ending a wave early to make sure he had priority with just minutes left in the heat. That confused his Japanese opponent, who thought he would get priority in search of a wave to jump ahead of the Aussie on the scoreboard.

Igarashi did catch a wave late, with about 90 seconds left in the heat, but the score wasn’t enough to defeat Fanning.

The draw now opens up for the 40-year-old champion, who may clash with American Kelly Slater in a semi-final if the pair continue to win their way through the knockout tournament.

“I’m just stoked we got some waves. It was tight at the end and we had a couple of back-to-back moments which is fun, it’s what you want to do, and I just want to keep catching waves.

“I remember Matt Hoy saying back when he won Bells in ’97, he just wanted to keep catching perfect waves at Bells and that’s what I kept doing, but I didn’t realise my fitness level wasn’t up to it.”

Asked whether he could start to dream about winning a fifth title at Bells, Fanning said: “I’m thinking about getting some air, I’m gassed. This old boy ain’t fit.”

Earlier in the day, both Jordy Smith and Griffin Colapinto were knocked out at Bells by Aussies Jackson Baker and Owen Wright respectively.

Ethan Ewing, Connor O’Leary and Morgan Cibilic also progressed to give Australia at least six representatives in the final 16.

News, results and expert analysis from the weekend of sport sent every Monday. Sign up for our Sport newsletter.