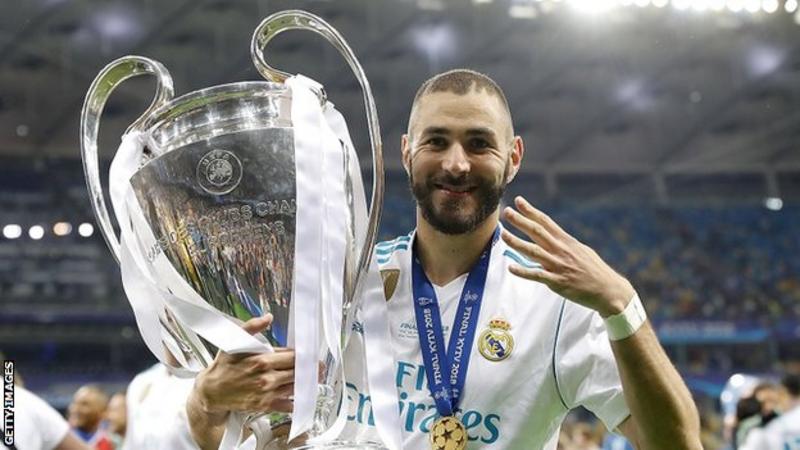 “He is one of the most underrated players in the world.”

On Tuesday, the pitch at the Bernabeu will be full of star players, from Kylian Mbappe to Eden Hazard and Neymar to Edinson Cavani – plus possibly Gareth Bale – when Real Madrid host Paris St-Germain in the Champions League.

However, that pre-game assessment by PSG boss Thomas Tuchel was not about any of those much-hyped superstars.

It was about Real striker Karim Benzema.

In 2009, Cristiano Ronaldo joined Real for a then world-record £80m fee from Manchester United and Benzema was approached to replace him at Old Trafford.

The France forward rejected the move and instead the two became team-mates as he too joined the Spanish giants from Lyon for £30m.

A decade on, having been described as “a tad overrated” by ex-England striker Gary Lineker, how has Benzema outlasted Ronaldo and many others at the Bernabeu and is his talent – and longevity – overlooked?

‘A record to rival Europe’s best’

At a time when Ronaldo and Barcelona’s Lionel Messi have taken the sport to new levels with their goalscoring figures as they battled for supremacy, Benzema’s own records have flown under the radar.

Real know victory over PSG will guarantee a place in the knockout stages of the Champions League and will hope to gain revenge for the 3-0 defeat in the reverse fixture.

But it was in their previous European game – a 6-0 thrashing of Galatasaray – in which Benzema, according to boss Zinedine Zidane, did something “amazing”.

His two goals meant he became only the second player after Messi to score in 15 consecutive Champions League campaigns – even Ronaldo has not yet achieved the feat as he failed to score in the group stage for United in the 2005-06 season.

Reaching the landmark of 50 goals saw him overtake Real’s legendary striker Alfredo di Stefano in Europe, while only the two usual suspects – Ronaldo and Messi – and Robert Lewandowski (59) have scored more than Benzema in the Champions League since 2009.

Just three days later, a double against Eibar in La Liga took him to sixth on the all-time list of Real scorers, overtaking another legend in Ferenc Puskas, and with 234 strikes he also became the highest-scoring Frenchman at a foreign club – surpassing Thierry Henry’s record at Arsenal.

On the pitch he has seen off competition from the likes of Gonzalo Higuain and Alvaro Morata, while big-money summer signing Luka Jovic cannot get a look in, netting just once this campaign.

Benzema, instead, continues to lead the Real line and is La Liga’s top scorer with 10 goals this season; his total of 25 strikes in 2019 is bettered only by Messi in Spain.

What makes Benzema so effective – and popular?

A senior club source reportedly said in April, “they have been criticising him for 10 years and he is the best”, while in September Benzema topped a Marca poll of most underrated players.

“I think the lack of recognition for his talents does get to him,” says BBC World Service Sport’s John Bennett. “Back in January, L’Equipe published their shortlist of 15 strikers for its 2018 World XI.

“Benzema was nowhere to be seen and he took to social media, writing ‘hey L’Equipe, my friends. Am I maybe 16th?’. Sadly off-field controversies will probably mean he never gets the credit he deserves, certainly in France.”

As well as finding the net on a regular basis, Benzema has also been a constant source of goals for his Real team-mates since joining in 2009.

“Benzema has been extremely popular with managers and with fellow players at Real Madrid for getting the best out of his team-mates,” adds Bennett.

“You don’t get many top strikers who are known for being unselfish but Benzema is one of them. He is a real team player.

“The Frenchman played a huge part in Ronaldo’s success at the Bernabeu, giving him more assists in La Liga than any other Real Madrid player.

“His goalscoring record also stands up to scrutiny. Yes there have been lean times but he scored 30 goals last season in all competitions, a number he only bettered in his second season at Real Madrid.

“Benzema works harder than he is given credit for, on and off the pitch. You don’t reach his levels of consistency without incredible fitness and without living your life right off the pitch.”

Despite his record at club level putting him among Europe’s elite, he remains conspicuous by his absence from the France squad.

Benzema has netted more league goals than compatriots Antoine Griezmann and Alexandre Lacazette, as well as Olivier Giroud, who played all seven games at the 2018 World Cup but failed to score.

He has not played for the national team since a sex tape scandal in 2015, a case that was later dropped, but he missed Euro 2016 and the World Cup triumph two years later.

During this month’s international break the president of the French Football Federation Noel Le Graet suggested there was no way back by saying although Benzema is “a very good player”, the “adventure is over”.

Bennett adds: “His final France game was in October 2015 but his name still comes up during every international break, with many pundits in the country rueing the fact he can no longer play for the team.

“It is worth remembering he was criticised towards the end of his time in a France shirt for not playing as well for his country as he was for his club but few would argue that if it wasn’t for the scandal he would be starting ahead of Giroud.

“He would also have a World Cup winner’s medal in his trophy cabinet.”