The talk show, which will also be unveiled as a podcast, will be called "Up On Game" and feature no traditional host. It's set to debut Dec. 5 with a broadcast time of 1-3 p.m. ET on Fox Sports Radio's 400 stations.

“LaVar, TJ, and Plaxico have such unique perspectives, which will make for a truly unique and entertaining listen. This is not going to sound like any other talk show," Fox Sports Radio vice president of sports programming Scott Shapiro said in a statement provided to Front Office Sports. 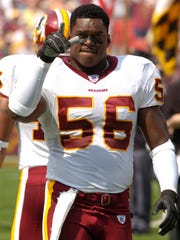 The showwon't just stick to sports. In an interview with Front Office Sports, Arrington said some of the people he consulted included Jamie Foxx and wrestler Booker T, along with Saints coach Sean Payton and Buccaneers quarterback Tom Brady.

“It’s all related," said Arrington, a three-time Pro Bowler. "If you have the right group of people speaking on these topics it turns into magic."

The 42-year old Arrington has been on FS1's "Speak for Yourself," along with making appearances on NFL Network and radio shows in Washington, DC.   Houshmandzadeh, a former Pro Bowl wide receiver who played 11 seasons, has also contributed to “Speak For Yourself." He has been a weekend radio show personality with the network since 2018, according to Front Office Sports. Burress, an 11-year NFL player, caught the winning pass in Super Bowl XLII.