The Toronto Raptors, less than 48 hours removed from winning their first N.B.A. championship, were still partying in Las Vegas on Saturday when LeBron James, in his own incomparable way, broadcast his gravitational pull on the rest of the league.

On Instagram, James took a break from posting photographs of his children and his agent and his luggage to share a new one: an illustrated portrait of himself standing next to Anthony Davis, his soon-to-be teammate, both of them wearing Lakers uniforms.

“Just the beginning,” James wrote in the caption.

For months, James had made it clear that he wanted the Lakers to acquire Davis, one of the league’s best big men. On Saturday, the Lakers obliged by agreeing to a deal with the New Orleans Pelicans, who will send Davis to Los Angeles for three of the Lakers’ most promising young players — Brandon Ingram, Lonzo Ball and Josh Hart — and three first-round picks, including the No. 4 pick in Thursday’s draft.

It was a deal the Lakers needed to make. Not only did it please James, a four-time most valuable player whose career has an expiration date, but it gave the team a chance of vying for championships after months of dysfunction. Forgotten, for now, is the team’s playoff-free season — its sixth in a row — and all the front-office infighting and the fan protests at Staples Center.

The Lakers have more work to do, of course: It is unclear whether they will have enough cap space to sign a top-line free agent like Boston’s Kyrie Irving or Charlotte’s Kemba Walker to a maximum contract this summer. But next season is shaping up as something of a free-for-all. The Golden State Warriors dynasty has crumbled. The Raptors could lose Kawhi Leonard in free agency. And the Lakers, in a move fitting with the team’s past, are seizing an opportunity to throw their weight behind a superstar partnership, even if that requires mortgaging much of their future. 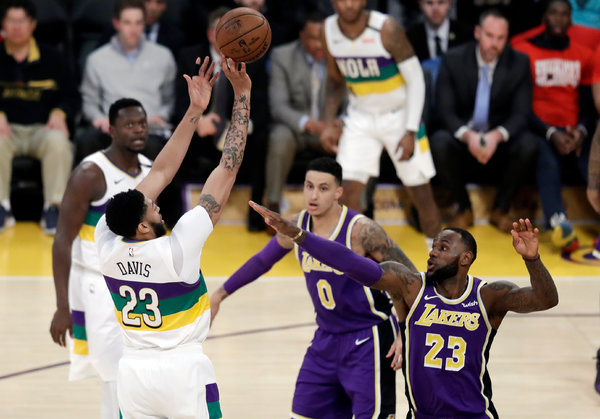 The deal is vaguely reminiscent of the 2013 trade between the Nets and the Celtics, in which the Nets gave up a boatload of future assets, including three first-round picks, for Kevin Garnett, Paul Pierce and a couple of other pieces. Garnett and Pierce were aging stars who helped nudge the Nets into the Eastern Conference semifinals in 2014.

But it was otherwise a colossal disaster for the Nets, and one of the most mocked trades in league history. Absent draft picks and the ability to build around youth, the Nets had the payroll of a contender while enduring four straight losing seasons — a run of futility that didn’t end until this season thanks to the patient craftsmanship of General Manager Sean Marks and Coach Kenny Atkinson.

The Lakers, though, could not afford to be patient, and everyone knew it, including the Pelicans, a team swimming in leverage. James exerted a unique pressure on the Lakers to win now, to trade for another top-shelf star, no matter the long-term costs. And those costs could be significant. Are they worth it? That depends.

Unlike Pierce and Garnett, who were in decline when they joined the Nets, Davis is an ascendant star at 26. He will presumably be one of the faces — and then the face — of the Lakers for years to come. But the Lakers will be leaning on free agency to round out their roster well into the next decade, a perilous strategy.

As for the James-Davis pairing, the championship dream hinges in large part on whether James can maintain his ultrahigh level of play. He has spent the later part of his career defying the corrosive effects of playing in so many games over so many long seasons. He will enter next season, his 17th, as the league’s active leader in minutes played. Consider that this past season, just five players from his draft class were active — including Dwyane Wade, who just retired, and Carmelo Anthony, who might as well.

It is easy to forget that James is not a young man by N.B.A. standards — or at least it was easy to forget until he tore a muscle in his groin on Christmas Day. It was the first major injury of his career. He wound up missing a huge chunk of the second half of the season and watched the playoffs from home for the first time since 2005.

When healthy, though, James was doing LeBron-type things, averaging 27.4 points, 8.5 rebounds and 8.3 assists in 55 games. With the Pelicans, Davis averaged 25.9 points, 12 rebounds and 2.4 blocks in 56 games. To state the obvious: They could be a fearsome duo.

But the Lakers also desperately need depth, shooting, a point guard and continued development from Kyle Kuzma, the one promising player they managed to retain. They also need James to keep his limbs intact. The team would perhaps be wise to adopt the “load management” strategy that the Raptors used this season to preserve Leonard for the playoffs.

That would be asking the Lakers to exercise prudence, though, something the team has steadfastly avoided not just in recent seasons, but going back decades.

For a team that has always seemed bent on big moves at any price, it might be a nice change of pace. 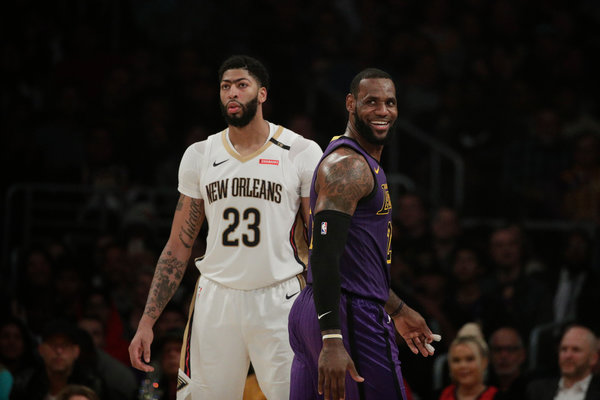