THREE games in and it already looks a foregone conclusion. 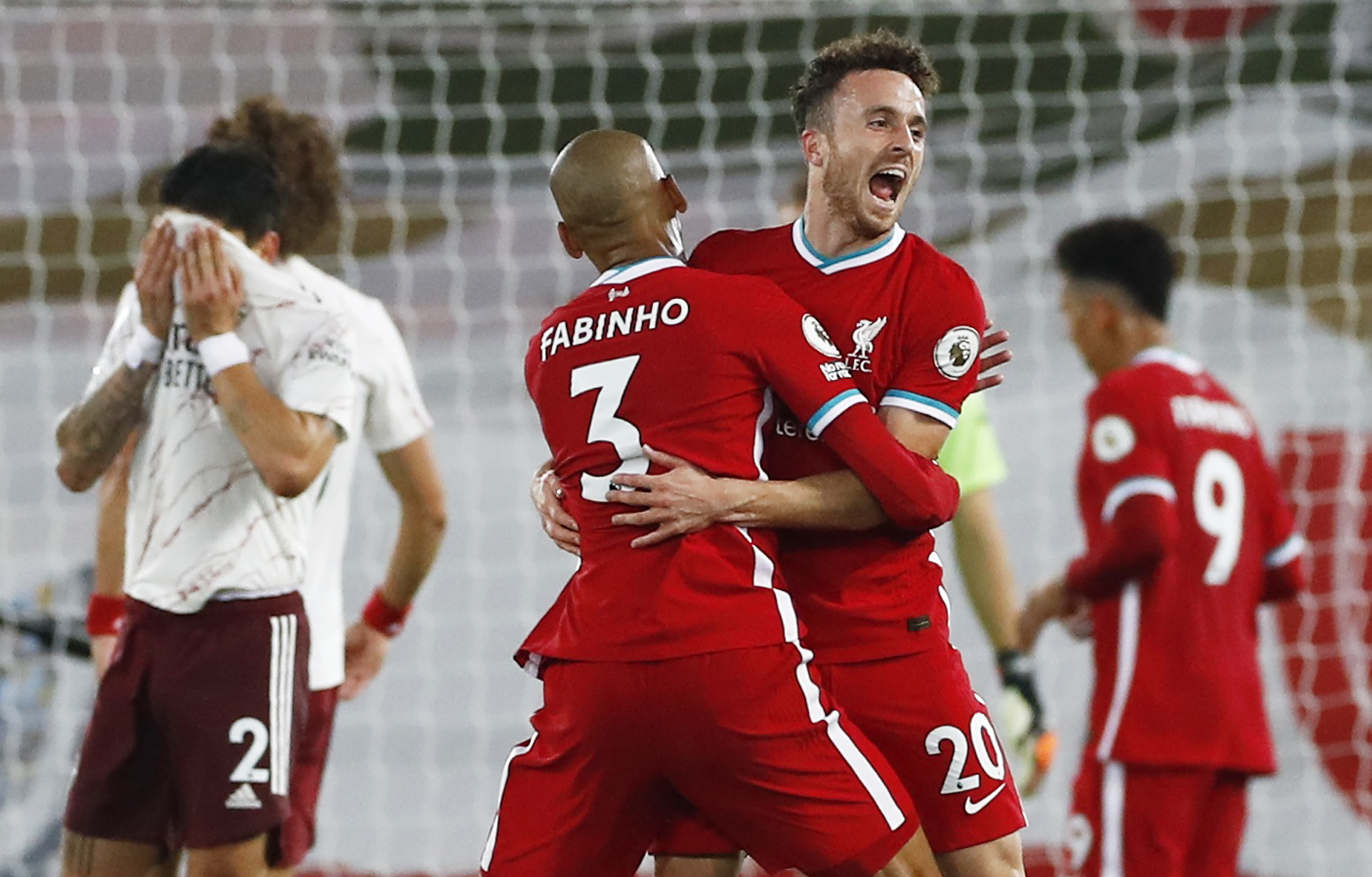 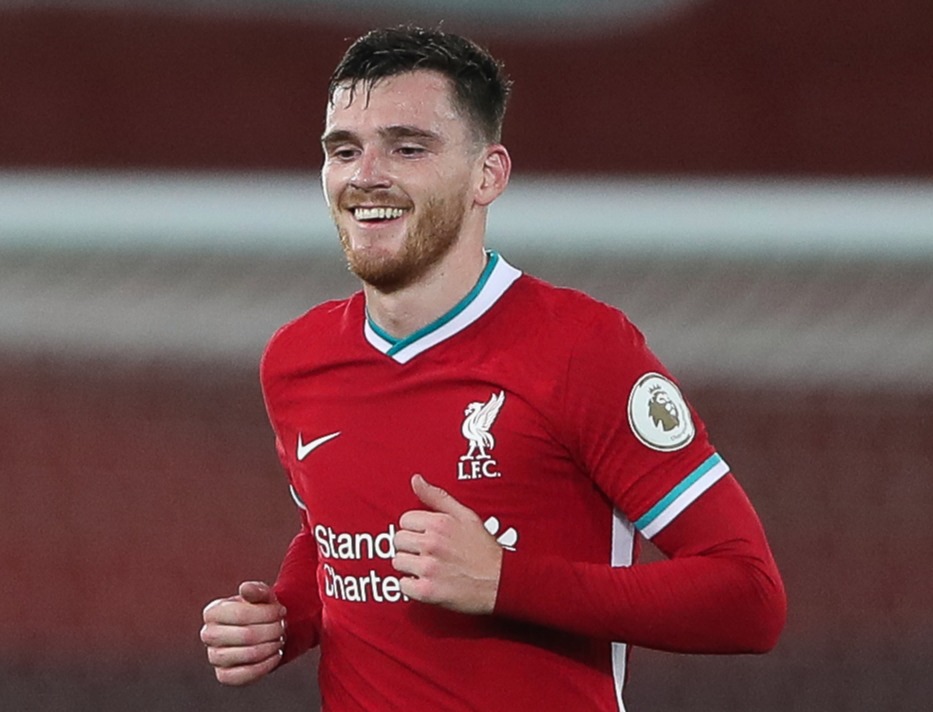 And the rest of the ‘big six’ – Tottenham and both Manchester clubs – all well beaten in their opening home matches.

Even during this crazy, goal-drenched, controversy-ridden, fan-free start to the Premier League season, Liverpool winning is as inevitable as death and taxes.

The rest of them might as well start dishing out guards of honour to Jurgen Klopp’s men. It promises to be another procession.

Okay, so Everton and Leicester can point to perfect starts but nobody expects either of them to keep up the pace.

Klopp’s men are a country mile ahead of what you might call a chasing pack, if any of their most obvious rivals had any major forward movement.

Arsenal are improving but were 43 points adrift of the champions last season and they are not improving at anything like that sort of rate.

Even against a Gunners side who did much to prove they had eradicated their institutional softness, Liverpool always had too much.

As in their first home match, a 4-3 win over Leeds, this was far from defensively flawless – Andy Robertson was guilty of a shocking error to gift Alex Lacazette an opener. 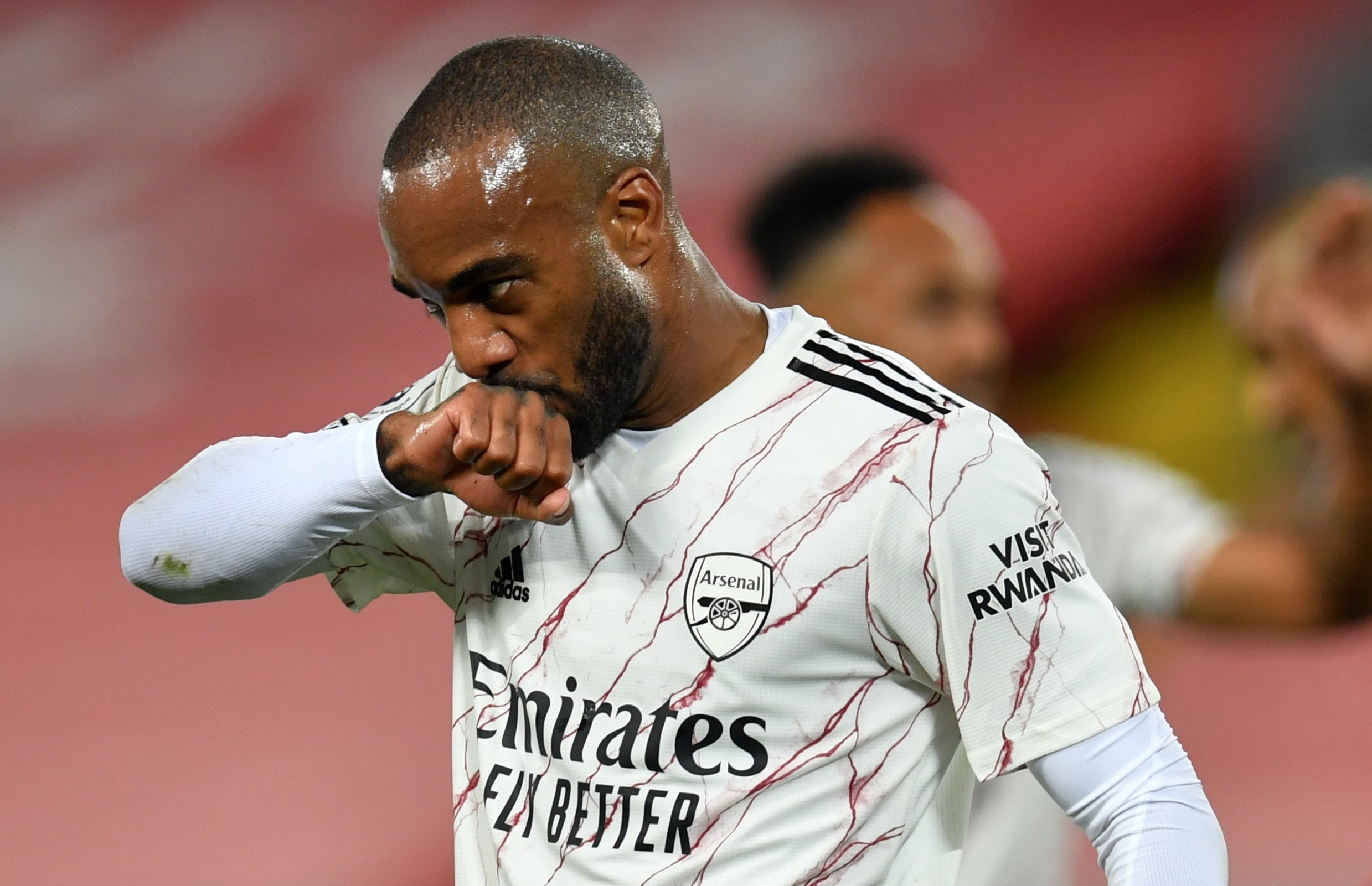 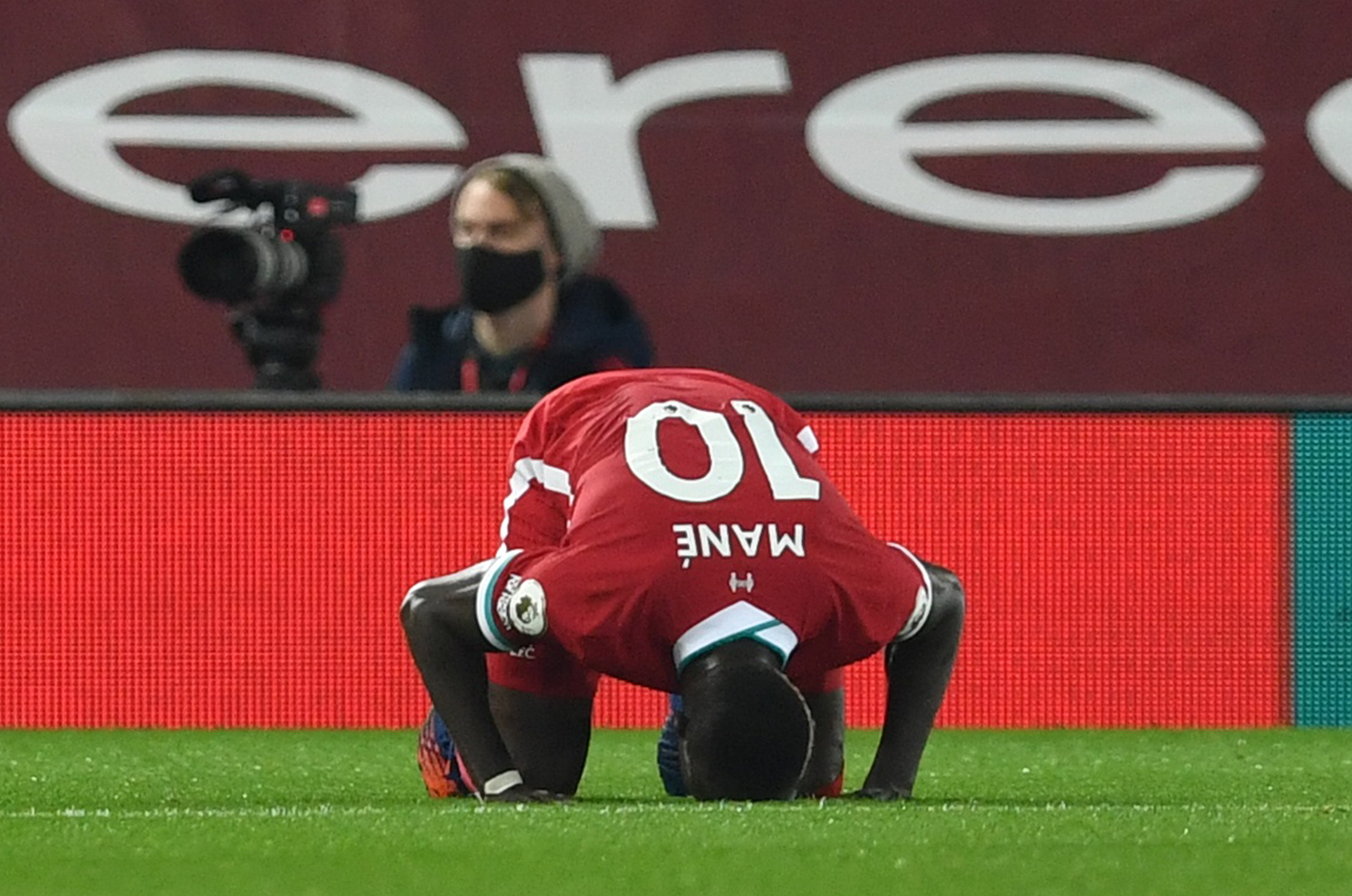 But Liverpool were ahead within ten minute of that, with an equaliser from Sadio Mane and a swift piece of atonement from Robertson.

And new boy Diogo Jota marked his league debut with a third late on.

The energy and ingenuity of this Liverpool team make them unplayable at times.

And even when Arsenal made a real game of it throughout much of the second half, the champions marched on.

And this without either of their two high-quality new signings – Thiago Alcantara and Diogo Jota – having yet made a league start.

Arsenal, who had squeaked a fortunate win over West Ham last week, and arrived at Anfield with some confidence, having defeated the champions twice since restart.

But those were in a dead rubber and a Community Shield penalty shoot-out. 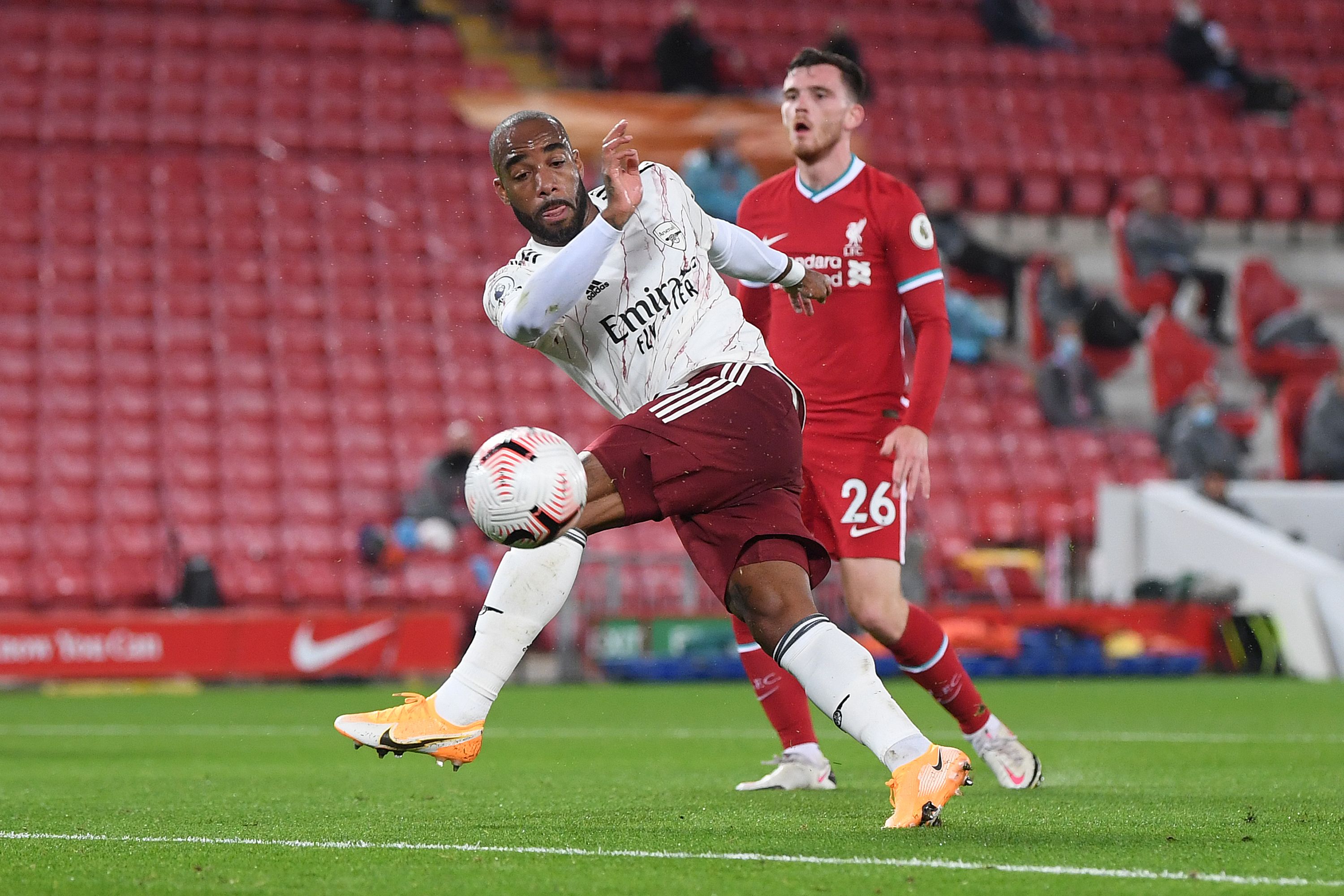 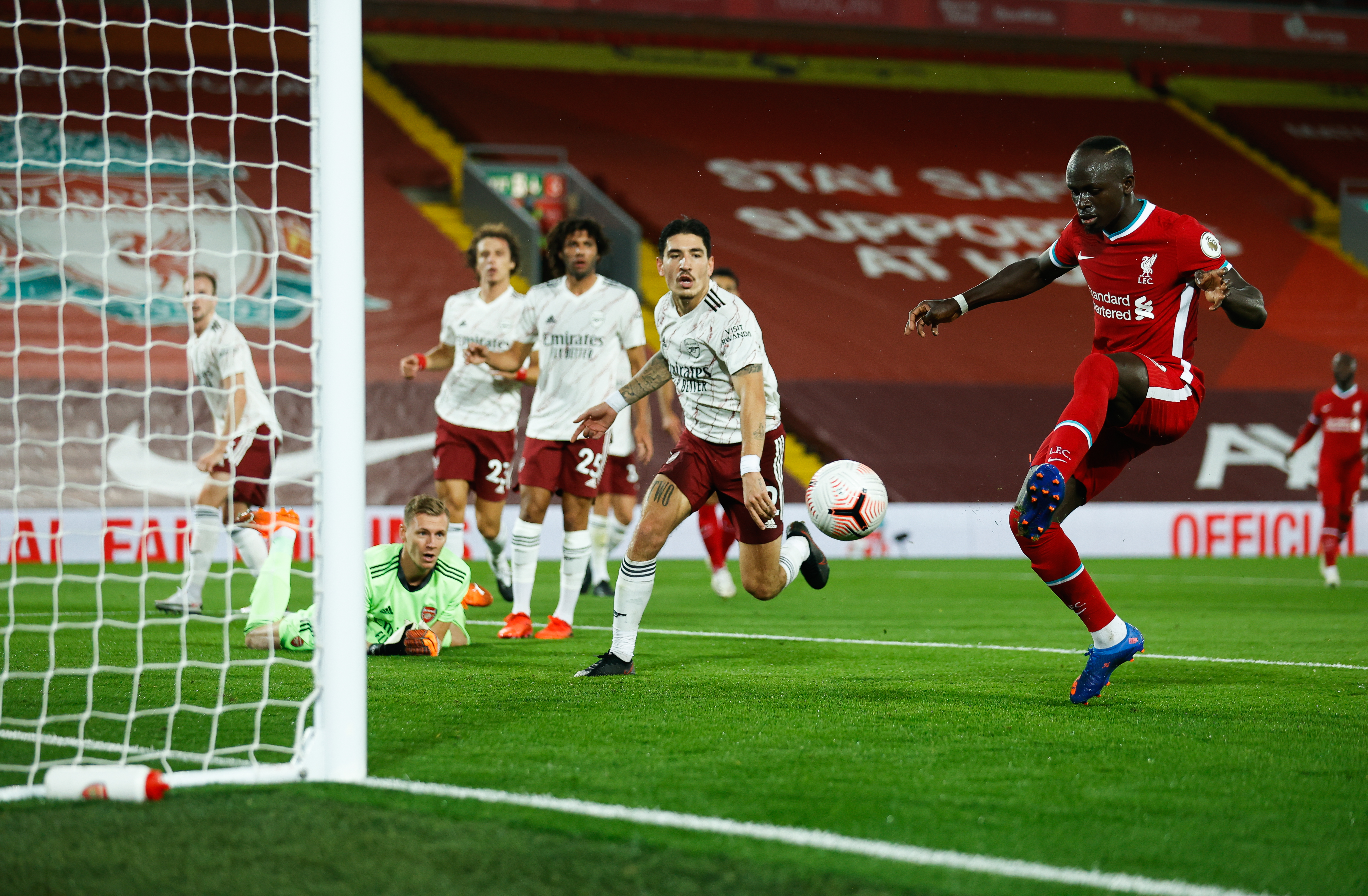 This was always going to be the ultimate test for a resurgent team at a ground where the Gunners have regularly been shredded in recent years.

Perhaps with that in mind, Arteta opted for a five-man defence and two holding midfielders, determined to be difficult to beat.

With Arsenal’s front three pressing hard too, Liverpool were forced to be uncharacteristically patient in their approach play, yet still they were dominant.

Inside two minutes, Mane – Liverpool’s two-goal hero at Stamford Bridge – was lucky to escape with a yellow card for lashing out Kieran Tierney with an arm in the face.

First David Luiz had to clear on the line from a Virgil Van Dijk header and then Bernd Leno made a smart save from Mane’s shot.

Then Alexander-Arnold had a pop himself, a deflected shoot which looped up onto the crossbar. 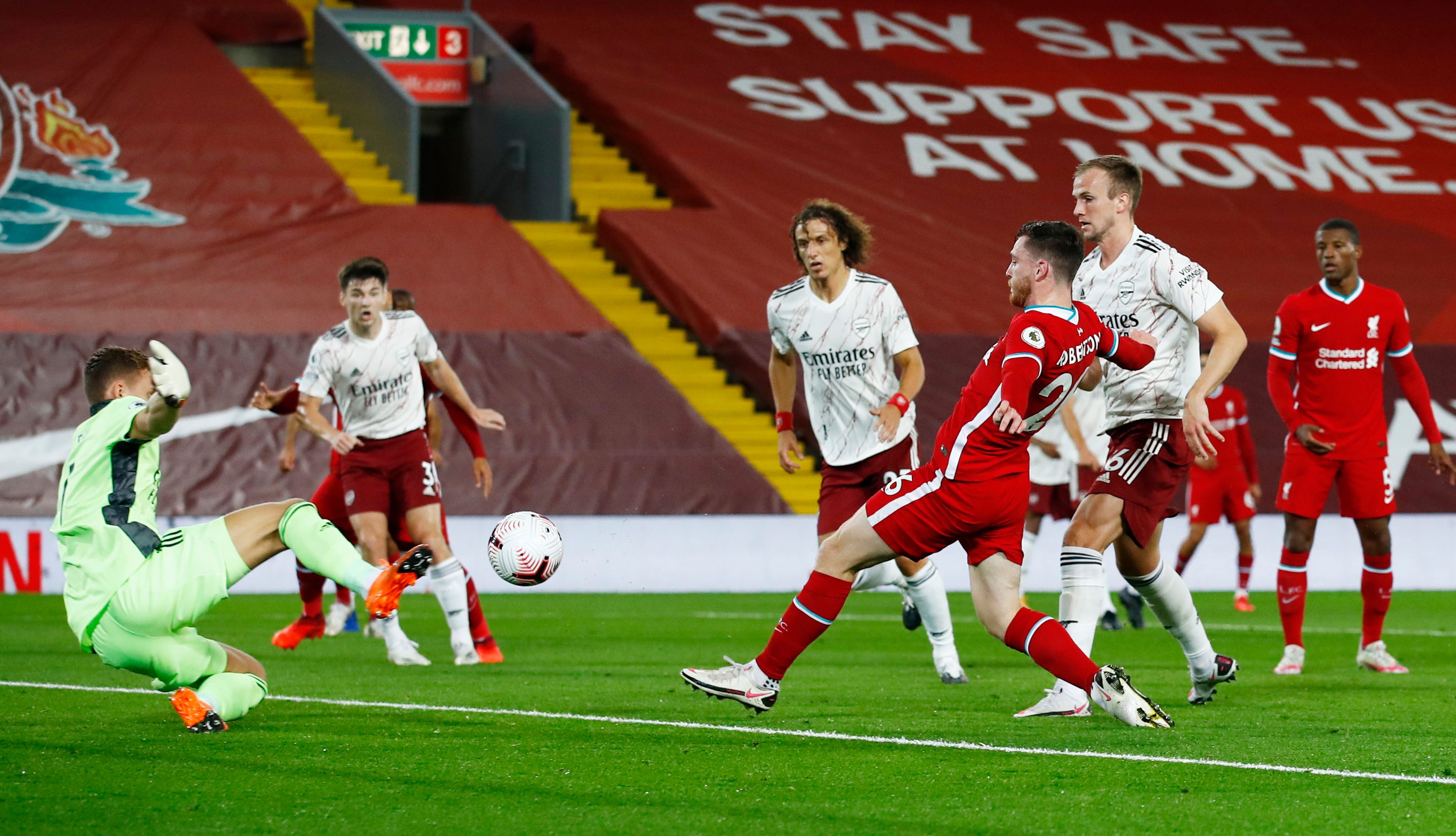 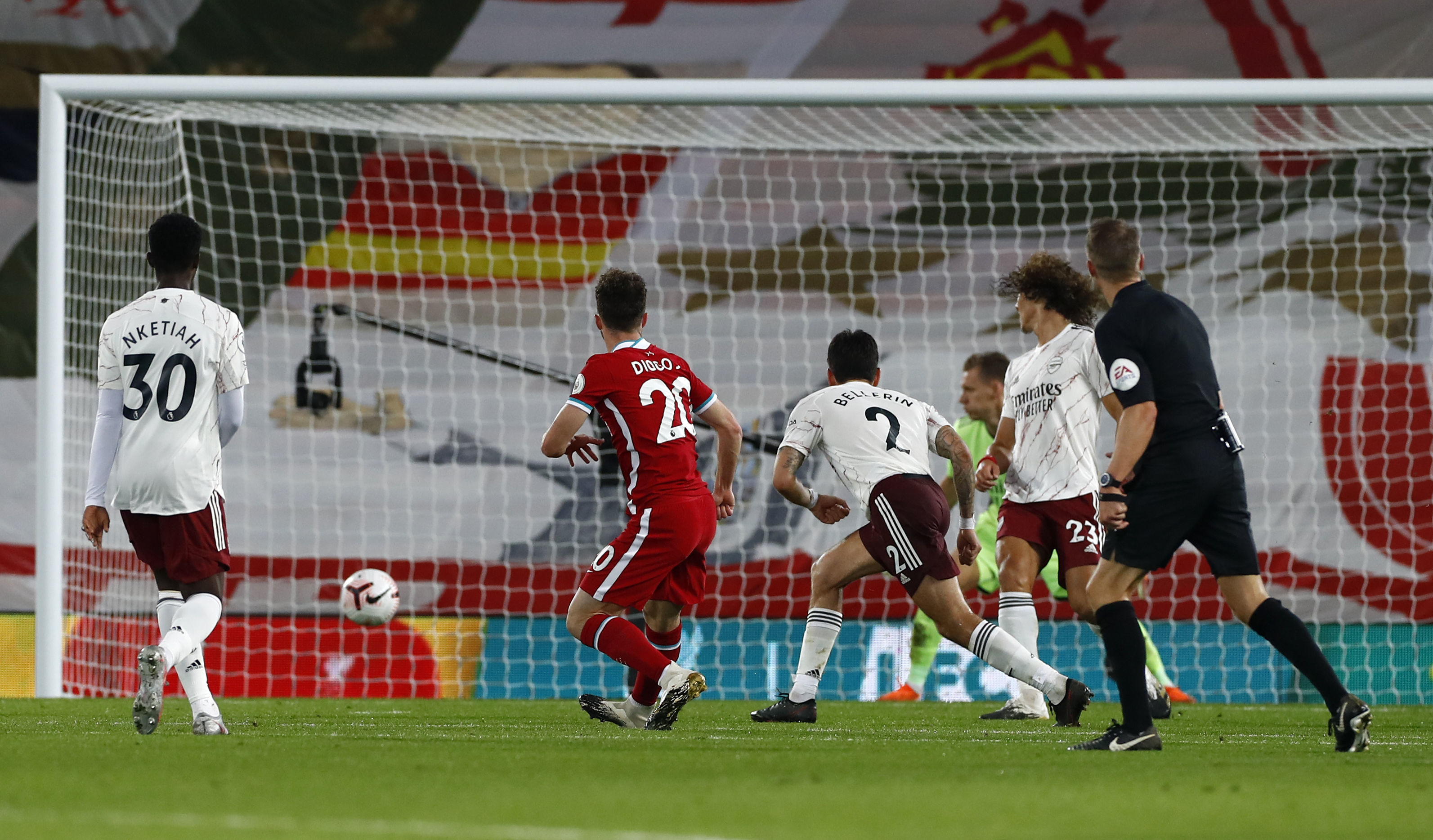 But, in keeping with this bizarre start to this season, Arsenal scored the 100th goal of the new campaign on their first proper attack of the night.

It was a swift break, Lacazette feeding Ainsley Maitland-Niles but the wing-back’s cross was met with a brainstorm from Andy Robertson who completely miscued an attempted clearance and teed up Lacazette for an easy finish.

You’d have put your house on a rapid Liverpool response and you’d have been right.

Two minutes later, ref Craig Pawson played a neat advantage after Luiz fouled Naby Keita, allowing Salah to skin Tierney and trigger a shot which Leno could only push for Mane to tap in.

Liverpool’s pressure was becoming overwhelming, in for a side set up to man the battlements.

And within nine minutes of his defensive blunder, Robertson put Liverpool in front.

Alexander-Arnold swung one in from the right and Arsenal’s defenders were all drawn into the centre leaving Robertson unmarked to prod home. 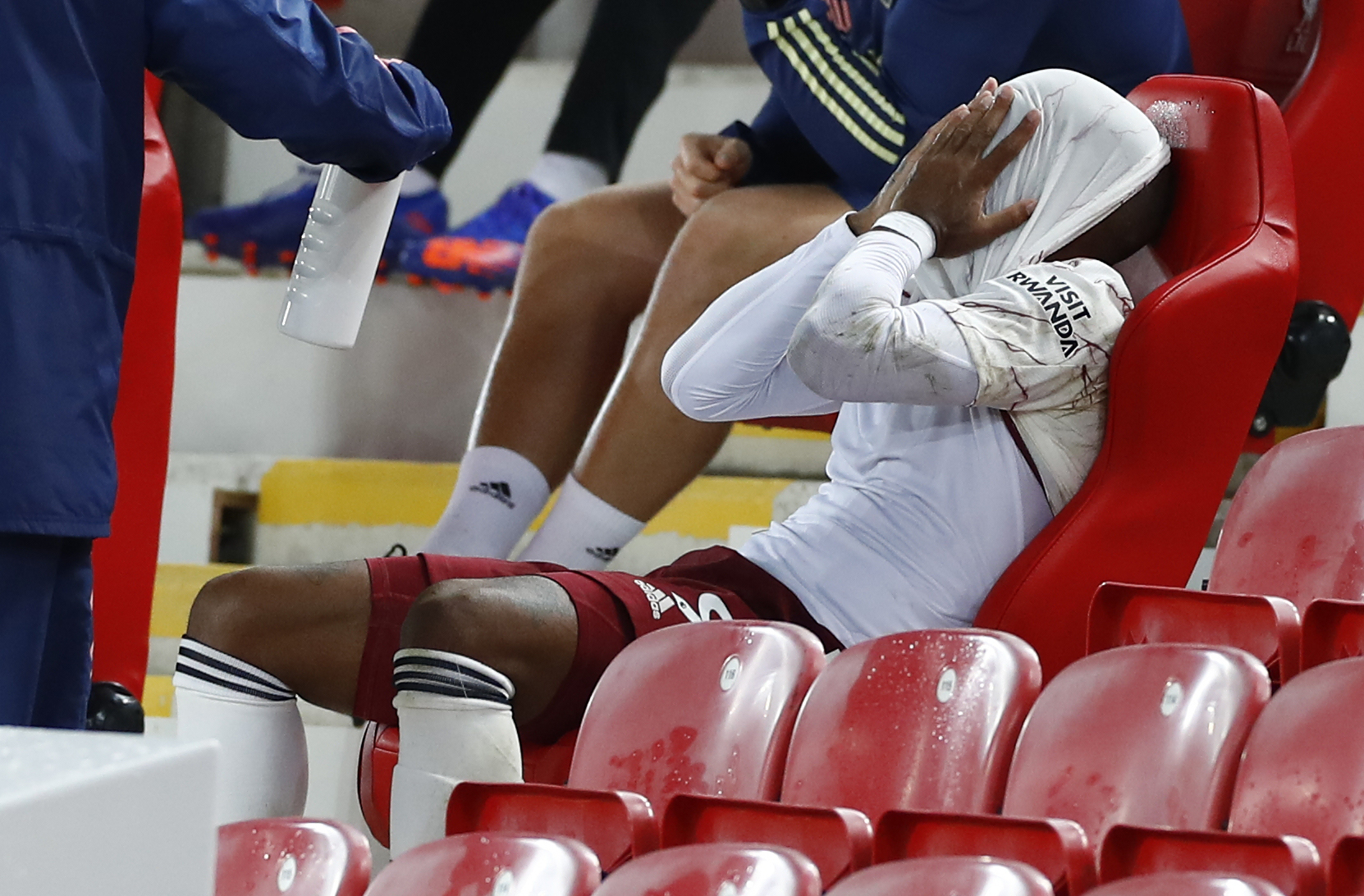 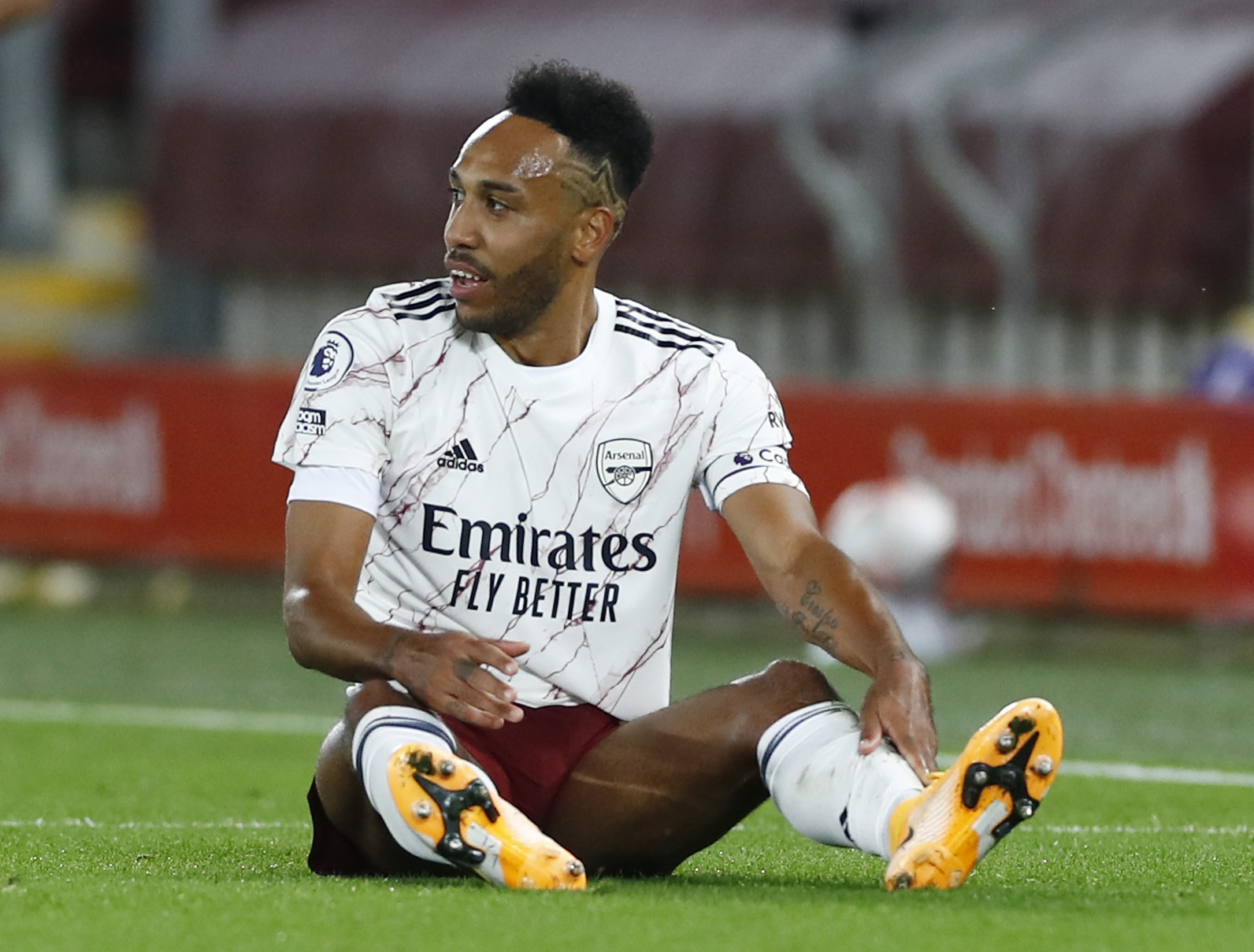 Arsenal actually had possession of the football for a decent stretch of time during the early stages of the second half.

And when sub Dani Ceballos produced an incisive pass for Lacazette, Allison had to come off his line to save with his chest when the Frenchman ought to have scored his second.

But Liverpool were straight back on to the front foot, Mane wiggling and swivelling and exchanging passes with Roberto Firmino but screwing his shot just wide.

Mane was irresistible at times and when Allison came out of his box to start a counter-attack, the Senegalese teed up Firmino for a shot deflected wide.

It was understandable that Mane looked disconsolate when Klopp replaced him with Jota 11 minutes from time – he had been Liverpool’s chief attacking threat.

Jota might have scored before he did, after a cunning diagonal pass from Salah but he could only find the side-netting.

Then came Jota's big moment as an Alexander-Arnold was cleared to the Portuguese, who controlled and sent a bobbling shot in off the post. 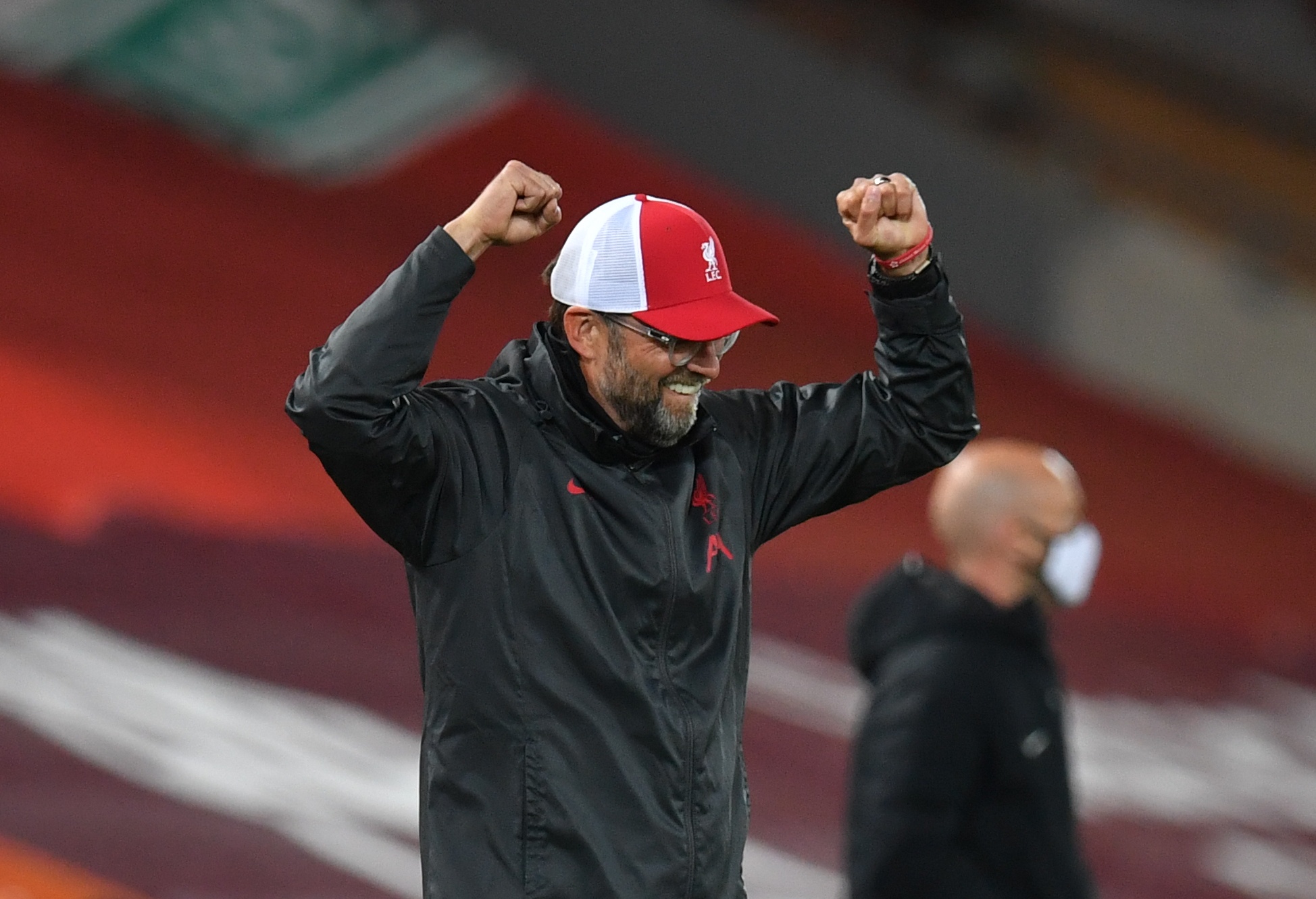 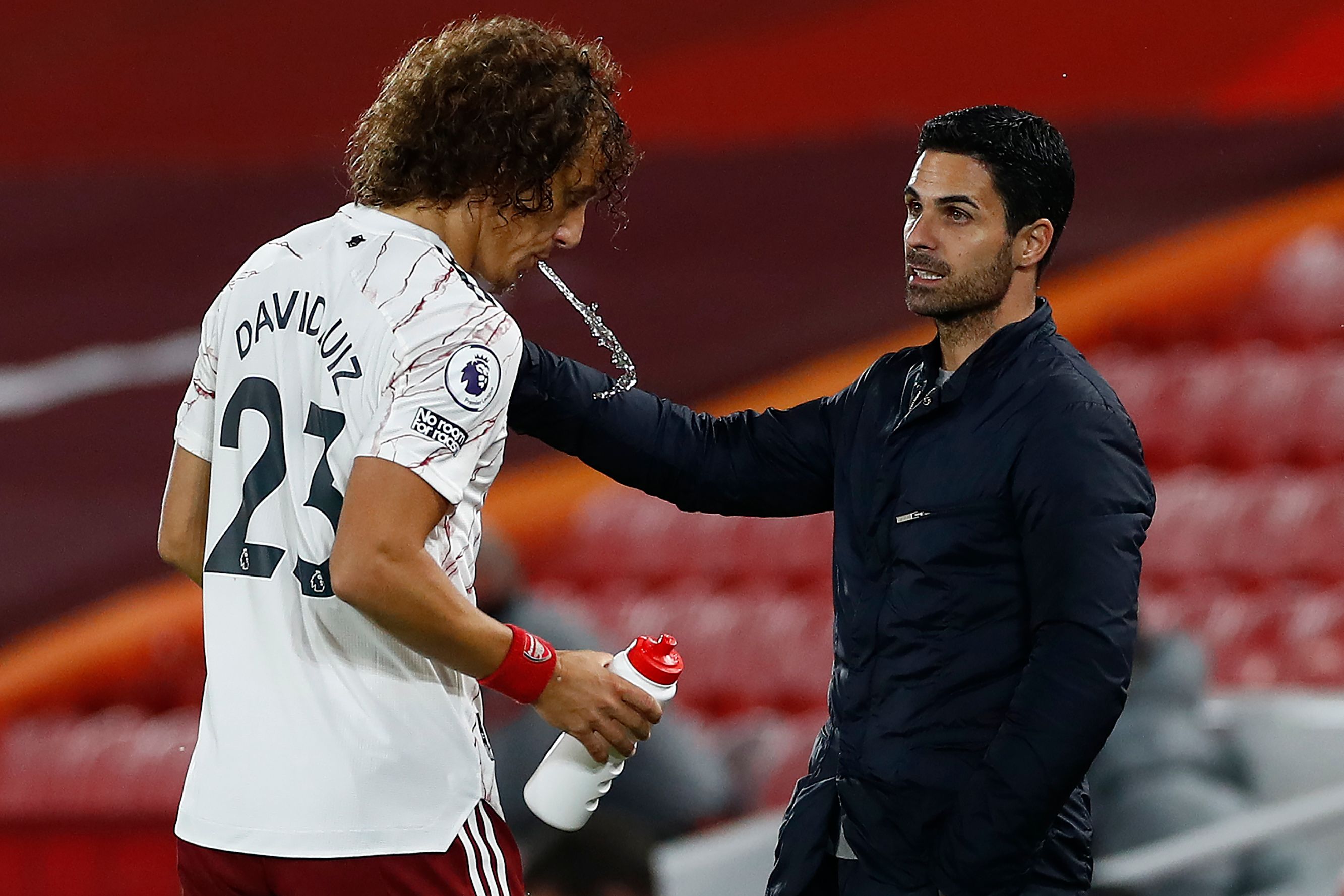