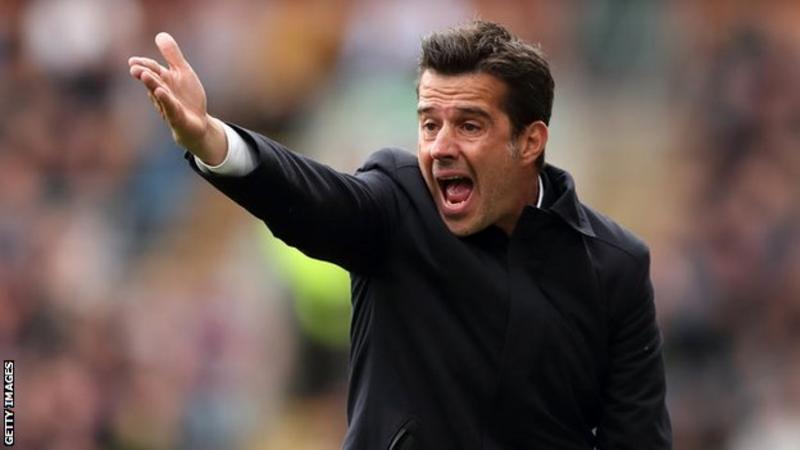 When Marco Silva described Everton’s meeting with West Ham United as “must win”, he was not simply trotting out a cliche – he was hoisting a warning flag for his own perilous position.

The 42-year-old Portuguese is under mounting pressure after a run of four Premier League defeats plunged a club with top-four ambitions into the relegation places.

It is not what Everton’s billionaire majority shareholder Farhad Moshiri had in mind when he sanctioned another significant summer outlay in the transfer market. It means Saturday’s game at Goodison Park is a potentially decisive day for Silva.

Is this Silva’s last chance?

Not necessarily – as there is a genuine desire at Everton to give Silva every chance to succeed.

The brutal reality, however, dictates that a comprehensive defeat to The Hammers, and the reaction to it, may force Everton’s hand.

Silva’s own words on 5 October following a 1-0 defeat at Burnley, where thousands of Everton fans made their feelings known as the manager walked to the dressing room, outlined the seriousness of his situation.

Everton’s starting line-up was acquired at cost of around £250m but looked uninspired against Sean Dyche’s cheaper ensemble.

The mediocre performances this season have included defeats by two promoted teams, away to Aston Villa and at home to Sheffield United, prompting serious concerns behind the scenes at Goodison Park.

Silva was set a pre-season target of European football. This meant a top-six finish or Everton’s first trophy since 1995.

Given the financial support he has received and the fact that Tottenham, Manchester United, Chelsea and Arsenal are in in varying states of transition, there were even aspirations of making the top four. 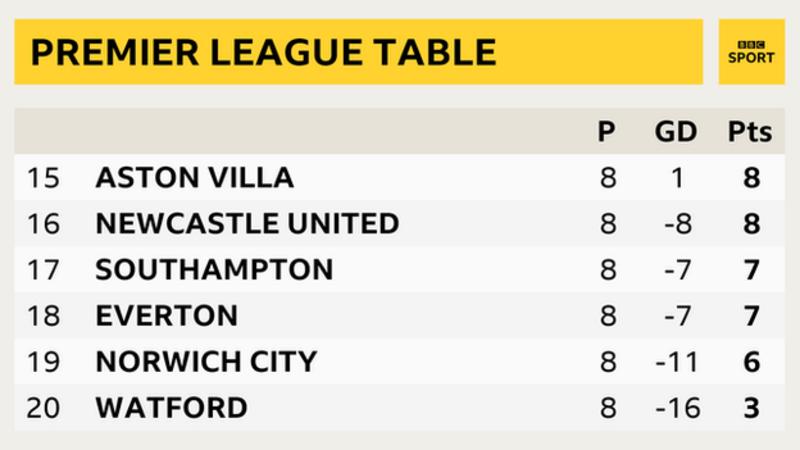 Instead, Everton have a meagre seven points from eight games. Only one of those fixtures, a 3-1 home defeat by Manchester City, was against one of last season’s final top six.

In a comparison to make Silva shudder, Everton are in a similar position to when Ronald Koeman was sacked – on 22 October 2017, after a 5-2 home defeat by Arsenal left them in 18th place, with eight points from nine games.

The fact it has unravelled so quickly and so unimpressively means Silva is now undoubtedly fighting for his future.

Everton, for now, have held their nerve. The hope remains that a good result against West Ham United will be a catalyst for improvement.

There is no huge appetite to sack Silva, but there is a realisation there are problems. He is also afforded protection, if only a little, by the fact there is no obvious replacement out there.

It could be that Silva survives a little longer even in defeat, but it is becoming increasingly clear that if West Ham is a “must win”. The Carabao Cup fourth-round home game against Watford on 29 October is a “must not lose” – because the competition offers an additional route to Europe.

If that chance slips away on the back of a poor league position, there may be no coming back.

Some who love Watford may relish finishing off Silva at Everton. Although the two clubs eventually settled a long dispute in February, there was acrimony stretching back to 2017, when Watford reported Everton to the Premier League for an alleged rule breach relating to an attempt to bring the Portuguese manager to Goodison Park.

Who could replace Silva?

Everton were badly burned by their mishandling of Koeman’s exit in 2017, sacking the Dutchman with no replacement lined up.

An approach for Silva was botched, and they turned reluctantly to Sam Allardyce, after a desperate run under caretaker-manager David Unsworth.

Allardyce signed an 18-month contract and ensured Everton’s safety but was sacked after six months with a reported multi-million pound pay-off, with fans hostile towards his style of play and displaying banners demanding his removal.

It was an expensive episode. Everton will want to avoid any repeats.

There have even been suggestions that, if Silva went, former manager David Moyes could hold the fort until the end of the season.

While Moyes may retain some level of admiration in Everton’s boardroom, it would a tough sell to bring back someone who left the club six years ago and has known little other than failure since at Manchester United, Real Sociedad, Sunderland and, to a lesser extent, West Ham United.

Moshiri once described England’s north-west as the “Hollywood of football”. He has spent more than £450m trying to make Everton a part of that glamour.

Moyes, for all his outstanding work, did not win a trophy in 11 years at Goodison. Bringing him back would hardly suit Moshiri’s plans, especially given the success that Jurgen Klopp is bringing to Liverpool.

Former Everton midfielder Mikel Arteta was discussed when Koeman was sacked but at this stage, would he be tempted away from his role as right-hand man to Pep Guardiola at Manchester City? He is also still untested as a manager.

Jose Mourinho, currently out of work, has been touted by some but this surely resides in the realms of fantasy. The name of former Liverpool manager Rafael Benitez has even gained traction among some fans.

Eddie Howe, a boyhood Everton fan, seems to enjoy life on the south coast at Bournemouth too much and could not be lured this season anyway.

Marcel Brands, Everton’s director of football, is a keen student of the European game, so could the longer term choice come from overseas? Marco Rose has guided Borussia Monchengladbach to the top of the Bundesliga in the early stages his first season and did so well at Red Bull Salzburg, and has a glittering reference from Klopp. Or perhaps there may be a candidate from Brands’ native Netherlands?

No-one jumps off the page – which may just be Silva’s saving grace for now.

Who takes the decision? 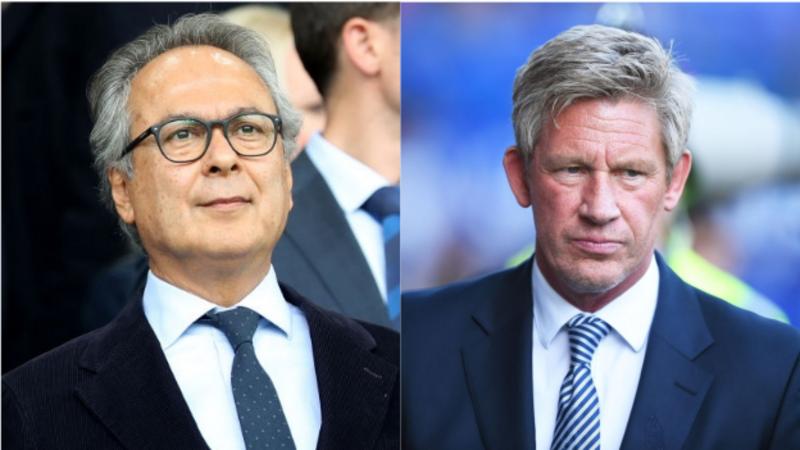 Brands, who arrived shortly before Silva, joined Everton’s board in January when, according to chief executive Denise Barrett-Baxendale, he was given “a broader remit responsible for the whole footballing strategy at the club rather than just player recruitment”.

In other words, Brands is the most influential footballing figure at Everton. He also provides a contrast to the impulsive Moshiri.

Brands prefers to keep emotion out of decision-making while Moshiri has shown an inclination to bend to the will of supporters, especially during times of discontent, and has sacked Roberto Martinez, Koeman and Allardyce since buying a 49.9% stake in Everton in February 2016.

Chairman Bill Kenwright will also have input into the next big decision although his shareholding is now only 5%.

It may well be, however, that Brands’ word will shape which way owner Moshiri goes when deciding on Silva’s future.

Silva fashioned a revival at the end of last season which saw Everton finish in eighth place, with home victories over Chelsea, Arsenal and Manchester United and a draw which damaged Liverpool’s title hopes, all without conceding a goal.

Worryingly, Everton have shown none of that attacking verve and defensive resilience this season, sparking only briefly in the 3-2 home win over Wolves on 1 September.

Idrissa Gueye has been hugely missed in midfield after leaving for Paris St-Germain, exposing a defence stripped of Kurt Zouma, who looked much more solid playing on loan at Everton than he has at Chelsea this season.

Gylfi Sigurdsson has been almost invisible, with main striker Richarlison not far behind despite two goals against Wolves.

Silva has also failed to integrate Moise Kean into his attack, despite the 19-year-old’s capture from Juventus being hailed by some as the transfer coup of the summer.

It has left Silva relying heavily on Dominic Calvert-Lewin for goals, and for all the young striker’s many attributes, consistent marksmanship is not among them. 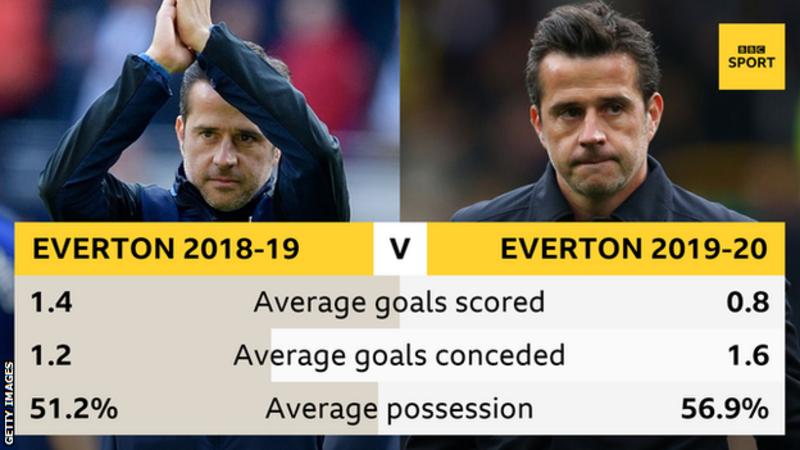 Silva seems bolted to his 4-2-3-1 system, inflexible and seemingly powerless to turn matches to get away from his team.

The main problems, however, are a lack of stomach for a fight and those old defensive failings.

Everton’s questionable character, as well as the manager’s apparent inability to turn the tide, is reflected in grim statistics.

They have gone behind in 26 games under Silva and turned it around to win only once, against League One Lincoln City in the Carabao Cup, going on to lose 20 matches.

In the Premier League, Everton have gone behind 23 times, winning none of those matches and losing 19.

Silva looks to have built an Everton team on foundations of sand, with the contrast in records home and away another indicator.

And then there is the return of Silva’s old Achilles heel: defending set-pieces.

Everton have conceded six of their 13 goals from set-pieces this season – the joint-worst record in the top division, shared with Watford.

Silva’s team have conceded 24 goals since set-pieces since August 2018. Only Watford, on 25, have done worse. It suggests he is struggling to find solutions either on the pitch or on the training ground.

There have been leaks that some players find his training sessions too long and laborious. But these are trademark complaints when a team struggles, especially from players who are not in the side – and word is the vast majority of Everton’s squad enjoy Silva’s work at their Finch Farm training base.

It not much use, however, when good work seems to disappear down a large hole between the training pitch and match day.

In defence of Marco Silva

Silva, rather like his predecessors, has been let down by a soft-centred group of Everton players who are happy to take little responsibility on the field and let the manager carry the can.

Everton’s strategy under Brands now is to buy for the long-term, with players who can be developed and have potential sell-on value. But with so many other clubs in flux, this summer might have warranted more buying for the here and now – within reason.

A short-term approach has not worked for Everton in the recent past so it is perhaps understandable that they refused to alter the model.

And while Brands rightly gets the credit for many good signings, Everton started the season with two major holes in the team.

No replacement was signed, or perhaps no-one presented to Silva’s satisfaction, to fill the gap left by Zouma’s return to Chelsea and Everton have still not replaced the goals of Romelu Lukaku, who left for Manchester United in July 2017.

Cenk Tosun was signed by Allardyce with this in mind but has not produced. The Turkish striker, along with Theo Walcott, is now part of £50m worth of deadwood bequeathed to Silva by his predecessor.

Richarlison has occasionally been used through the centre but looks more uncomfortable than when he is stationed in the wider positions.

While Everton lack players in key positions, they have also had to offload signings – made by previous regimes – who were not fit for purpose. Striker Oumar Niasse, who has made just 32 league appearances for the club since his arrival in February 2016, has not found a permanent taker.

Silva has suffered bad luck with injuries, especially with Jean-Philippe Gbamin – signed as the replacement for Gueye – now ruled out until the new year after surgery on a serious thigh problem sustained in training.

The silky Portuguese Andre Gomes has also been injured, as has £8m summer signing Fabian Delph, brought into add experience and leadership.

Everton’s woes cannot all be placed at Silva’s door – but he will know who will be forced out if results fail to change in the coming weeks.