MANCHESTER UNITED star Marcus Rashford has posted his first post-surgery photo after an operation on his shoulder.

The England star needed pain-killing injections throughout the Euro 2020 campaign, and decided the only option was to go under the knife. 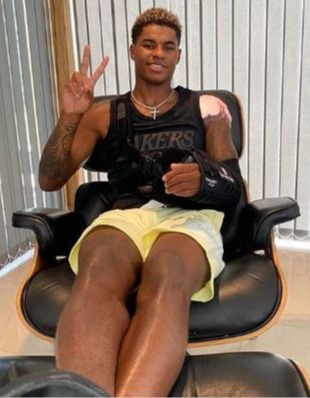 Rashford is not expected to be back in action for his club until October.

The 23-year-old shared a photo on Instragram showing his bandaged up shoulder.

He captioned it: "Thank you for all the well wishes.

"I had my surgery on Friday morning and everything went very well. A little sore but other than that I’m feeling good.

"Hope you’re all having a great day!"

Rashford had a scan after the Euros to determine the severity of the muscle tear in his shoulder he has been managing since last November.

The 23-year-old took pain-killing injections to ensure he was available for the Three Lions' journey to their Wembley defeat against Italy in the final.

Rashford will miss the season opener against Leeds on August 14 and could miss eight league games and three Champions League ties in total.

He could also miss five England World Cup qualifiers in September and October as well.

Solskjaer also has a number of other decisions to make before they kick-off the season at home to Leeds on August 14.

He will look at teenager winger Amad Diallo’s short-term future after he returns from Olympic duty with Ivory Coast.

Meanwhile, Axel Tuanzebe could be heading out on loan to Newcastle while Raphael Varane is in contention after signing on from Real Madrid.