For the second year in a row, COVID-19 has ended Missouri State's hopes of winning a Missouri Valley Conference tournament championship.

This time, the Lady Bears decided to back out.

With the Lady Bears anticipating playing in the NCAA Tournament, Missouri State administrators decided to withdraw from the remainder of the tournament after a positive COVID-19 case within its semifinal opponent's program.

"Our top priority is to be able to play in the NCAA Tournament," Missouri State athletics director Kyle Moats said in a release. "Our players lost that opportunity last year with the pandemic and the cancellation of the postseason. We have to ensure that our players and our staff get that opportunity this year."

A single positive result was discovered within Bradley's Tier 1 personnel as part of Friday evening's testing and subsequent contact tracing revealed that BU had enough available and non-impacted players and bench personnel to compete.

Moats said the team will return to Springfield on Saturday and prepare for the NCAA Tournament.

"This feels a lot like last year," MSU head coach Amaka Agugua-Hamilton added in a release. "It's very unfortunate but playing in the NCAA Tournament is a priority for us, especially after missing the opportunity last season. Although we will miss out on what could have potentially happened for us in Moline, we look forward to the Big Dance!"

OPINION:  Should conference tournaments end? 'Anxiety is an understatement'

COVID-19 PROTOCOLS:  What happens if a team has an issue before or during the NCAA Tournament? 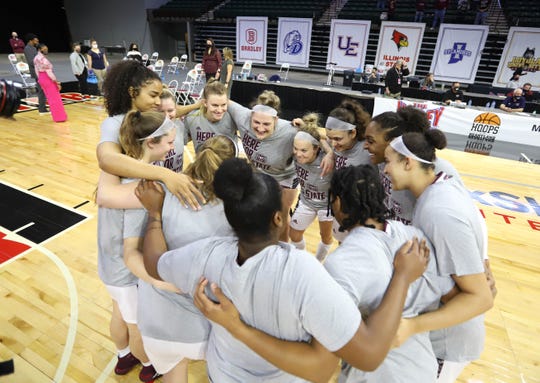 The Valley announced about an hour before the Lady Bears were set to tip off in the MVC semifinals against Bradley that the game would not be played as scheduled.

The game will be considered a "no contest" and not count as a forfeit.

Drake, which the Lady Bears could have played Sunday in a championship game, also had a single positive COVID-19 case and still is capable of playing in the tournament. Because the Bulldogs are the highest-remaining seed after the Lady Bears backed out, Drake advances to Sunday's championship while Loyola-Chicago and Bradley will play Saturday.

Missouri State, the 17th-ranked team in the country, still is expected to make the NCAA Tournament field with an at-large bid. The Lady Bears will learn their first-round opponent during the selection show Monday night.

The Missouri Valley Conference now has had games canceled in each of its two basketball tournaments.

The league didn't release a statement on the decision until around 7:30 p.m. It said a positive COVID-19 test from the previous night among UNI's Tier 1 personnel had knocked the Panthers out and advanced Drake to the semifinals.

With protocols from St. Louis City’s Board of Health overriding Valley procedures — a fact MVC commissioner Doug Elgin admitted was poorly communicated to the league's teams — data from UNI's KINEXON bracelets superseded everything else. The information collected from those bracelets eliminated too many Panthers from playing due to contact tracing.

"Anyone who advocated for not playing the game made a huge mistake," Northern Iowa coach Ben Jacobson said three days later at his regularly scheduled news conference.