Cleveland Browns defensive end Myles Garrett reportedly stands to lose more than $1 million for his role in a brawl with the Pittsburgh Steelers Thursday night, but that still won’t be the costliest suspension for an NFL player over bad on-field conduct.

The league suspended Garrett for at least the rest of the regular season Friday after he pulled Mason Rudolph’s helmet off his head and swung it at him. Larry Ogunjobi of the Browns and Maurkice Pouncey from the Steelers also were suspended and fined over the brawl.

But Garrett stands to lose the most over the incident: $1.1 million, according to Sportrac, a website that tracks professional sports salaries, fines and other financial info.

Here are the 10 costliest NFL suspensions for on-field incidents, according to Sportrac: 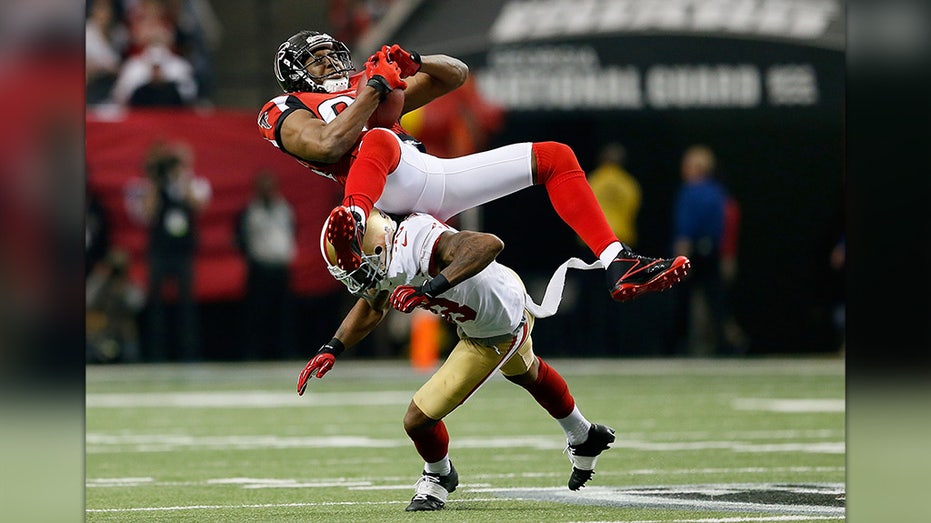 ATLANTA, GA – JANUARY 20: Wide receiver Roddy White of the Atlanta Falcons catches a pass as he is hit by free safety Dashon Goldson of the San Francisco 49ers in the first quarter in the NFC Championship game at the Georgia Dome on Jan. 20, 2013, in

Goldson, a Tampa Bay safety, was suspended for one game in 2013 for a hit on defenseless Atlanta Falcons wide receiver Roddy White. Goldson was fined for several hits that season, totaling $190,000 in addition to the money he lost during the suspension. 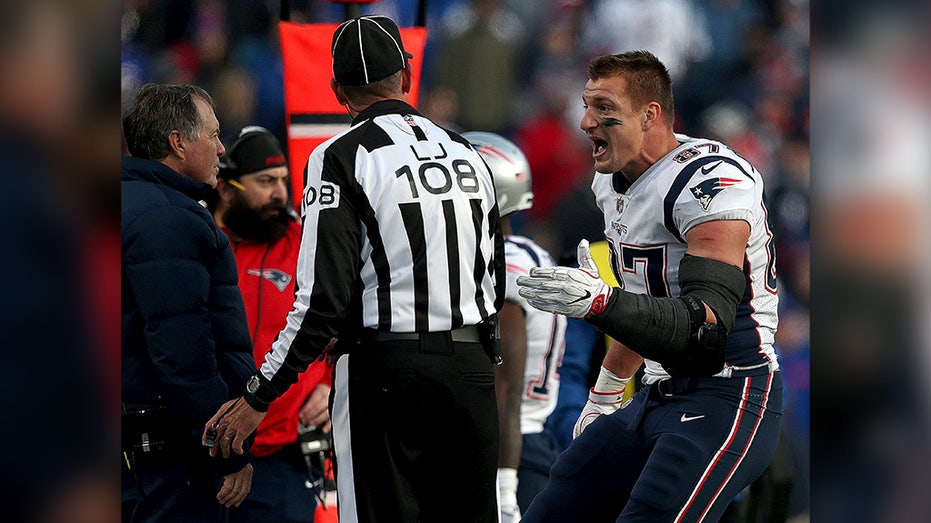 Buffalo’s Tre’Davious White was already down after intercepting a pass from Tom Brady during a 2017 game. But that didn’t stop Gronkowski from stepping over and dropping elbow-first on White. Gronk was penalized for unnecessary roughness and suspended for one game. 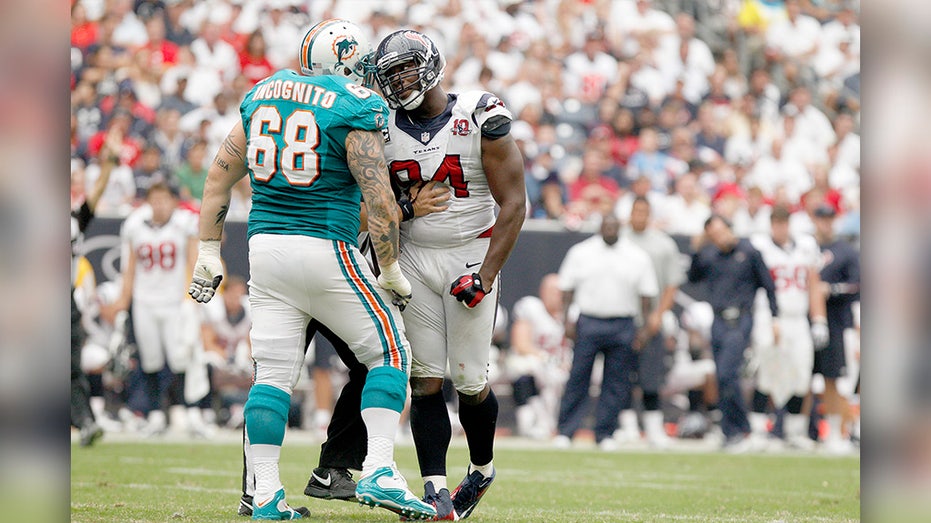 HOUSTON, TX- SEPTEMBER 09: Richie Incognito of the Miami Dolphins gets in the face of Antonio Smith of the Houston Texans after the play during the season opener at Reliant Stadium on Sept. 9, 2012, in Houston, Texas. The Houston Texas won 30 to 10.

In an incident reminiscent of this week’s helmet swing, the Houston Texans defensive end pulled off Dolphins lineman Richie Incognito’s helmet and hit him with it during a 2013 preseason game. The league suspended Smith for two preseason games and the first week of the regular season. 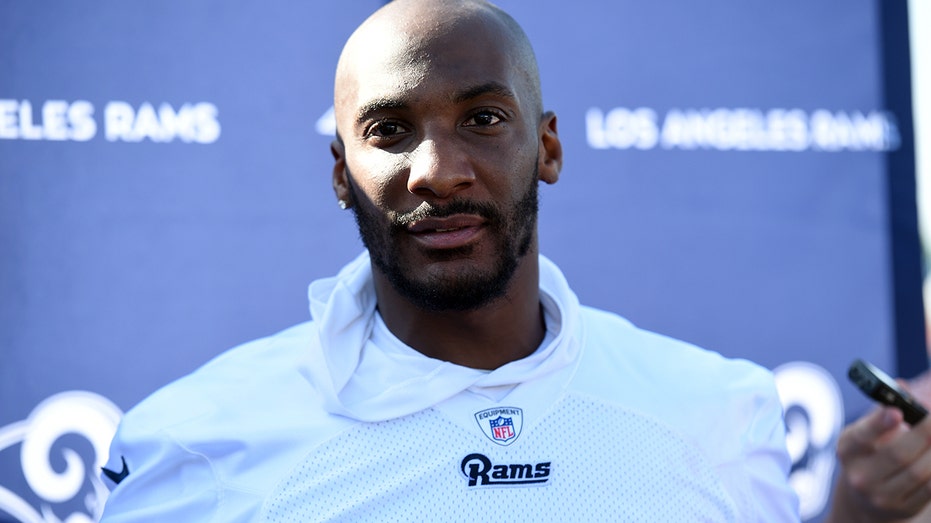 Aqib Talib takes questions from the media during the Los Angeles Rams training camp on July 26, 2018, at UC Irvine in Irvine, California. (Photo by Chris Williams/Icon Sportswire via Getty Images)

Dwayne Allen was having a tiff with one of Talib’s teammates during a 2015 game between the Colts and the Broncos when Talib walked up to Allen and poked him in the eye. Talib later told The Denver Post it was an accident, but he was flagged for unnecessary roughness and suspended for one game over the incident. 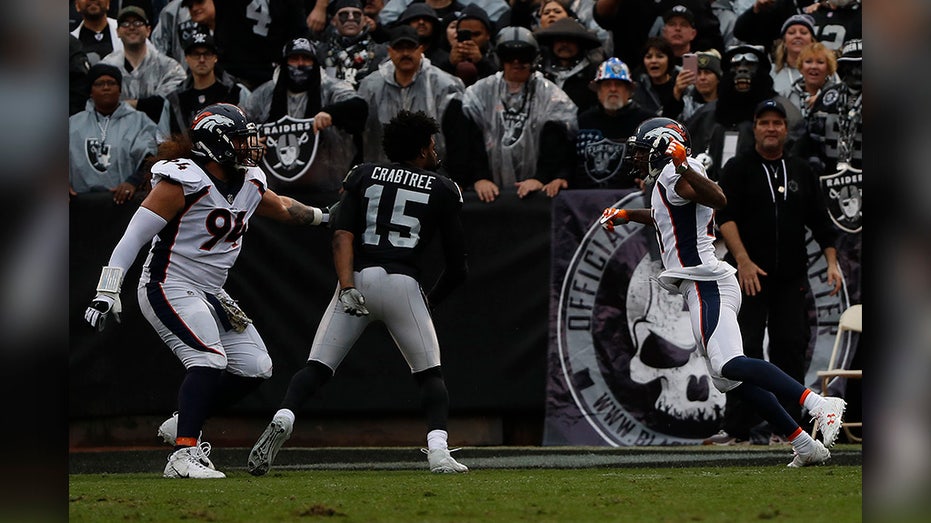 OAKLAND, CA – NOVEMBER 26: Michael Crabtree of the Oakland Raiders fights with Aqib Talib the Denver Broncos during the first quarter their NFL football game at Oakland-Alameda County Coliseum on Nov. 26, 2017, in Oakland, California. Both Crabtree a

There was no love lost between Crabtree and Talib before the Broncos faced the Raiders in 2017. But their beef exploded during that game after Talib yanked and broke Crabtree’s necklace — for the second time in less than a year. Their fight grew into a brawl as more members from both teams joined in. Talib and Crabtree were each suspended for two games over the incident. 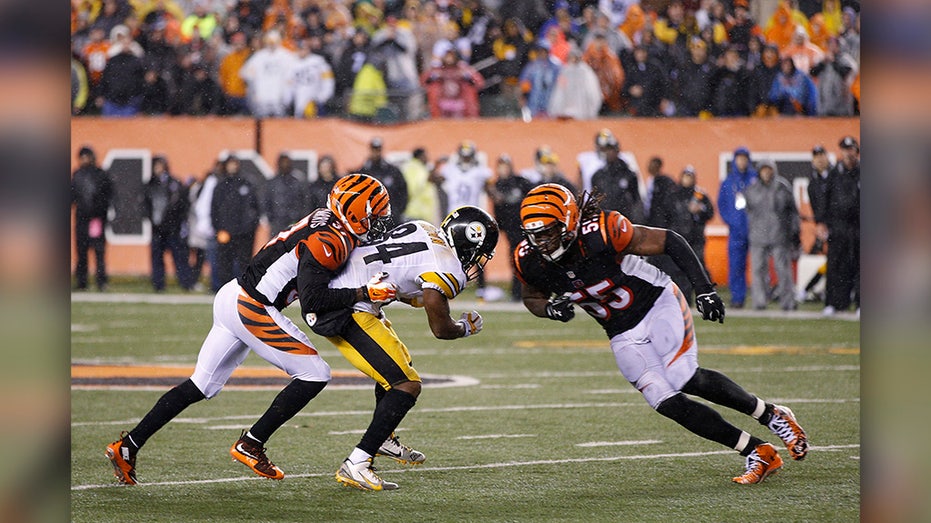 CINCINNATI, OH – JANUARY 9: Vontaze Burfict (No. 55) of the Cincinnati Bengals makes a late hit on Antonio Brown of the Pittsburgh Steelers to set up the winning field goal in the fourth quarter of the AFC Wild Card Playoff game at Paul Brown Stadium

MYLES GARRETT SUSPENDED IN BROWNS BRAWL: HOW MUCH MONEY IS ON THE LINE?

The Bengals were one point ahead of the Steelers during a 2016 wild card game with 18 seconds left on the clock. Pittsburgh’s Antonio Brown had just missed a pass when charging Burfict hit him helmet-to-helmet, giving the Steelers a first down. The Bengals fouled again on the next play, putting Pittsburgh in range for the game-winning field goal. Burfict walked away with a three-game suspension on top of the season-ending loss. 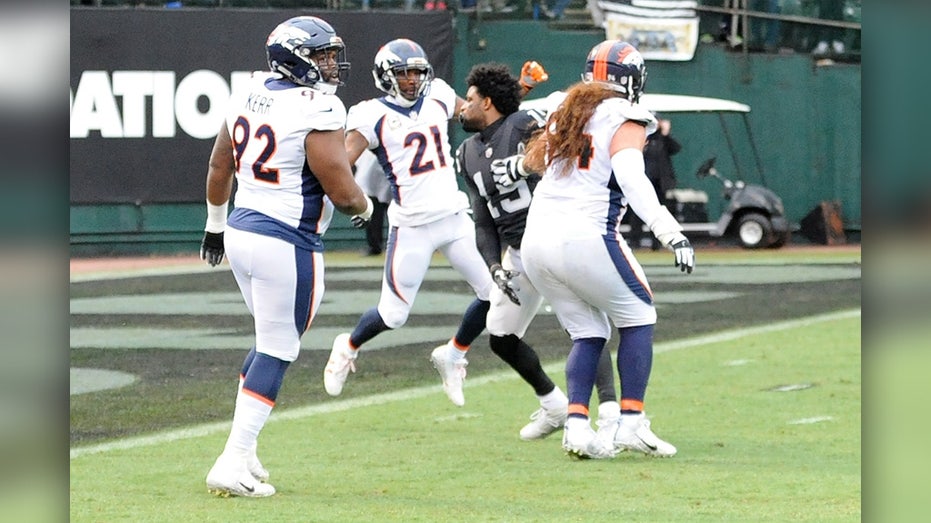 OAKLAND, CA – NOVEMBER 26: Michael Crabtree of the Oakland Raiders fights with Aqib Talib (No. 21) of the Denver Broncos in their NFL game at Oakland-Alameda County Coliseum on Nov. 26, 2017, in Oakland, California. Both players were ejected from the

Talib lost out on even more money than Crabtree over their 2017 fight. But in a happy turn, TMZ reported in March that the two squashed their beef at a Texas go-kart track. 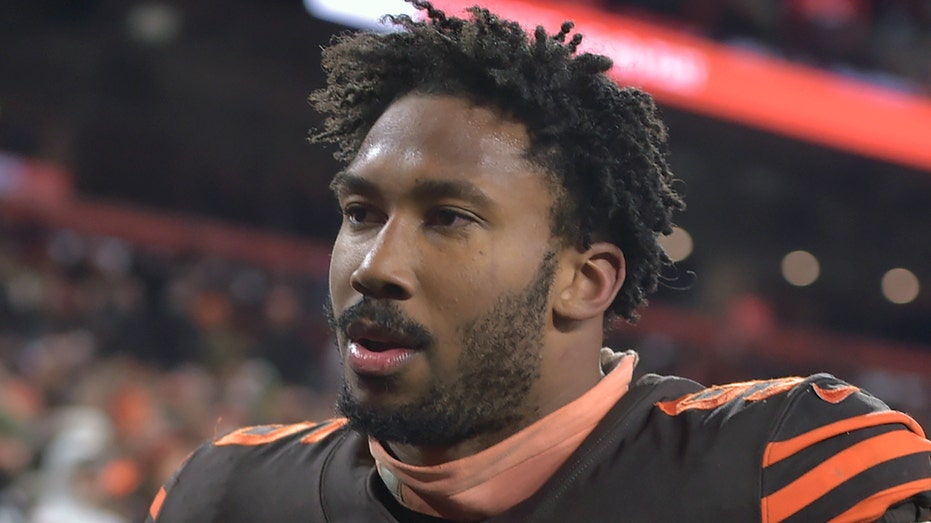 Cleveland Browns defensive end Myles Garrett walks off the field after he was ejected late in the fourth quarter of an NFL football game against the Pittsburgh Steelers, Thursday, Nov. 14, 2019, in Cleveland. The Browns won 21-7. (AP Photo/David Rich

There he is. Cleveland’s helmet swinger ranks third on the list, according to Sportrac’s data. Garrett issued a statement through the Browns on Friday apologizing for his “terrible mistake.” 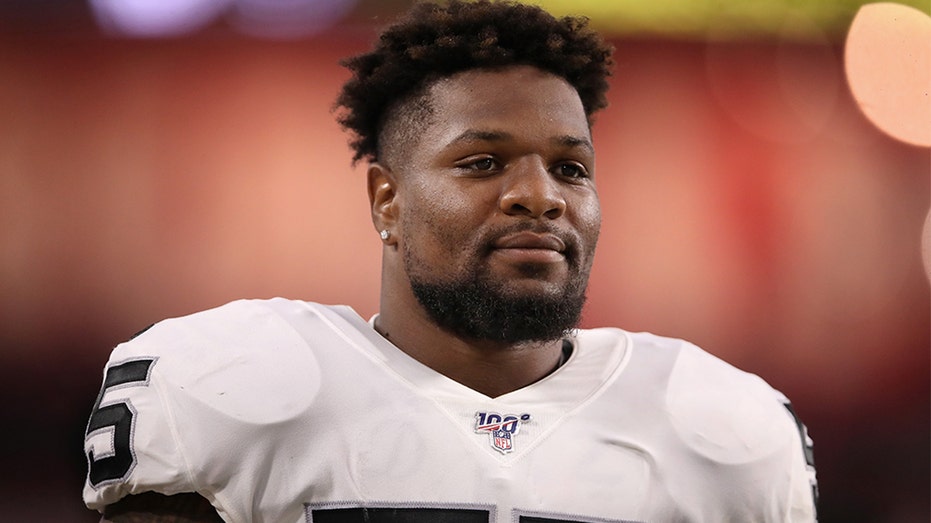 Now with the Raiders, the league suspended Burfict for the rest of the season in October after he was ejected for leaning down into a helmet-to-helmet hit on Indianapolis tight end Jack Doyle. It’s the longest suspension ever issued for an on-field incident, and league officials cited Burfict’s “extensive history of rules violations” in their punishment, FOX News reported. 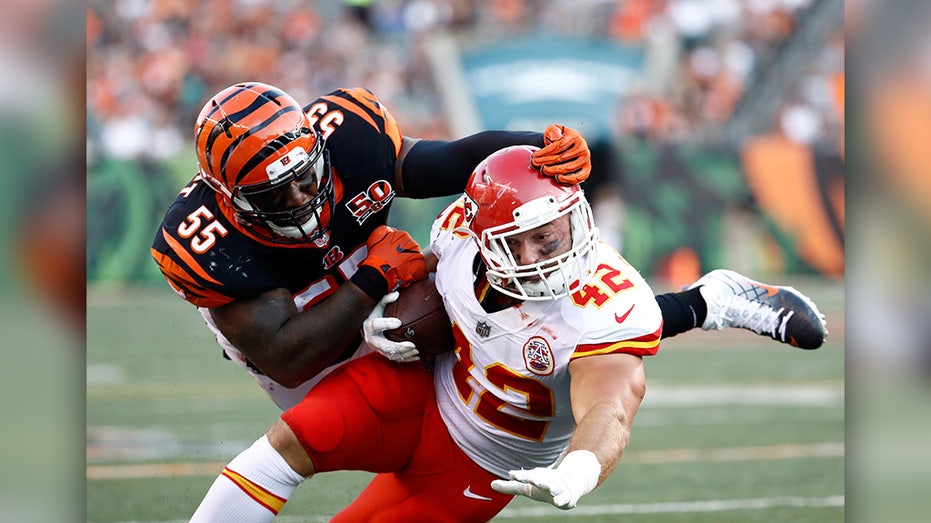 Speaking of Burfict’s history of rules violations, the linebacker picked up a three-game suspension — it was reduced from five games — in 2017 when he was still with the Bengals for a hit on Kansas City’s Anthony Sherman, who was ruled “defenseless” under a then-new rule.