The first Origin build-up of 2019 had a reconciliation theme. A tribute to Greg Inglis, rap from Briggs, Johnathan Thurston’s acknowledgement of country. The national anthem was given due respect, many players singing and several others young and free enough to stay silent.

Expectations were also breaking free of history, with two new teams stepping away from the well-trodden grooves of a decade. The old warriors were now squeezed into lounge suits and commentary boxes. Someone else’s turn now. And yet, in rugby league, Queensland and NSW are permanently unreconciled. The Origin rivalry, now 115 games old, has a remarkable capacity to renew itself. Queenslanders showed up for their team, as they always have, with the opposite of a whisper. The opening exchanges had the muscle and intensity that sets Origin apart from all other rugby league, and all other Australian sport. 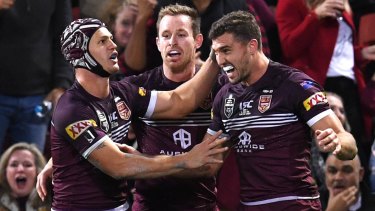 No.1 with a bullet: Queensland fullback Kalyn Ponga congratulates Corey Oates after setting up his try with a bullet pass.Credit:AAP

Much is attributed to emotion in this contest, but it’s always been the case that skill wins. And here, at half-time, an odd story was unfolding. In Cherry-Evans and Munster, Queensland had the skill advantage. Yet for the first half, the hosts also showed a clear skill deficit. Will Chambers managed to bomb two certain tries after Cherry-Evans and Munster put him through on the right side. On the left, Corey Oates, who like all wingers practises the leaping corner put-down like a tennis player his service, foot-faulted at his first attempt. Close to half-time, Cherry-Evans cannoned a clever chaos grubber-kick against the goalpost only for Dylan Napa to fluff the grounding. So much skill, for four missed tries! Were Queensland, the team that is never beaten, beating themselves? As the game built to its climax, the unusual moved towards the extraordinary.

Something old, something new, and one team leaving Brisbane feeling blue; a thrilling reconciliation of past and present.

Queensland poured through again and again as the mood became febrile. Oates did better on his second attempt, but Michael Morgan couldn’t get the ball down over the line, and then some interference from Latrell Mitchell stopped yet another seemingly certain Queensland try. Origin has rarely failed to excite, but this was becoming a game that challenged even this series annual extremes. 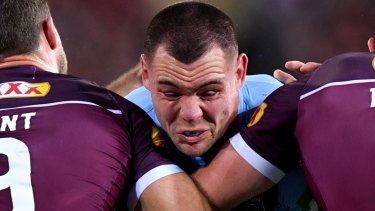 Iron man: David Klemmer was immense for the Blues in the first half.Credit:NRL Photos

A string of lucky bounces brought NSW to the cusp of a match-winning try, but the match-winning moment came to a toss of a coin. The Blues were set to score on their left wing, and Dane Gagai decided to go for an intercept, the all-or-nothing play. Gagai, whose own background, Maori and Torres Strait Islander, an All-Star on both sides of the Tasman, forms a neat reconciliation story of its own, pulled the right lever, grasped the ball and sprinted the length of the field. The only person in position to catch him was the referee. Minutes later, Gagai doubled up off a spearing Kalyn Ponga pass.

And that was it, the proverbial game of two halves. Almost. A late Jake Trbojevic try was a nostalgic trick, harking back to the first stanza, what seemed like hours earlier. Too little for NSW, if not quite too late. In the last moments, Queensland needed another helping of their famous desperation to hang on for a wonderfully entertaining win.

For all the fresh faces, there was a familiar feeling as Queensland came home. ‘One of the great Origin games,’ was all Paul Vautin could think of to say, so he said it again, and he was spot-on. Something old, something new, and one team leaving Brisbane feeling blue; a thrilling reconciliation of past and present. And future too, as this one left plenty to look forward to when the contest resumes in Perth.