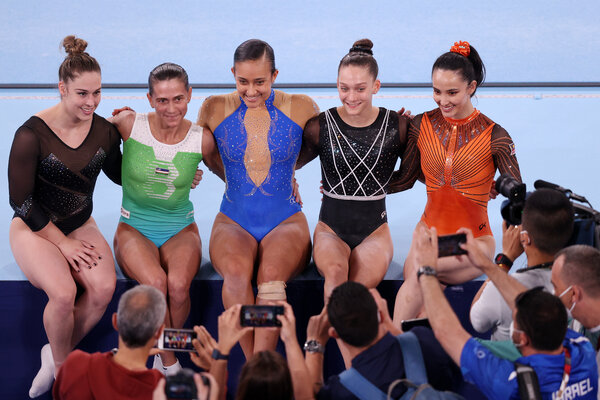 After Oksana Chusovitina, a gymnast competing for Uzbekistan, finished her practice session last week here at the Tokyo Games, gymnast after gymnast lined up to pose with her for a selfie. She is royalty in the sport.

Chusovitina is 46 — that’s not a typo — and has been at or near the top of her sport for three decades. Her son, Alisher, is 22, in college and older than many gymnasts in Tokyo.

This is her eighth Olympics, an astonishing streak in a sport geared for younger bodies. But she has shown that longevity and excellence is possible. At 33, she won a silver medal in the vault, her current specialty, at the 2008 Beijing Olympics. At 43, she finished fourth at the 2018 world championships in the vault. She said these days she trains about three hours a day and takes Sundays off all together.

Though Chusovitina has hinted at retirement for years, she said these Olympics would, in fact, be her last. She wants to spend time with her family, including her husband, who competed at the Olympics in Greco-Roman wrestling.

The most emotional moment in the arena was all for Chusovitina after she finished her competition on vault. In a counterintuitive, yet still quite poignant way, the lack of fans emphasized the earnest respect and admiration she clearly had from her fellow athletes and those with deep enough ties to the gymnastics world to be present for the competition. They were standing, cheering and angling for photos to wish her a fond farewell. She averaged 14.166 on her two vault attempts, a score not high enough to move on to next week’s final.

Chusovitina has represented several countries and entities at the Olympics, including the Soviet Union, the Unified Team and Germany. Her first Games were in 1992 with the Soviets, where she won a gold medal in the team event. Since then, she has won 11 medals at 17 world championships, and has had five moves named after her because she was the first to perform them at a world championship or Olympics.

On Saturday, Aly Raisman, a three-time Olympic gold medalist for the United States, posted a video on Twitter of Chusovitina performing a vault at the 1992 Olympics, two years before Raisman was born. She called Chusovitina “forever an icon.”