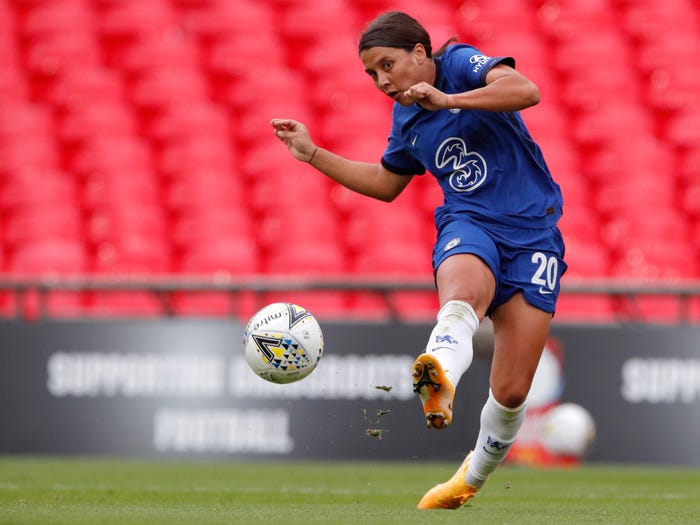 Sam Kerr is widely considered one of the most lethal offensive weapons on the planet, and on Sunday, she reminded the world why.

The prolific striker notched her first hat trick for Chelsea in the Blues' first game with fans at Kingsmeadow since February. Kerr's trio of goals — which came in the 15th, 55th, and 68th minutes — propelled Emma Hayes' side past West Ham 3-2 to extend Chelsea's record 28-game undefeated streak in the FA WSL.

But the Australian international suffered an injury before she could celebrate the impressive feat with her signature backflip goal celebration. Upon slipping her third goal of the day into the back of the net, the 27-year-old collided with an Irons defender, smashing her left hip and limping away from the goal in obvious pain.

Kerr's stunning performance Sunday came after the Matildas captain faced considerable criticism for her lack of finishing in recent Chelsea matches. Her first goal against West Ham broke a three-game scoring drought for the all-time goals leader in both the National Women's Soccer League in the United States and the W-League in her native Australia. Kerr now paces the Blues in scoring for the year and ranks third in the FA WSL in total goals on the season behind Arsenal's Vivianne Miedema and Jill Roord.

But Kerr's knock after her third goal of the day forced an early substitution in what constituted her best scoring performance in blue and white since joining the club in November 2019. Chelsea has not yet publicly spoken to the severity of Kerr's injury, so it remains unclear whether or not she'll be available for the first leg of the Blues' Champions League matchup against Portuguese side S.L. Benfica on Wednesday.