Multiple sporting organisations are up in arms after the International Olympic Committee announced breakdancing would be included in the 2024 Olympic Games for the first time.

But leading Australian breakers say they fully deserve their place in the Games. 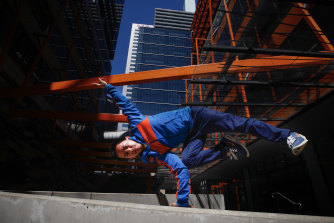 In Buenos Aires, Olympic competitors performed in "showcase" rounds before the best 32 went into battle rounds.

After a series of six turns each on the stage over a battle lasting 5-6 minutes, the competitors were assessed by a panel of judges and the winners went into a knockout semi-finals stage and finally a gold medal battle.

The inclusion of the sport also meant the Olympics will farewell baseball, which has major and minor league fans unhappy.

Netball fans also took to social media with anger over the decision, given the sport has failed to be recognised by the IOC after twenty years of lobbying.

Australian squash great Michelle Martin told AAP of her dissatisfaction with the decision on Tuesday after squash again missed out on inclusion, labelling the selection of breaking dancing as "a mockery".

But Napalan assured sporting fans that breakers are just as athletic as any other competitor fighting for the gold.

"The training that we undergo is pretty much on par with what you see with other sports, and that is thing that people don't really see," he said.

"I train a minimum 10 hours a week and that's on top of a regular job, but that's just minimum and I've been training since I was very young."

The IOC's decision to tap into the huge hip-hop world is part of their push this decade to get more young viewers interested in the Olympics.

"With the many options that young people have, we cannot expect any more that they will come automatically to us," Bach said.

Napalan believes the inclusion in the Olympics will get more young people not just participating but sticking around for the long term.

"It's quite hard to maintain kids in a sense of keeping them in breaking because parents would like them to go to something where they will hopefully get scouted for certain things," he said.

"Now it's like your kids can do that here, they can go all the way to the Olympics."

The IOC made a range of changes to the 2024 Olympic program at a meeting in Geneva.

By cutting some events and adding new ones, the 2024 Games will see full gender equity, with 50 per cent of the participants male and the other 50 per cent female. The number of mixed gender events will rise from 18 to 24 in Paris.

As previously flagged, the men's 50km racewalk has been cut and will be replaced by a mixed-gender event, which is yet to be determined by World Athletics.

The men's and women's K1 200m races have been scrapped and will be replaced by extreme slalom.

As a traditionally strong sailing nation, Australia will be impacted by the axing of the men's and women's 470 class. They will be replaced by a mixed 470 event and the addition of a new mixed kite-surfing event.

Weightlifting and boxing have both lost a number of events, with the IOC unhappy with the global governance if both sports.