He skipped the U.S. Open and hunkered down in Spain, but is ready to defend his French Open title. 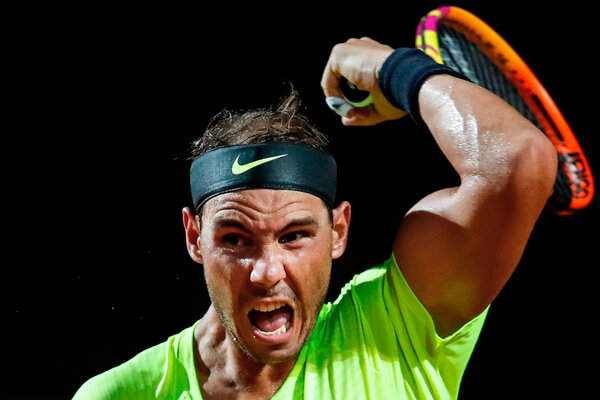 At some point during the second week of this year’s spectatorless United States Open, Rafael Nadal took to Instagram with a video.

While Nadal’s countryman Pablo Carreño Busta was suffering through a four-hour quarterfinal win over Denis Shapovalov, 21, of Canada, Nadal was on a red clay court about 4,000 miles away.

Nadal’s video showed him, cap on backward, trademark sleeveless T-shirt, sneakers scuffing the baseline tape. He was practicing with his friend Grigor Dmitrov, who had just flown to Nadal’s tennis academy in Manacor, Spain, after losing a five-set match in the second round at the Open. If Nadal suffered from any rustiness for not having played a tour match in more than six months, he didn’t show it. If he felt a hint of regret at not defending his Open title, he gave no indication.

What Nadal did in that short clip was send an emboldened message to all challengers that even if he didn’t feel comfortable coming to the United States to compete during a global pandemic, he was more than ready to defend his 12 titles at the French Open.

“When you take positions, you accept and you have to go with everything,” Nadal said from Rome last week, where he returned to play at the Italian Open. “I had to decide one thing for me, my family, everything.”

He won his first two matches there over Carreño Busta and Dusan Lajovic, dropping six games, before being upset in the quarterfinals by Diego Schwartzman of Argentina, the eventual runner-up to Novak Djokovic.

While some players have had access to practice facilities, and others signed up for exhibition tours in Europe and the United States, Nadal was hunkered down with his family in an apartment in Majorca.