The win at Surf City comes two weeks after the 30-year-old clinched the World Surf League title at Rottnest Island in Western Australia. 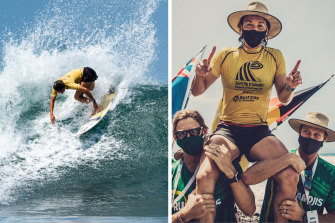 “This is a great runway heading into Tokyo 2020,” said Fitzgibbons, who became the event’s first three-times winner in an individual category.

“This event has been an unreal platform to test our mental strength.”

Fitzgibbons won gold with a score of 14.10 points, finishing clear of Portuguese surfers Yolanda Sequeira (9.20) and Teresa Bonvalot (9.04) and Peru’s Daniella Rosas in the four-woman final.

The World Surfing Games was the final qualifying event ahead of the Tokyo Games, where surfing will make its Olympic debut.

Japan’s Hiroto Ohhara beat compatriot Shun Murakami in the men’s repêchage final to become the last of the 40 surfers to qualify for the Olympics.