Caeleb Dressel’s record time disappeared from the scoreboard at Budapest’s Duna Arena almost as fast as he could check it, vanishing as if it were an unsightly stain wiped clean by an unseen hand.

The scoreboard was not malfunctioning. In fact, it was working to perfection.

While the potential of six-figure paydays was probably the most powerful draw in luring some of the world’s top professionals to the International Swimming League’s Budapest bubble this fall, so, too, was a format that put racing above records. After each event, the scoreboard purposely flashes the results for only a few seconds and then erases them, leaving only the order of finish beside the racers’ names.

The change has confused fans, but the athletes aren’t complaining. In a year of closed pools, disrupted training and canceled competitions, it has been liberating, several top swimmers said, to be freed from the tyranny of times.

“It is a huge relief to not be able to really compare times to what I’m used to doing,” said Abbey Weitzeil, who has twice broken the American record in the 50-meter freestyle in Budapest.

“It’s a huge opportunity for us to turn our brain off the clock,” she added, “and just race.” 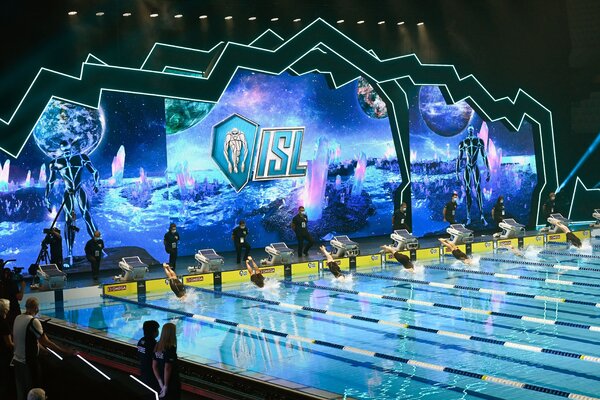 For Dressel, who was poised for stardom at the Tokyo Olympics in July before the Games were pushed back to next summer, the I.S.L. races have transported him back in time, to his swimming origins at recreational league meets in Jacksonville, Fla. Back then, he got his start by jumping into an unoccupied lane at one of his older brother’s meets, stroking to the other side of the pool and exclaiming: “I won a medal! I won a medal!”

Many more medals would follow as Dressel, 24, rewrote the national age-group record books. But he soon found himself consumed by the clock, distilling hours and days and weeks of training down the fractions of a second he needed to break the marks then held by the 23-time Olympic gold medalist Michael Phelps.

In 2019, Dressel broke his first long-course world record, in the 100-meter butterfly. But he said he was convinced he could have lowered the record two years earlier if not for his preoccupation with the clock. “I was so caught up in Michael’s time instead of what I was capable of going,” Dressel said.

The I.S.L. races, he and other swimmers said, have been a welcome diversion from record mania and personal-best blues.

“Mentally it gives you a break from overemphasizing times and numbers,” said Lia Neal, a teammate of Dressel’s and a two-time Olympic medalist. “Rather than constantly trying to go a best time, you can be in the moment.”

The problem is that elite swimmers are programmed to measure their daily progress by the ticks of pace clocks, scoreboards and stopwatches. From the time youngsters cast their eyes on “A” standards or age-group records, an obsession with the clock is swimming’s time-honored tradition.

“We lose a lot of sleep over hundredths and tenths of a second,” the Australian sprinter Cate Campbell said.

The sport’s Big Ben is Michael Andrew. Andrew, 21, was the most decorated age-group swimmer that USA Swimming has ever produced, setting more than 100 national age-group records. But when he was asked if he could remember the last time his focus was on racing instead of times, Andrew was stumped. “I don’t think ever,” he said.

“As a competitive person it’s in my DNA to think times, records, all that,” he added. “I don’t think that I’ve ever focused on just doing what I can to hit the wall ahead of the guy next to me.”

The downside of always racing against the clock is that the clock ultimately wins. Everyone eventually hits a plateau. Not even Phelps was immune; while he continued to collect Olympic medals by the handful late in his career, he didn’t post a best time in any of his primary events after 2009.

But Phelps’s appetite for racing kept him from falling into the trap that ensnares those who are captives of the clock: Their victories can start to feel like failures.

Mark Schubert, a three-time U.S. Olympic coach, said he remembered having to console Mary T. Meagher at the 1984 Los Angeles Games after her gold-medal swim in the 100-meter butterfly because her winning time of 59.26 was well off her world record.

“I thought, What a tragedy,” Schubert, the head coach of the Mission Viejo Nadadores, said in a telephone interview. “You win a gold medal. You win the Olympics. Wasn’t that your dream?”

At the same Olympics, Meagher’s United States teammate Rick Carey was glum after his victory in the 200-meter backstroke. As he explained at the time, his performance “was two seconds from my best; I don’t find this satisfying.”

In a year when simply finding an open pool has sometimes been difficult, Dressel said that he had embraced the I.S.L., which will conclude its second year this weekend, because it has offered the rare chance to keep his focus where he believes it belongs. The records — Dressel recently became the first swimmer to break 50 seconds in the 100-yard individual medley — have still come, but this fall they have been a bonus, not the goal.